Flooding in Washington Brings Death and Devastation to Dairies 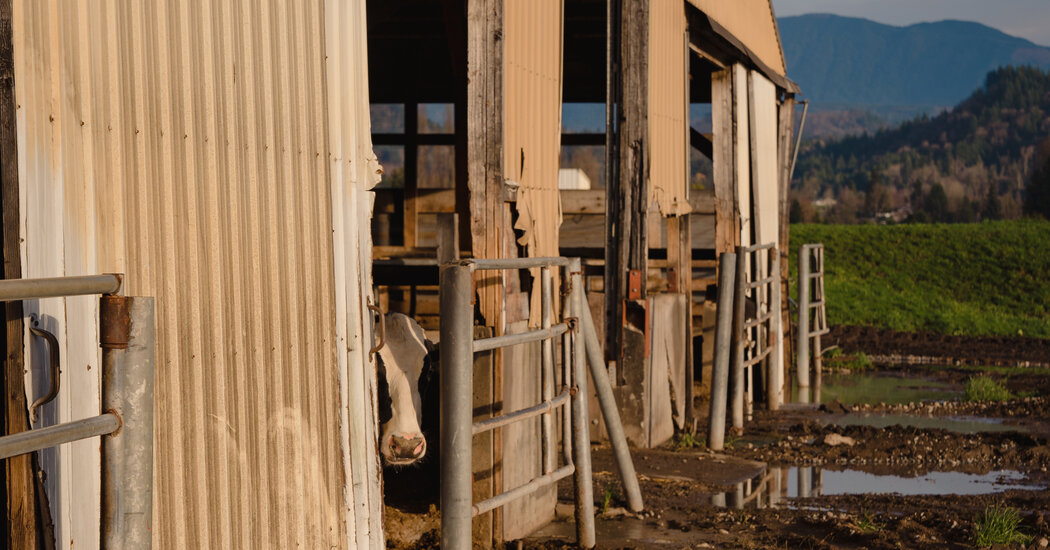 SUMAS, Wash. — Cattle bellowed in fear, chest-deep in icy waters. An electronic grain-distribution system that feeds tens of thousands of farm animals across Washington State sat wet and useless. In the town of Lynden, the Lagerwey farm had turned into an island, shrinking by the minute against the ferocious rise of the Nooksack River.

The cattle weren’t the only ones scrambling to escape: About a third of the employees on the hardest-hit part of Doug Visser’s dairy operation in nearby Sumas saw their homes ruined or destroyed. The workers, at least, lived. Dozens of cattle across the valley perished.

Any disaster is a mixture of small things and large ones. But the floods of recent weeks in northwestern Washington State, with rivers overflowing their banks after a month of record-setting rainfall, came at a deeply vulnerable moment, when the economics of the Covid era had already driven up costs, strained labor supplies and severed supply chains for everything from animal food to fuel to equipment and parts.

An environmental crisis collided with the worsening economic challenges, each disaster making the other worse.

“We were already kind of stumbling going into it,” said Scott McKnight, the owner of Conway Feed, a century-old feed farm company about an hour north of Seattle. “Production lines were behind. We were kind of maxed out on the hours we run. People were maxed out.”

Washington is the nation’s 10th-largest milk-producing state, with dairy products generating $1.2 billion a year. The kind of powerful atmospheric river storms that hit during October and November, scientists say, are becoming more intense as climate change delivers a greater share of precipitation as rain instead of snow.

Jordan Baumgardner, who runs 260 milk cows outside of Mount Vernon, said the sound of the flood still haunted him. He had gone to bed thinking that the animals were safe, penned in at the highest point on the farm, even as the Skagit River, which usually flows placidly by within sight of the farm, was reaching its crest that late November day.

But the cows, driven by instinct or panic, had done the absolute wrong thing during the night — they broke through the fence and headed downslope toward the milking shed, a place they had come to associate with shelter and food. The water was about five feet deep when Mr. Baumgardner and his brother got there around 5 a.m. The cows were packed in together, panicked and bellowing in the frigid water. He watched some give up, roll over and go down into the water to drown.

“The cows were just screaming at me. It was, it was just total chaos. And there was nothing to deaden the sound,” said Mr. Baumgardner, 31, a soft-spoken, second-generation herd manager.

On a recent morning, he stood in the muddy shed, hands thrust deeply into the pockets of his coveralls and fighting back tears. He described how he and his brother had pushed and screamed back, trying to get the animals to move out of the shed and up to higher ground before being forced to retreat to save themselves. Forty-four of his animals did not make it out.

Jason Hoekstra, the chief executive at EPL Feed, just south of the Canadian border in Sumas, said the scope of the disaster became clear to him during the night after the first river crest when the electronic system his plant depended on to measure out the precise feed formulas for each customer — unique to nearly every farm — went down. Three feet of water had surged into the electrical room.

EPL is one of the largest feed suppliers in the state, feeding animals on more than three-fourths of the farms west of the Cascade Range; the disaster was suddenly a threat to feed supplies as far as Chehalis, 200 miles south.

“The scary thing for me was really that we couldn’t get feed to the livestock,” he said. “We’ve suddenly got a hundred thousand dairy cows up and down the Cascades that are suffering.”

The electronics supplier he works with had none of the components needed to repair the system. Finally, one of his employees, working through the night, found a company in California that had exactly 10 of the components in stock. The plant needed all of them.

“I don’t care what it costs, get them on a plane,’’ Mr. Hoekstra said he told his staff.

Shuttled to a Seattle-bound Southwest Airlines flight, the parts arrived at 10 p.m. on the Friday before Thanksgiving, handed off by a delivery driver who had made it through the checkerboard of closed and flooded roads.

Economists and industry experts said the cost of the floods was hard to figure because it was still rising, even as the floodwaters recede, and the economic stresses have multiplied in several directions.

“It’s not just one factor, right?” said Lee Schulz, an associate professor of economics at Iowa State University. “We’re seeing feed prices 30 percent higher, we’re seeing certainly wages and labor costs are much higher. Fuel is much higher. You can really go across the board.”

Washington’s interim state veterinarian, Amber Itle, whose office is part of the State Department of Agriculture, grew up on a dairy farm. She said the trend toward consolidation and labor-saving technologies — smaller farms swallowed up by larger operations, greater dependency on robotics — had created potential choke points when one piece of a tightly wound system goes down.

“There’s a lot of benefits to consolidating and being big and being efficient and using technology, but there’s also weaknesses for food security,” Dr. Itle said.

But no one who has hitched a fortune and future to a herd of dairy cows has ever expected it to be an uneventful proposition.

“I think the guys that are in it now, they’re pretty much not doing it to make money,” said Mr. Visser, the farmer in Sumas. “They’re doing it because they love it.”

Dustin Lagerwey, whose family sold part of the farm in Lynden to fund his father’s retirement from farming — dozens of homes now rising where the cows once trod — said the dairy operation represented tradition, more than anything else. “I pay the bills, and I have a little bit left over sometimes,” he said with a laugh.

Mr. McKnight at Conway Feed said that his company, less affected by the floods than EPL, agreed to pick up some of EPL’s customers during the crisis to hold that company over, bridging the gap until repairs could be made, but that his shop could not really produce more than it does now.

The disruptions to feed supplies continue. Conway Feed has picked up some of EPL’s customers, but the smaller company cannot really continue to fill the orders on a long-term basis. And getting EPL’s operations back up and running has proved more complicated than the electronics shipment that arrived by air from California.

Truck drivers who normally could deliver a wheat product to the company from Canada in 90 minutes now must spend nine hours threading their way along the still-flooded roads. How long it will take to get parts to repair trucks and equipment damaged by the flood is anybody’s guess.

That’s on top of the supply chain problems that already were plaguing the industry, even before the latest flooding.

“Three or four years ago, I could get a bid on something and we could order parts and they’d be here in four to six weeks,” Mr. Hoekstra said. Now if you can find somebody that gets you what you need, it might take four months.”

Animal illnesses from stress, food shortages or from hours standing in ice-cold water are likely to emerge in the coming weeks or months, Dr. Itle said. The stresses are not over, she warned farmers in a recent advisory — not for their animals, and not for them.

“Animal caretakers will often put aside their own essential needs (food, water and sleep) to care for their animals during an emergency,” she wrote. “You won’t be able to care for animals if you don’t take care of yourself first.”