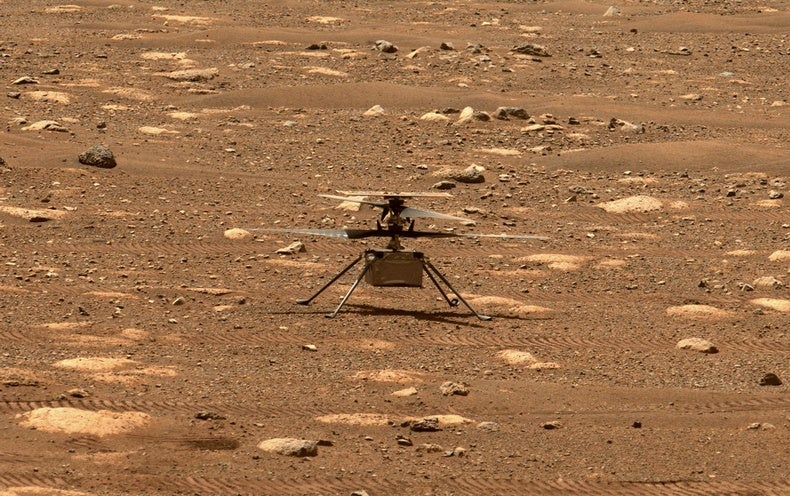 We’ll have to wait a bit longer to see the first Mars helicopter lift off.

NASA had originally aimed to conduct the first Red Planet flight of its Ingenuity helicopter—the first-ever powered flight on a world beyond Earth—on Sunday (April 11). A high-speed rotor-spinning test on Friday (April 9) didn’t go as planned, however, pushing the debut back until Wednesday (April 14) at the earliest.

Now, after analyzing the issue over the weekend, the Ingenuity team has concluded “that minor modification and reinstallation of Ingenuity’s flight control software is the most robust path forward,” officials at NASA’s Jet Propulsion Laboratory (JPL) in Southern California, which manages Ingenuity’s technology-demonstrating mission, wrote in an update Monday (April 12).

“Our best estimate of a targeted flight date is fluid right now, but we are working toward achieving these milestones and will set a flight date next week,” NASA officials wrote in the update.

Validating the software change and beaming it to the 4-lb. (1.8 kilograms) chopper, via NASA’s Perseverance rover, will take some time, the officials added. A detailed timeline is still being worked out, and the team plans to set a new flight date next week.

“We are confident in the team’s ability to work through this challenge and prepare for Ingenuity’s historic first controlled, powered flight on another planet,” officials wrote. Ingenuity remains healthy and stable, and its vital systems such as power and communications are working properly, they added.

Perseverance and Ingenuity landed together inside Mars’ 28-mile-wide (45 kilometers) Jezero Crater on Feb. 18. On April 3, the solar-powered helicopter deployed from the rover’s belly and began soaking up the Martian sun for the first time.

After powering up, Ingenuity began going through a series of preflight checkouts. The chopper sailed through all of these tests except the final one—Friday’s spinup, which aimed to get Ingenuity’s two rotors up to 2,400 revolutions per minute, the same rotational speed they’ll reach during flight.

But during the test, “the command sequence controlling the test ended early due to a ‘watchdog’ timer expiration,” NASA officials wrote in a statement on Saturday (April 10). “This occurred as it was trying to transition the flight computer from ‘Pre-Flight’ to ‘Flight’ mode.”

Ingenuity carries two cameras but no scientific instruments. Its main task is to show that powered flight on Mars is possible, potentially opening up a new mode of exploration on the Red Planet. If Ingenuity’s month-long flight campaign is successful, future Mars missions could commonly include helicopters as scouts for rovers or as data gatherers in their own right, NASA officials have said.

Perseverance is supporting Ingenuity’s test campaign—the mission team must route communications to and from the helicopter through the rover—and will attempt to capture high-resolution imagery of its flights as well.

While the helicopter team works out Ingenuity’s issues, JPL officials said, Perseverance will continue studying nearby rock targets and prepare for a test of another technology demonstration—the Mars Oxygen In Situ Resource Utilization Experiment (MOXIE), an instrument on the rover designed to generate oxygen from the carbon dioxide-dominated Martian atmosphere.

Once Ingenuity has finished its flights, Perseverance will focus fully on its own mission, which has two main goals: searching for evidence of ancient life on the floor of Jezero Crater, which hosted a lake and a river delta long ago, and collecting dozens of samples for future return to Earth.