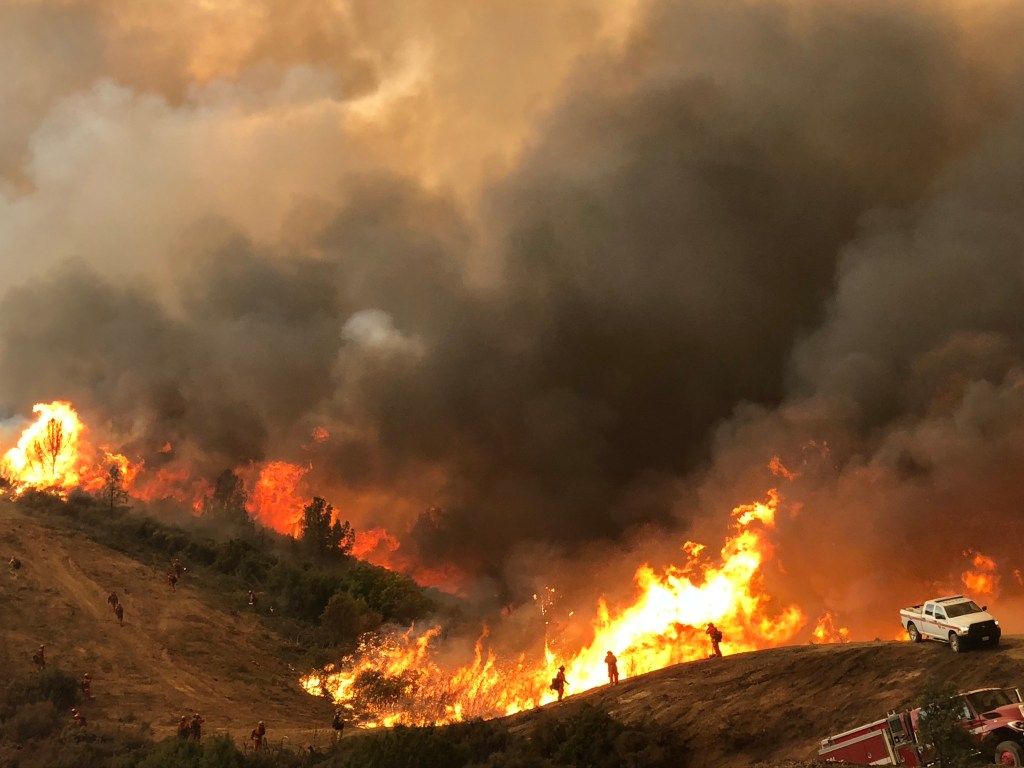 UPDATED with latest: After a week of very little progress, firefighters gained real ground on Tuesday night against what has become the third-largest fire ever recorded in Los Angeles.

The Bobcat Fire moderated overnight allowing crews to complete defensive firing operations from Highway 2 to Mt. Wilson, creating a new containment line. Most of the activity was in the Mt. Waterman area where uphill runs and flanking were observed.

From this morning’s Angeles National Forest update: “A significant portion of the fireline in the Antelope Valley was classified as contained as a result of the work that has been done in this area and crews continued to secure areas around structures. Indirect fireline has been completed for the northwestern edge of the fire.”

As a result the fire, which was 17% contained on Tuesday night, was 38% contained by Wednesday morning. The accomplishment is all the more remarkable given that, in the previous week, containment varied very little — between 13 and 17%. The blaze only grew 1,000 acres overnight, to 113,000 acres.

#Firefighters are working hard on the #BobcatFire to get containment, this morning we are up to 38% containment and 113,307 acres. Last night crews completed the strategic firing operation north from Mt. Wilson to Hwy 2 and then east to the fire perimeter. pic.twitter.com/gKUsDLHCzU

Still, the Bobcat Fire remains a massive blaze. It is now threatening structures on the north side as it continues to spread in the foothill communities of Juniper Hills, Valyermo and towards Big Pine, where is has already destroyed some homes. The communities of Littlerock and Wrightwood “will be impacted soon,” says the ANF morning update.

In the east, the fire continues to threaten containment lines and threatens the Hwy 39 corridor. Unlike Tuesday night, “very poor humidity recovery, especially in higher elevation, and warm overnight temperatures will allow the fire to burn actively through the night,” the Wednesday update says. And there is still a heat wave forecast to hit later this week. For more on that, see below.

Fire activity to the north of Mt. Wilson Observatory is still “threatening all of the values on that peak” on Wednesday, according to the ANF statement.

Given the continued threats, ANF says that, “Containment dates are dependent on resource availability. Currently have limited resources for the fire. Critical need for resources continue.”

As a result, 100 wildland firefighters were brought in from 22 states across Mexico. They landed at the San Bernardino Airport this morning.

The @forestservice has mobilized 100 wildland firefighters from 22 states across Mexico to assist with the #CaliforniaWildfires. The press is invited to a formal presentation and welcome event, today upon their arrival to San Bernardino International Airport. #R5FireNews pic.twitter.com/c4knpOarbc

PREVIOUSLY: Tuesday marked the first day of fall and also the official start of fire season in Los Angeles. But while fall seems far way, fire season is already well underway, according to the morning update.

As of 8 p.m., the Bobcat Fire had scorched over 112,000 acres of the Angeles National Forest and was just 17% contained. That containment number has barely moved over the past week as the fire moved into the communities of Cima Mesa, Juniper Hills, Pearblossom and Devil’s Punchbowl in the Antelope Valley and San Gabriel Valley foothills. It has destroyed or damaged 29 structures, with authorities fearing the number could rise to 85. The blaze is already the third-largest ever recorded in Los Angeles.

Cal Fire’s forecast for Tuesday night and Wednesday is for “warmer and drier” conditions through Friday. “On Saturday,” said the most recent report, “a significant warming and drying trend will begin, with the possibility of gusty northeast winds.” That could mean Santa Anas.

Another warm-up is expected this weekend into early next week as a strong upper ridge builds into the region. There is the potential for a late season heat event early next week, with weak offshore — Santa Ana — flow over the mountains. Early estimates show valley highs in the lower 100s for Monday and Tuesday.

The National Weather Service says that Sunday is the anniversary of the all-time Downtown L.A. high of 113. While that mark is unlikely to be broken, the all-time high for Monday is only a few degrees lower so Tuesday, which promises to be warmer, could potentially see record highs.

That is not good news for firefighters or for residents whose homes abut the current fire boundaries. The Bobcat Fire is not projected to be out until October 30. Given that, and the remarkable heat expected in the coming days, significant fire growth is likely.

Until then, fire crews are seeking to prepare. The Mt. Wilson Observatory, which has been threatened twice in the past week, will be the scene of backfires throughout the night as crews seek to cement their gains.

That area is home not only one of the crown jewels of astronomy, but also to infrastructure that transmits cellphone and television signals and radio broadcasts for the greater Los Angeles Area.

Aerial Ignitions as part of this strategic firing operations will start at 5PM. Residents in the area might see smoke coming from Mt. Wilson area.