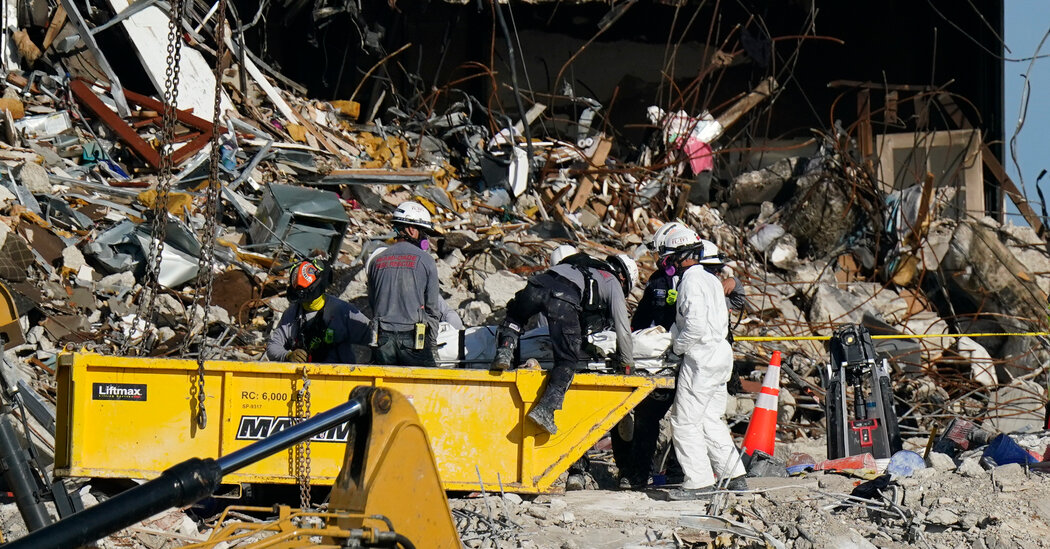 Rescue crews found the body of the 7-year-old daughter of a Miami firefighter while searching the wreckage of Champlain Towers South, officials said on Friday, when the known death toll rose, by four, to 22. As many as 126 people remain unaccounted for.

The discovery of the girl, whom authorities declined to name, was especially painful for rescue crews, many of whom have labored for more than a week in Surfside, Fla., without finding any survivors since the day of the collapse.

“Every victim we remove, it’s difficult,” said Chief Alan Cominsky of Miami-Dade Fire Rescue. “Last night was even more, when we were removing a fellow firefighter’s daughter.” He added: “As firefighters, we do what we do. It’s kind of a calling. And we always say that. But it still takes a toll.”

Elad Edri, the deputy commander of an Israeli team working at the site, said police officers and firefighters formed two columns to flank the girl’s removal from the debris. Mr. Edri said that once she had been taken away, the rescuers embraced and wept.

The three other victims found on Friday were Bonnie Epstein, 56, and the married couple Maria Obias-Bonnefoy, 69, and Claudio Bonnefoy, 85.

Mr. Bonnefoy’s daughter Pascale Bonnefoy, who contributes to The New York Times from Chile, said she was relieved to receive the news because she had been worried that Hurricane Elsa would topple the remaining structure and delay the recovery for months.

“They were found together around the bedroom area,” she said. “They said most everyone they found were found near their bedroom areas, which means, fortunately, people didn’t really have time to react and make a frantic run for the hallway or the elevator.”