Fire forces evacuation of 100s of homes in Florida Panhandle 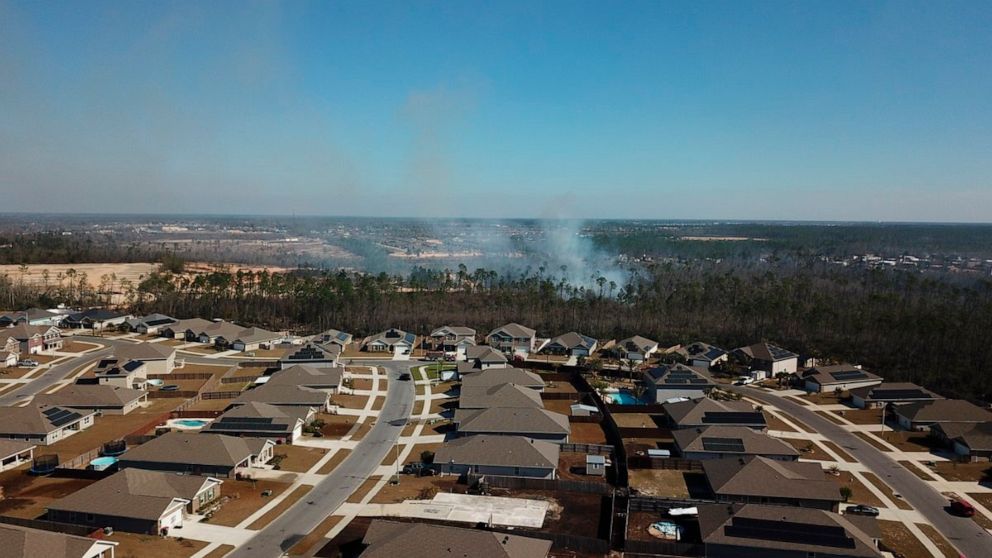 Residents of hundreds of homes in the Florida Panhandle have been evacuated as a wildfire destroyed two houses and damaged 12 others, in an area that has spent the past three years recovering from the devastation of Hurricane Michael

PANAMA CITY, Fla. — Residents of hundreds of Florida Panhandle homes were evacuated as a wildfire destroyed two houses and damaged 12 others in an area that has spent years recovering from the devastation of Hurricane Michael, officials said Saturday.

Hundreds of thousands of acres (hectares) of downed trees from the 2018 hurricane, along with low humidity and strong winds, have created “the perfect storm” for hazardous fire conditions in Bay County, Florida, Gov. Ron DeSantis said at a news conference in Panama City.

“This is not a surprise,” DeSantis said.

More than 200 firefighters and emergency workers from around the Panhandle worked overnight to strengthen containment lines and protect homes. As of Saturday morning, the 1,500-acre (607 hectare) Adkins Avenue Fire was 30% contained, according to the Florida Forest Service.

The agency has deployed more than a dozen tractor plow units as well as multiple helicopters, and burn bans were in effect in parts of the region, officials said in a news release.

At least 600 homes had been evacuated as of Saturday morning, but that figure was expected to grow as new neighborhoods were placed under evacuation orders throughout the day.

“This is a really significant, fast-moving fire,” DeSantis said.

Michael was the first Category 5 hurricane to make landfall in the U.S. since Hurricane Andrew in 1992, and only the fourth on record, when it tore through Mexico Beach and Tyndall Air Force Base in October 2018. The hurricane was directly responsible for 16 deaths and about $25 billion in damage in the U.S., according to the National Oceanic and Atmospheric Administration.

It also left behind 2.8 million acres (about 1.1 million hectares) of shredded and uprooted trees in the Florida Panhandle, Florida Commissioner of Agriculture Nikki Fried said at the news conference.

“Hurricane Michael left an additional threat to our communities — wildfires,” Fried said. “Wildfires are never easy control. This added fuel and dense pockets of vegetation from Hurricane Michael will increase the intensity of wildfires.”

Officials with the Florida Forest Service said there was no timeline for when residents would be allowed to return to their homes. At the news conference, Florida Chief Financial Officer Jimmy Patronis recommended that evacuated homeowners contact their insurance companies since it will speed up the claims process should their homes be damaged or destroyed.

“Have patience as we ask you to evacuate from your homes,” Patronis said.

Dry conditions in Florida have created elevated fire dangers, with 148 active wildfires burning across the state, including the 3,000–acre (1,214-hectare) Bertha Swamp Fire in neighboring Gulf County, according to the Florida Forest Service.