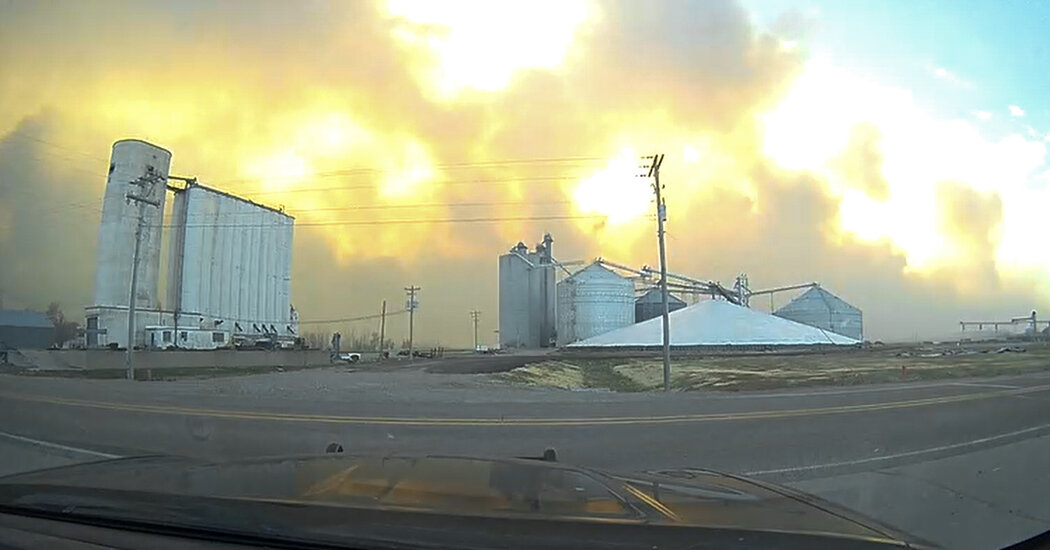 A fire chief in Nebraska was killed while responding to a wildfire that has burned nearly 30,000 acres in the south-central part of the state, destroying farms and prompting evacuations, officials said.

The chief, Darren Krull of the Elwood Volunteer Fire Department, died on Thursday when the S.U.V. he was traveling in crashed into a water truck in “zero-visibility conditions” created by the smoke, the Nebraska State Patrol said in a statement.

Mr. Krull, 54, was in the passenger seat of a Ford Expedition driven by Justin Norris, the Phelps County emergency manager. Mr. Norris, 40, was in stable condition at a hospital in Omaha on Friday. The water truck driver, Andries Van Aswegan, 28, was also responding to the fire and was not injured in the crash.

The fire in Gosper and Furnas Counties was 30 percent contained on Saturday morning, according to Alyssa Sanders, coordinator for the State Emergency Response Commission.

About 40 fire departments in the state and the Nebraska National Guard were responding to the fire, which destroyed eight houses and 48 outbuildings as it blazed across the rural area. Gov. Pete Ricketts issued an emergency declaration on Friday to make state resources available to aid in the fire response.

The National Weather Service warned that a significant portion of Nebraska would remain at critical risk of wildfires on Saturday because of the dry conditions and high winds.

The fire began on Thursday around noon near Elwood, in Gosper County, after strong winds blew a dead tree into a power line, according to Nebraska State Fire Marshal investigators.

The fire spread quickly, propelled by 60 to 70 mile an hour wind gusts and incredibly dry conditions, said Aaron Mangels, a lead meteorologist at the Weather Service office in Hastings, Neb.

Mr. Mangels said it was normal for wildfires to happen in Nebraska at this time of year, but that this one was unusually large. “Early estimates were around 30,000 acres, which is quite large for anywhere, let alone Nebraska,” Mr. Mangels said.

The smoke and falling ash from the fire created dangerous driving conditions on Thursday and Friday morning.

Also on Thursday, Edison, a village in Furnas County where about 150 people live, was under an evacuation order. The order was lifted on Friday afternoon.

The Weather Service said that a fire warning was in effect for several counties in south-central Nebraska and north-central Kansas through Saturday night because of strong winds and low relative humidity. Mr. Mangels said people should avoid burning anything outdoors and be cautious while doing activities that could ignite a fire, such as agricultural work and smoking cigarettes.

Winds had calmed to 30 m.p.h. gusts on Friday and Saturday, but they still posed a fire risk in the dry area, which has received only 20 to 40 percent of its normal amount of precipitation over the past 90 days, Mr. Mangels said.

Nearly 60 percent of Nebraska, including Gosper and Furnas Counties, is in a severe drought according to the U.S. Drought Monitor, a collaboration of several federal agencies and the University of Nebraska-Lincoln.

Global warming increases the likelihood of drought, and the United Nations warned in February that the risk of devastating wildfires would surge as climate change further intensifies.

The U.N. report, which was produced by more than 50 researchers from six continents, said that the risk of highly devastating fires could increase by up to 57 percent by the end of the century, primarily because of climate change.

The report found that in some areas, including the Western United States, fires have become more intense over the last decade and have ravaged larger areas.