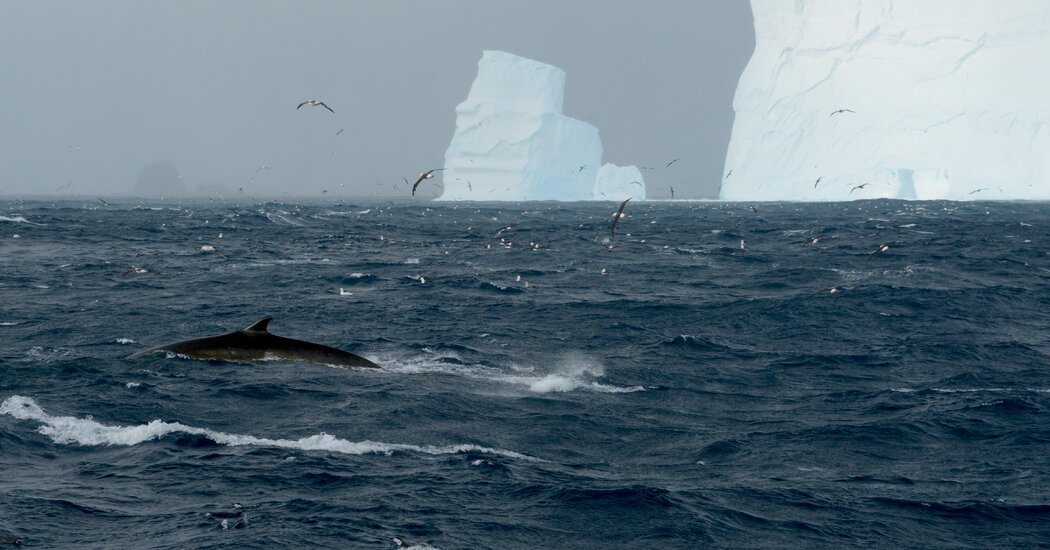 From a distance, it looked like thick fog across the horizon. But as the ship drew closer, the ocean bubbled as 150 fin whales, the planet’s second-largest creatures, dived and lunged against the water’s surface.

Six weeks into a nine-week expedition, near the coast of Elephant Island, northeast of the Antarctic Peninsula, researchers had stumbled upon the largest gathering of fin whales ever documented.

“It was one of the most spectacular observations I’ve had,” said Helena Herr, a marine mammal ecologist at the University of Hamburg. “The fin whales seemed to go crazy because of the food load they were confronted with. It was absolutely thrilling.”

Dr. Herr and her colleagues documented the return of large numbers of fin whales to the waters that once made up their historic feeding grounds in a paper published on Thursday in the journal Scientific Reports. The research provides a glimmer of good news in what is otherwise a worrisome landscape for global biodiversity, and species of ocean dwellers in particular.

Humans are speeding extinction at an unprecedented pace, according to assessments by the United Nations. In the oceans, recent modeling has estimated that global warming caused by continued greenhouse gas emissions could trigger a mass die-off of marine species by 2300.

The rebounding of the fin whales’ population, however, offers “a sign that if you enforce management and conservation, there are chances for species to recover,” Dr. Herr said.

For much of the 20th century, the scene in the waters around Antarctica were markedly different. Between 1904 and 1976, commercial whalers descended on the rich feeding grounds and killed an estimated 725,000 fin whales in the Southern Ocean, depleting their population to as little as 1 percent of its pre-whaling size.

When parties to the International Whaling Commission ultimately voted to ban whaling in 1982, after a decade-long campaign by environmental groups to save the whales, a number of species — including fin, sperm and sei whales — had already been hunted to near-extinction.

But 40 years after the commercial whaling ban, researchers studying other species in the Southern Ocean began to notice that increasing numbers of fin whales had returned.

This was the case in 2013 for Dr. Herr and her colleagues. At the time, they were investigating Minke whales when they came across large congregations of fin whales “by coincidence.” They decided to apply for funding to study the fin whales’ revival.

In 2018 and 2019, the researchers returned to the Antarctic Peninsula for the first dedicated study of the fin whale population. Through aerial surveys, researchers recorded 100 groups of fin whales, ranging in size from one to four individuals. They also documented eight large groups of up to 150 whales that had gathered to feed.

South Asia. India and other nations in the region, home to hundreds of millions of humanity’s most vulnerable, are on the front lines of climate change. As climatic extremes become the norm, it’s growing more difficult to address poverty, food security and health challenges.

Great Salt Lake. Local politicians and scientists are warning that climate change and rapid population growth are shrinking the lake, creating a bowl of toxic dust that could poison the air around Salt Lake City. But there are no easy solutions to avert that outcome.

The survey “confirms that this pattern is still going on and is emerging even stronger,” said Jarrod Santora, a fisheries biologist with the National Oceanic and Atmospheric Administration who was among the first researchers to document increasing fin whale populations while studying krill. (He was not involved in this new research.)

Whale researchers cautioned that not all species of whales have rebounded as successfully since the whaling ban. Sally Mizroch, a fisheries biologist who has studied whales since 1979 and was not involved in the research, described fin whales as “very successful.” Unlike other species, such as blue whales, fin whales can forage over large distances and feed on a variety of food sources.

Scientists are not sure why some of the gatherings were so large. Dr. Herr noted that the scenes they witnessed had at least some parallels to historical reports written before widespread commercial whaling. For instance, the naturalist William Speirs Bruce described seeing whales’ backs and blasts stretching “from horizon to horizon” on an Antarctic expedition in 1892.

Recent research has proposed that the rebound in whale populations is good not only for the whales but also for the entire ecosystem, through a concept known as the “whale pump.” Scientists posit that as whales feed on krill, they excrete iron, which was locked in the crustaceans, back into the water. That, in turn, can boost phytoplankton, microscopic organisms that use carbon dioxide in photosynthesis and serve as the base of the marine food chain.

As the fin whales bring the krill to the water’s surface, they can also facilitate the success of other predators, including seabirds, and seals, Dr. Santora said. “There’s much more cooperation and symbiosis than we usually give the ecosystem credit for.”