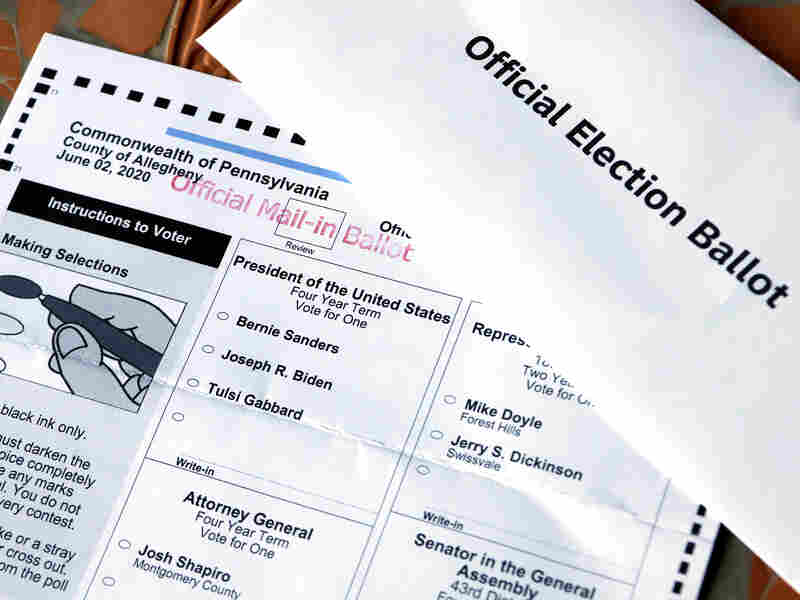 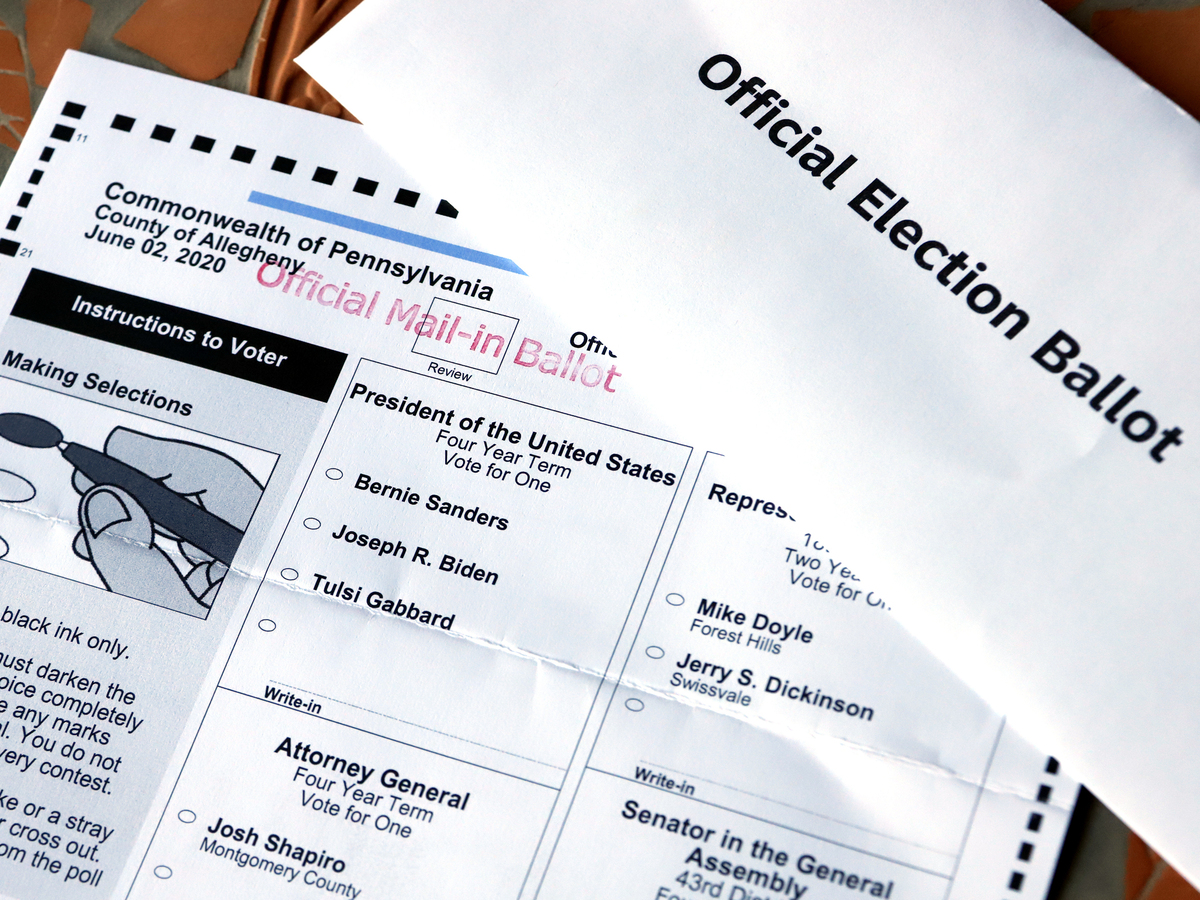 This May 26 photo shows an official Democratic primary mail-in ballot and secrecy envelope for the Pennsylvania primary in Pittsburgh.

The FBI and the U.S. attorney for the Middle District of Pennsylvania said they are investigating “potential issues with a small number of mail-in ballots at the Luzerne County Board of Elections,” according to a statement Thursday.

Authorities said that they had recovered nine military ballots that had been discarded and that seven of the ballots had been cast for President Trump. Two ballots had been resealed in envelopes and are in the custody of federal investigators.

Pennsylvania State Police and the FBI have been working to get answers and have been conducting interviews, the statement said.

The potential voting irregularities in Pennsylvania came to light after Trump mentioned them, offhand, in an interview with a Fox radio host Thursday.

“We have to be very careful with the ballots,” the president told reporters later, according to a news pool report. He described what he called a “scam” where ballots had been found in the trash. The president has been criticizing the integrity of this year’s election for months.

“We want to make sure the election is honest, and I’m not sure that it can be,” Trump continued.

Luzerne County Elections Director Shelby Watchilla discovered the ballots described as “discarded” last week, officials said in a separate announcement. There were no additional details, but the county’s statement said the matter was immediately reported to authorities.

Luzerne County District Attorney Stefanie Salavantis then asked U.S. Attorney David J. Freed to investigate, according to the Justice Department’s statement. That led to the involvement of the FBI.

County workers opened the ballots “improperly,” which is how authorities know for whom they were cast, a spokesperson for the U.S. attorney’s office told reporter Emily Previti of NPR member station WITF in Harrisburg, Pa.

Why did the office announce that and, more broadly, the existence of an ongoing investigation — which the Justice Department typically does not address unless it leads to charges? The U.S. attorney’s office said it had no further comment.

Salavantis leads a working group on the Presidential Commission on Law Enforcement and the Administration of Justice, which is spearheaded by Attorney General Bill Barr.

Justin Levitt, a law professor at Loyola Law School in Los Angeles, said the timing of the announcement alone raises many questions.

On the other hand, Levitt said, it would not be improper to investigate if local officials were refusing to set aside and count valid ballots. But it’s not clear that’s what happened, he added.

Levitt said the Trump Justice Department had issued guidance in 2017 requiring that “any criminal investigation by the department must be conducted in a way that minimizes the likelihood that the investigation itself may become a factor in the election.”

Matt Wolking, who handles rapid-response communications for the Trump campaign, highlighted the probe and concluded, “Democrats are trying to steal the election.”

BREAKING: FBI finds military mail-in ballots discarded in Pennsylvania. 100% of them were cast for President Trump.

Democrats are trying to steal the election. https://t.co/Sx9nbqBScr

The Pennsylvania county where authorities said they are investigating the ballots supported Trump in the 2016 election.

Matthew Miller, a former press spokesman for President Barack Obama’s Justice Department, said in a tweet that the U.S. attorney’s news release amounted to an “in kind contribution” to the Trump reelection campaign since it amplified the president’s allegations about the dangers of mail-in voting during the coronavirus pandemic.

This is an ongoing investigation where there is no public interest reason to override the usual policy of not commenting – and especially not to say for whom the ballots were cast. An unprecedented in kind contribution to the president’s campaign. https://t.co/Tqy2hSlBba

Because the U.S. attorney’s office offered so few details about the situation in Luzerne County, Thornburgh said he’s concerned voters might conclude the situation is much worse than it actually is and wrongly conclude there could be wider problems, based on an anecdotal example.

“You have to be on the lookout for breakdowns in the system, but we have to be careful not to extrapolate from single-digit incidents to more systemic problems,” he said.