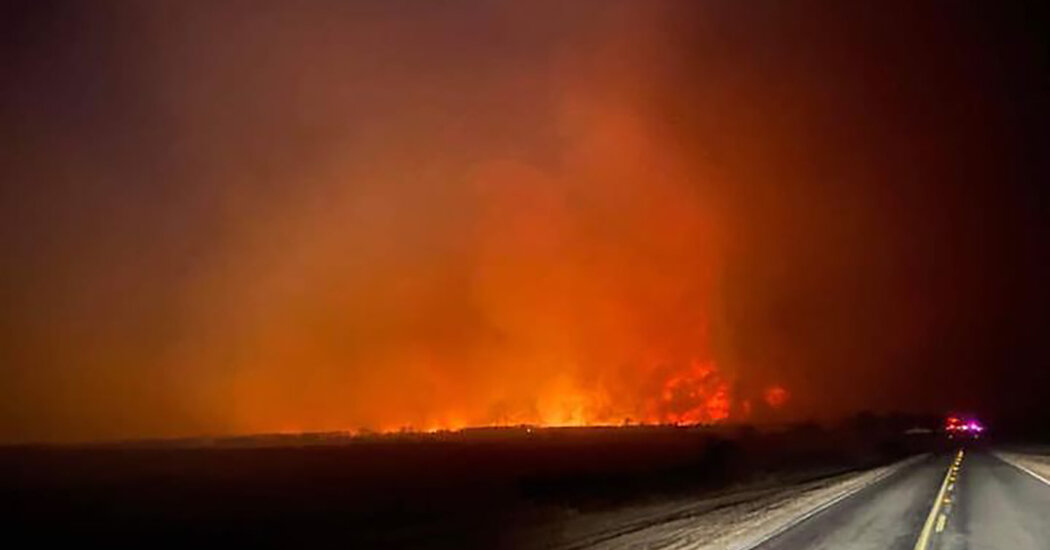 At least one person was killed, 50 homes were destroyed and nearly 500 others evacuated in central Texas after a wildfire burned more than 45,000 acres, officials said on Friday.

The wildfire, a set of blazes west of the Dallas-Fort Worth area called the Eastland Complex fire, began on Thursday evening. A deputy with the Eastland County Sheriff’s Office, Barbara Fenley, died while helping people escape, the authorities said.

The blaze was 15 percent contained as of Friday evening, the Texas A&M Forest Service said on Twitter. Firefighting crews had been protecting structures and building fire-containment lines, and planes dropped water and fire-retardant chemicals in the area, it said.

Gov. Greg Abbott signed a disaster declaration on Friday that would allow the state to better help 11 counties affected by the fire. He said more counties could be added.

The forest service said on Friday that it was responding to 10 wildfires across the state that had burned more than 52,000 acres, adding that strong winds and dry grasses were contributing factors.

The National Weather Service office in Fort Worth said on Friday evening that it expected elevated fire danger in several countries west of the city over the weekend.

Madison Gordon, a meteorologist with the National Weather Service, said that the Eastland Complex blaze was the first wildfire of such a magnitude to hit Texas this year.

“This is definitely one to pay attention to,” he said.

The Eastland Complex fire consists of four blazes that have scorched parts of Comanche and Eastland Counties. The largest of them, the Kidd fire, had burned at least 30,000 acres as of Friday.

Communities affected included Gorman, where roughly 475 homes were evacuated; Carbon, where a highway was closed; and Lake Leon. Gorman is about 100 miles west of Fort Worth. Shelters for evacuees were opened at sites that included churches and a school.

Residents shared footage of the fire on social media, including scenes of damaged homes. Smoke from the blaze was reaching other parts of the state, including Houston, about 300 miles away, the National Weather Service said.

The Houston Health Department told residents, especially those with respiratory issues, to stay indoors on Friday.

Smoke from the fire can lead to health problems, including burning eyes and chronic heart and lung disease, according to the Environmental Protection Agency.