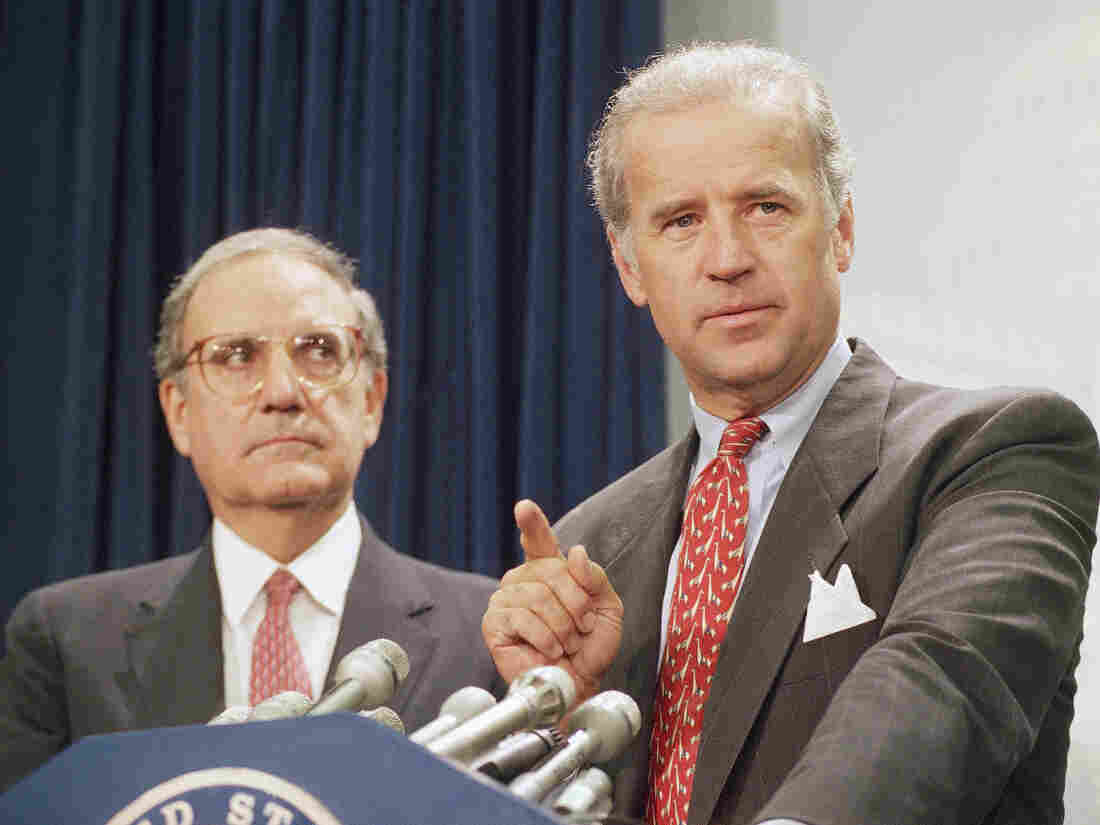 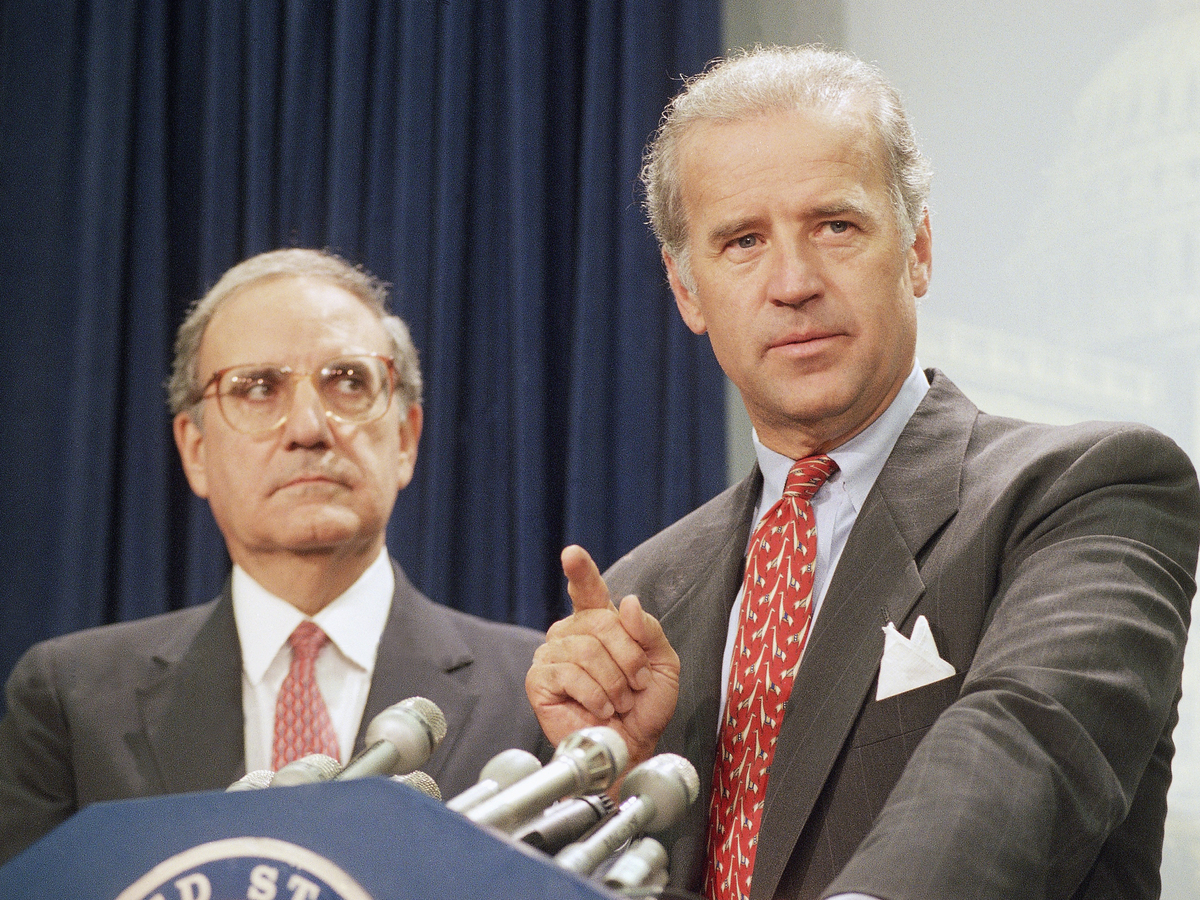 Then-Sen. Joe Biden, right, at Capitol Hill news conference in 1994 after the Senate voted on a major crime bill.

For four nights, speakers at the Republican National Convention pilloried Democrat Joe Biden over his alleged weakness on crime and painted a dystopian future if he were to be elected in November.

Biden and Democrats were “completely silent about the rioters and criminals spreading mayhem in Democrat-run cities,” during their convention, Trump charged Thursday. The previous evening, Vice President Pence warned, “The hard truth is you will not be safe in Joe Biden’s America.”

The speeches came as residents of Kenosha, Wis., were reeling from the shooting by police of Jacob Blake, a 29-year-old Black man, and the resulting protests — during which two people were fatally shot. The unrest follows turmoil in other cities after police killed George Floyd, also a Black man, in Minneapolis in May.

Pence claimed that Biden would “double down in the very policies that are leading to violence in American cites,” to which Biden responded with a reminder that “right now … we’re in Donald Trump’s America.”

Statistics show that some crime has been increasing in cities, with mayors who are Democrats and Republicans. According to figures complied by data analyst and consultant Jeff Asher, the murder rate has increased by 26% through July compared to a year ago. Other violent crimes are up slightly, while property crimes are down by 7.7%.

Murder remains up big (+26%) while violent crime is roughly even and property crime remains solidly down relative to each city’s YTD 2019 total. pic.twitter.com/yh8xhAwWFC

This is a reversal of longer term trends, in which violent crimes have been generally declining since the ’90s. In an email, Asher says determining the cause for the increase this year is complicated.

“We barely have the data to recognize that a new trend is occurring, much less to be able to properly evaluate and diagnose its cause,” he says. But the “intense stresses being placed on numerous aspects of society by the pandemic is as persuasive as any.” 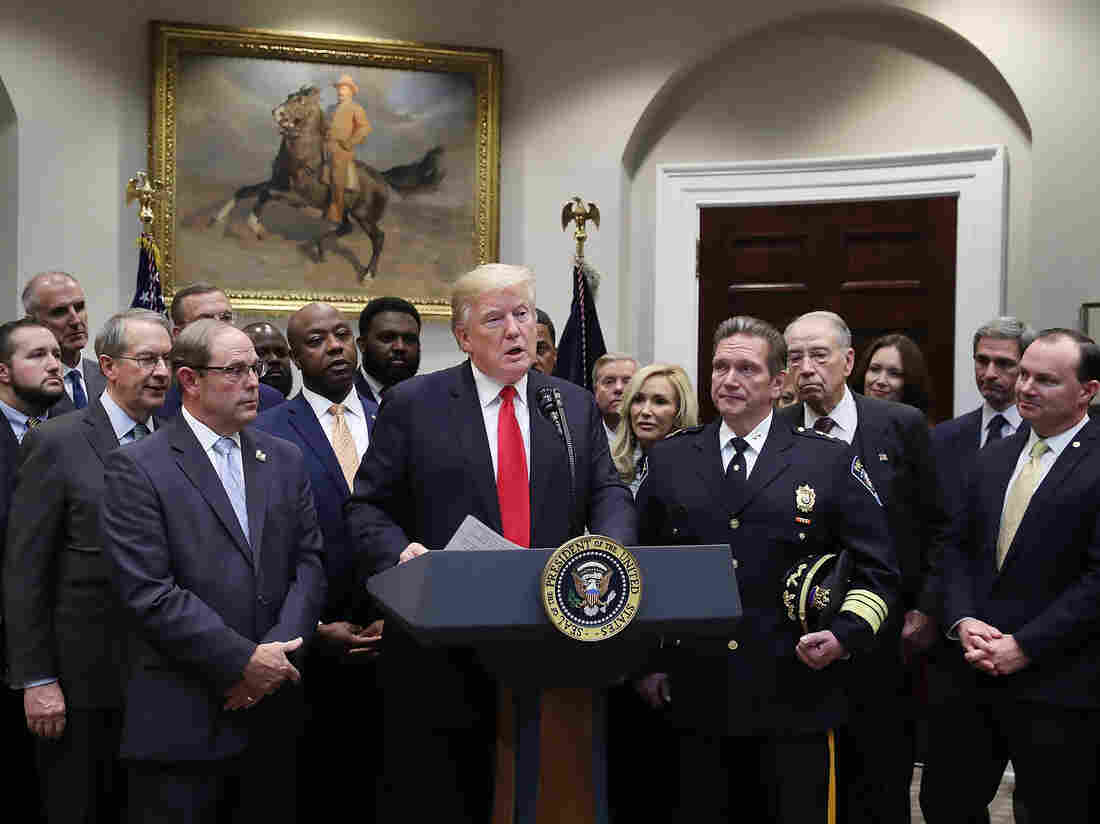 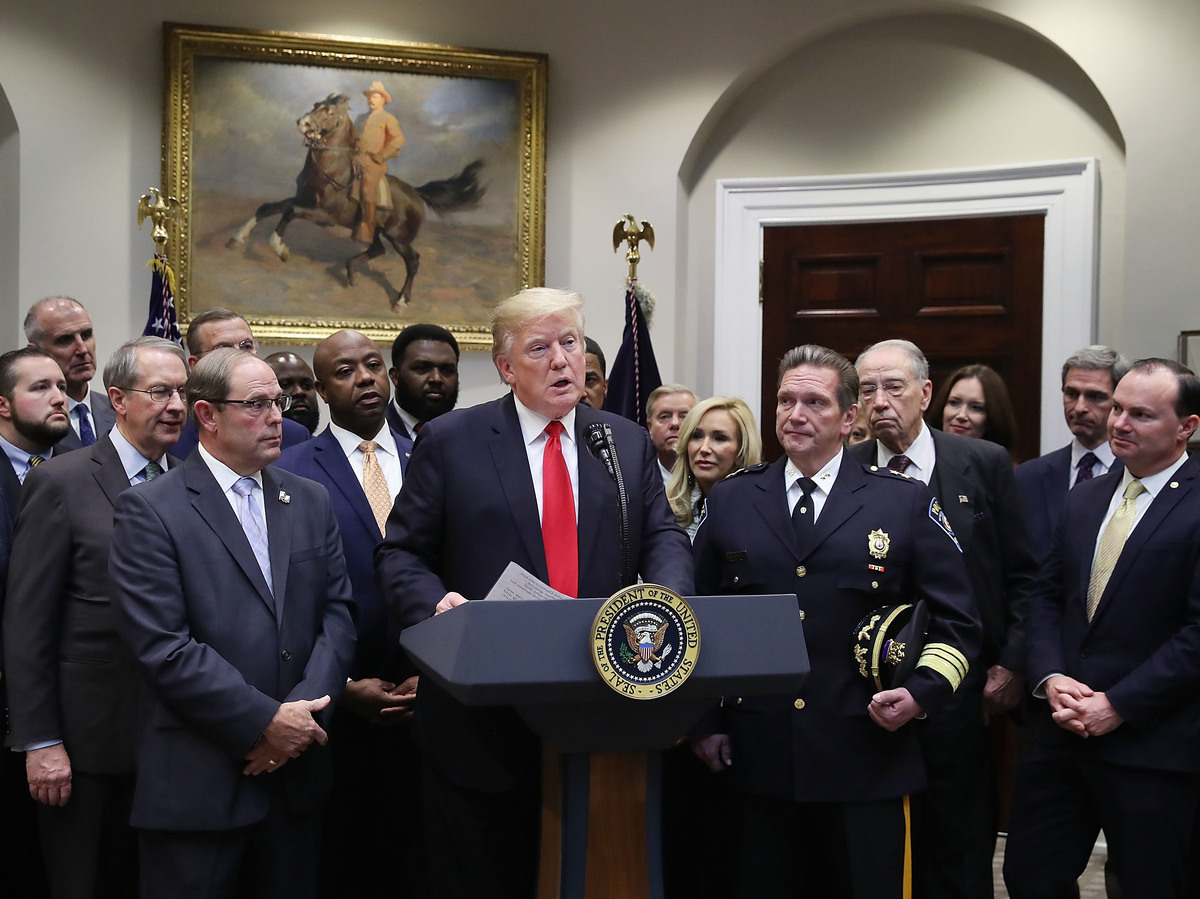 President Trump speaks about the First Step Act prison reform bill at the White House in 2018.

The Trump administration announced this summer it was sending federal resources to cities, including additional FBI agents, along with U.S. Marshals and agents from the DEA and the Bureau of Alcohol, Tobacco and Firearms to — in the Justice Department’s words — “fight the sudden surge of violent crime.”

But Trump, who promised in his 2016 acceptance speech that “the crime and violence that today afflicts our nation will soon, and I mean very soon, come to an end” has a spotty record when it comes to criminal justice reform.

His signature achievement on the issue, the widely touted First Step Act signed in 2018 and passed with bipartisan support in Congress, instituted sentencing reforms, including reducing harsh penalties for crack cocaine possession. And on Friday, Trump pardoned Alice Johnson, a criminal justice reform advocate who delivered a powerful address at the Republican National Convention this week, and whose cause had been espoused by Kim Kardashian West. But some parts of the law have fallen short, activists say.

In June, following the unrest after George Floyd’s killing, Trump signed an executive order that would provide federal grants to improve police training, and create a national data base of police misconduct complaints. But it fell well short of what activists say is needed. Congress was unable to reconcile police reform proposals earlier this summer.

As Republicans were fond of noting during their convention, Joe Biden has a 47-year record as a U.S. senator and then vice president. During much of his Senate career, he was a member of and chairman of the Judiciary Committee, and in 1994 sponsored the Violent Crime Control and Law Enforcement Act.

It came in a different era, as Democrats set out to prove that they, too, were “tough on crime.” The bill included a 10-year ban on assault-style weapons as well as the Violence Against Women Act, which Biden points to today as a signal of his commitment to ending domestic violence.

But the act also included harsh penalties for drug-related crimes and money to construct new prisons, which critics said led to the mass incarceration of Black men. It also included funding to hire 100,000 additional police officers.

Now, Biden has backed away from some of the provisions in that bill, while at the same time rejecting calls by some in his party to defund police departments.

He’s proposed a ban on police choke holds, a new federal police oversight commission, new national standards for when and how police use force, more mandatory data collection from local law enforcement, and other steps.

Biden’s running mate, Sen. Kamala Harris, brings her own record on criminal justice issues to the Democratic ticket. She was San Francisco’s district attorney and then California’s attorney general before her election to the Senate.

As district attorney, she initiated a policy for first-time drug offenders to get a high school diploma and a job instead of prison.

As AG, she refused to seek he death penalty for a man who killed a police officer. She also instituted a controversial policy that threatened to prosecute parents of children who skipped school as a way to reduce truancy levels.

In the Senate, she co-sponsored with Republican Sen. Rand Paul a bail reform measure as a way of reducing the numbers of people held, arguing in a 2017 New York Times op-ed that “excessive bail disproportionately harms people from low-income communities and communities of color.”