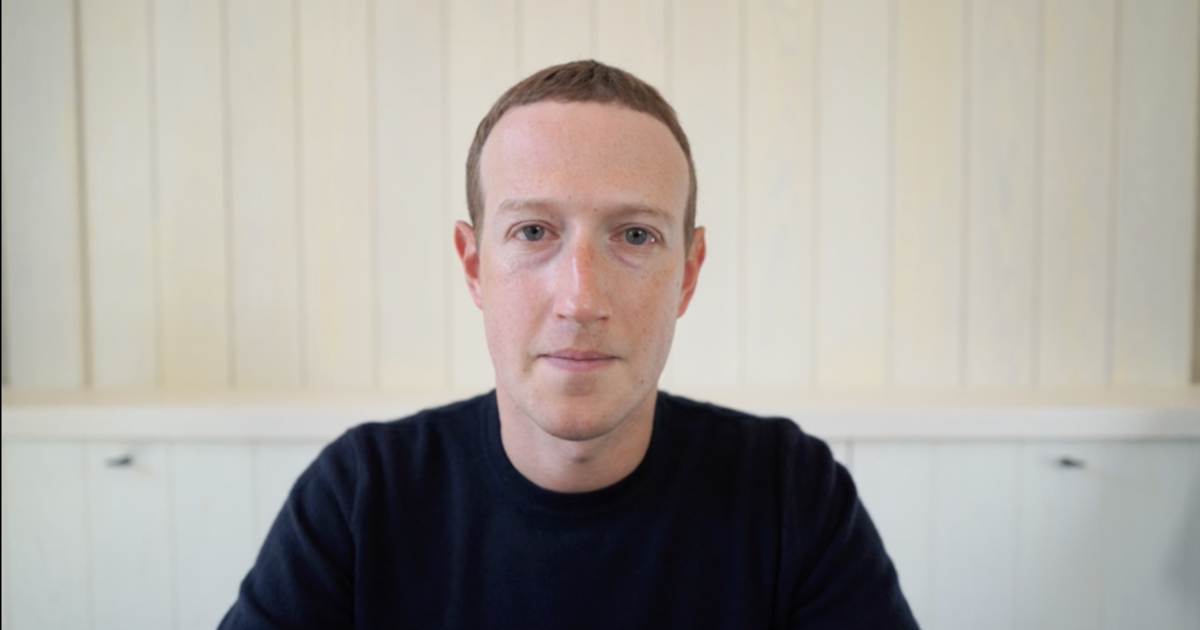 Facebook is coming out with a new set of steps to help safeguard the November election, amid reports of foreign interference and false claims about mail-in voting from President Trump and his allies.

The social media giant says it will, among other things, remove posts with “clear misinformation” about the coronavirus pandemic and voting, attaching a link to authoritative information on both instead. Facebook will also not be accepting new political ads the week before the election, and, through a partnership with Reuters, will add a label directing users to official election results in the event that a candidate tries to declare victory before final results are in.

“I think it’s important that we start preparing people now,” founder Mark Zuckerberg told “CBS This Morning” co-host Gayle King. “There’s nothing illegitimate about taking a few extra days, or even weeks, in order to make sure that all the votes get counted. In fact, it would be illegitimate if we didn’t make sure that all of the valid votes were counted.”

Zuckerberg and his wife, Dr. Priscilla Chan, are also donating $300 million in a bid to help strengthen election security. In the past, Facebook has been accused of fostering and even bolstering far-right rhetoric and allowing disinformation from foreign entities to be disseminated on the platform.

“The thing that I’m very sensitive [about] is having us be the ultimate deciders of what is right and wrong and true and false in the world,” Zuckerberg told King.

Read a portion of their conversation below:

Gayle King: Are you worried about people co-opting your platform to put information out that mail-in voting isn’t so safe?

Mark Zuckerberg: So one of the things that we’re going to be doing is, at the top of Facebook and Instagram, we’re going to be putting accurate information about how to vote by mail, and how to do it accurately… But we’re also gonna be acting on content that people try to put out there, that says that it is fraudulent… if people post content that broadly is trying to delegitimize the outcome of the election, either by saying things like, “Voting by mail will definitely lead to fraud” or you know, other things that basically undermine these democratic principles of methods of voting that we know are safe, then we’re just gonna add some context to those posts.

King: Well, one of the chief critics, as you know, of mail-in voting is the president of the United States. On your own platform, in May, he says, “There is no way, zero,” in caps, “that mail-in ballots will be anything less than substantially fraudulent.”

…In June, “Rigged 2020 election, millions of mail-in ballots will be printed by foreign countries and others. Be the scandal of our times.”

July, “The 2020 election will be rigged if mail-in voting allowed to take place.” We could go on and on… So how are you handling the president of the United States?…to let him know and let people who are using your platform that this is misinformation, is it not?

Zuckerberg: I certainly think that anyone who’s saying that the election is going to be fraudulent, I think that that’s problematic. And I think additional context needs to be added to that.

King: — of the United States. Yes.

Zuckerberg: Oh, this will definitely apply to the president — once this policy goes into place… and it will apply to everyone equally.

King: Have you personally engaged with the president, Mark, about his posts on this particular topic?

Zuckerberg: I don’t think recently. I have had certain discussions with him in the past… where I’ve told him that I thought some of the rhetoric was problematic… if I did talk to him, you know, be clear about how —  just the importance of making sure that people have confidence in the election.

…One of the things that I’m quite worried about… since it may take additional time for the votes to get counted this year, especially with mail-in voting… there’s a greater chance of civil unrest and violence after the election. some people expected there to be an answer to who won the election on election night. I don’t think we’re necessarily gonna get that… And I think it’s important that we start preparing people now… that there’s nothing illegitimate about taking a few extra days, or even weeks, in order to make sure that all the votes get counted. In fact, it would be illegitimate if we didn’t make sure that all of the valid votes were counted.

King: So what will you do, say, on election night, if one candidate says, “I won,” when all the votes aren’t in?

Zuckerberg: So we’re putting in place a policy. We have a partnership with Reuters… And if someone tries to prematurely declare victory, whether it’s in a presidential election or any of the others — before there’s a consensus on who won that election — then we’re gonna add some context and a label to that post saying, “There isn’t an official result on this election.”

And directing people to the voting information center where we’ll have the list of all the official results that have come in.

King: Do you have any concerns about campaign ads on your platform? Are you thinking about readjusting your strategy about that

Zuckerberg: Yeah… so thanks for asking about this. One of the new policies that we’re announcing is we’re going to block new political and issue ads in the last week of the campaign… I generally believe that the best antidote to bad speech is more speech…

But when there’s a vote, then if someone is kind of dumping some new information, if it’s misinformation in the last days of the election, then there may not be time for that normal kinda debate and process to play out… And that’s why I think it’s important to have extra restrictions in the last week

Zuckerberg: The thing that I’m very sensitive [about] is having us be the ultimate deciders of what is right and wrong and true and false in the world. There are a number of cases where we can rely on other authorities… around elections, we partner with local election officials…

So if someone is saying, “Hey, don’t go to this polling place because the lines are really long,” and the local election official says, “No, that’s false. It’s fine here,” then we’ll take that down. That’s voter suppression and we’ll take that down no matter who says it.

King: This week, we learned that the FBI tipped off Facebook to Russian interference on your platform. What did they point out to you that you didn’t know?

Zuckerberg: Well, over the last few years, we’ve put a lot of effort into building partnerships with the intelligence community and election commissions around the world, as well as the other tech companies. So part of the normal security apparatus now is that we share intelligence and tips with each other… Between the partnerships that we have in place, with governments and other tech companies, we were able to find and disrupt this relatively early.

King: You’re talking about what you’re doing on your platform to safeguard this election, but this is also a personal cause for you and your wife, Priscilla. You both announced that you were donating $300 million to do what exactly?

Zuckerberg: You know, there have been these recent debates about, you know, funding the U.S. Postal Service and you know, we just had a lot of conversations about, wow, is there anything that we can do to help contribute to making sure that all of the infrastructure is funded in the way that it needs to be?

King: I’ve seen you mull over these things… I’m curious about what keeps you up at night… I was thinking about the Kenosha guard that was an armed militia that you have said — you admitted that it was an operational mistake, that was using Facebook to organize… What went wrong there? You know, listen, the shooter in Kenosha was not a member of this group. But you did take it down after the incident where three people were shot and two died by this 17-year-old teenager.

Zuckerberg: We’ve spent a long time looking into this deeply… And we’ve designated him as a mass murderer and have taken down all his accounts… through our investigation, we didn’t find that there was any kind of premeditation or anything in his accounts that would have suggested that we missed some signal in advance…

Now, some people did report the group, and we made mistakes in not taking down the group when those reports came in. We did take it down. It did violate our policies. But we were slow on that… for militia groups like this… Especially ahead of this election…we’re going to need to be cracking down on this more aggressively in advance of that, to make sure that there aren’t any of these groups that could get activated after the election and contribute to civil unrest.