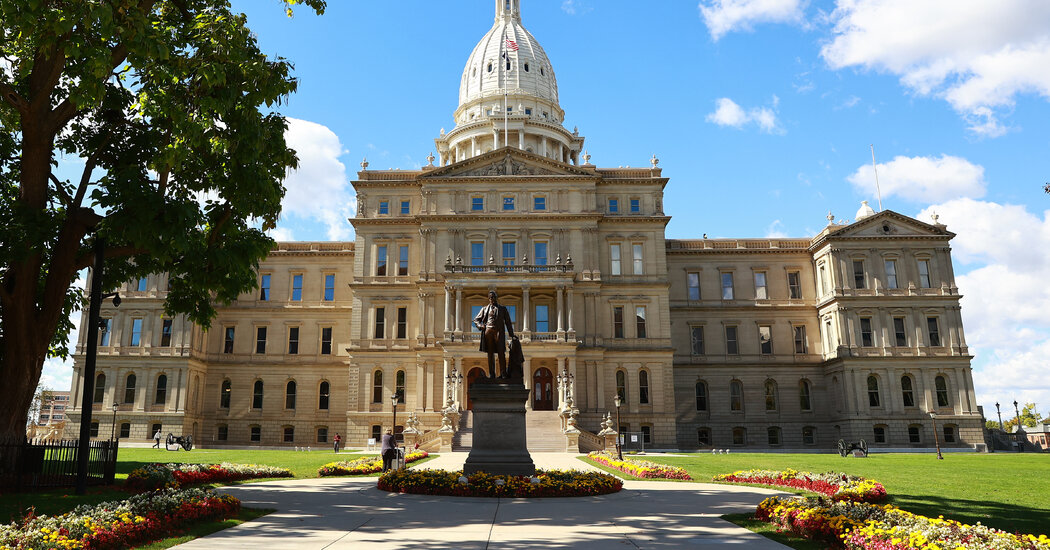 Federal and state authorities arrested two men in Michigan on Thursday who they said were members of a white supremacist group. The arrests come three weeks after more than a dozen men tied to a separate anti-government group were accused of plotting to kidnap the state’s governor.

Sherry Workman, a detective sergeant with the Michigan State Police, said the charges against two members of the Base, a white supremacist and neo-Nazi group, stemmed from their effort to intimidate a podcast host.

Sergeant Workman wrote in an affidavit that the men — Justen Watkins, 25, the group’s self-proclaimed leader, and Alfred Gorman, 35 — had posted a picture of Mr. Watkins wearing a skull mask and standing on the porch of what they thought was the podcast host’s house but was actually the home of a husband, wife and infant. The family notified the police.

The men had hoped to intimidate a host of “I Don’t Speak German,” the authorities said, which describes itself as a podcast “confronting white nationalism.”

Dana Nessel, the state’s attorney general, charged Mr. Watkins and Mr. Gorman with unlawfully posting a message intended to threaten the victims, a felony. She also charged them with two more felonies that stem from the first and can bring harsher punishments: committing a felony while in a gang and using a computer to commit a crime. The men did not immediately have lawyers listed in online court records.

According to Ms. Nessel and experts who have studied the Base, which was founded in 2018, the group urges violence against the government and trains members for a future “race war.” The F.B.I. has been investigating the neo-Nazi group and arrested several suspected members this year in Georgia and Maryland.

The arrests in Michigan come a day after it was revealed that one of the men accused of plotting to kidnap Gov. Gretchen Whitmer and storming the State Capitol also wrote on Facebook that he wanted to hang President Trump, Hillary Clinton and other politicians from both major parties, according to the F.B.I. The threats were reported by an F.B.I. agent in a new court filing in the U.S. District Court for the District of Delaware.

The agent wrote that Barry Croft, a Delaware truck driver who was one of more than a dozen men charged this month with plotting to kidnap Ms. Whitmer, a Democrat, had indicated that he wanted to hang or hold a “people’s trial” against a wide range of politicians.

“I say we hang everything currently governing us, they’re all guilty,” Mr. Croft wrote in May, according to the F.B.I.

That month, Mr. Croft also posted a photo of Mr. Trump with the message “True colors shining through,” according to the agent.

The revelations were shared in an affidavit from Kristopher M. Long, an F.B.I. agent who last week persuaded a judge to give the agency access to a Facebook account they believed Mr. Croft ran. In the affidavit, Mr. Long said that Facebook had removed Mr. Croft’s previous accounts at least twice, but that he created new ones and continued to message others about carrying out attacks as well as posting publicly about his desire that politicians die.

No lawyer is listed for Mr. Croft in court documents, and a lawyer who previously represented him declined to comment.

Mr. Long noted in the affidavit that a protest against coronavirus restrictions was scheduled around that time in South Carolina. Ms. Whitmer had also faced large protests against her coronavirus measures.

Another F.B.I. agent said in court this month that the men who planned to attack Ms. Whitmer also discussed targeting Gov. Ralph Northam of Virginia, a Democrat, over his pandemic restrictions.

Michigan, with a fervent gun culture and a big divide between rural and urban areas, is viewed by some experts as fertile ground for anti-government groups, many of which style themselves as militias.