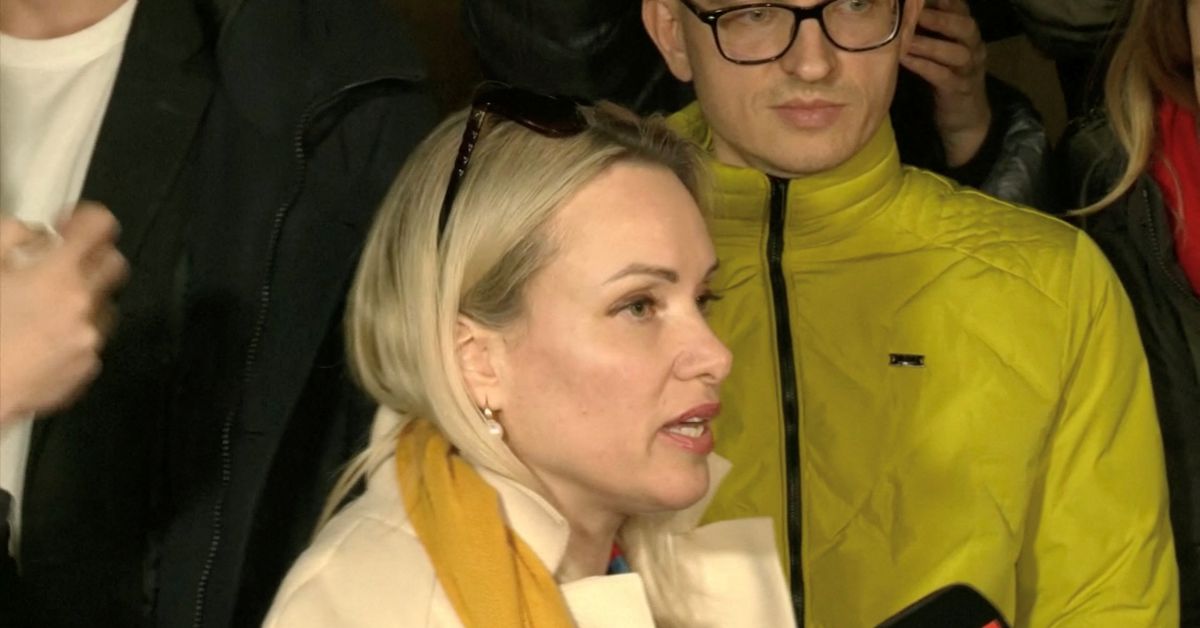 Marina Ovsyannikova, a Channel One employee who staged an on-air protest as she held up a anti-war sign behind a studio presenter, speaks to the media as the leaves the court building in Moscow, Russia March 15, 2022 in this still image taken from a video. REUTERS TV via REUTERS

LONDON, March 16 (Reuters) – A Russian woman who burst into a state TV studio to denounce the Ukraine war during a live news bulletin told Reuters on Wednesday she was worried for her safety and hoped her protest would open Russians’ eyes to propaganda.

In her first television interview since her on-air protest on Monday, Marina Ovsyannikova said the harrowing images from Ukraine had jolted her own childhood memories of growing up in Chechnya, the southern region torn apart by war after the breakup of the Soviet Union.

“I absolutely do not feel like a hero…You know, I really want to feel like this sacrifice was not in vain, and that people will open their eyes,” the editor at Channel One told Reuters from Russia.

“I believe in what I did but I now understand the scale of the problems that I’ll have to deal with, and, of course, I’m extremely concerned for my safety,” Ovsyannikova said.

Thousands of Russians have been detained for taking to the streets to protest the war but Ovsyannikova went further, holding up an anti-propaganda sign behind a studio presenter reading the news at prime time and shouting anti-war slogans.

State TV is a vital platform for the Kremlin, which portrays the invasion as a “special military operation” essential to prevent what it says is genocide against Russian-speakers.

Ukraine and the West dismiss that justification as a false pretext for an invasion of a sovereign country.

“The worst thing is when Ukrainians ring Russians and Russians ring Ukrainians, there’s always a conflict because the media and propaganda have divided us and put us on opposing sides of the barricades,” Ovsyannikova said.

The 43-year-old, whose father was Ukrainian, said she had no plans to leave Russia.

She told Reuters she was held in a police station and questioned overnight and had no access to a lawyer until the following afternoon when she was taken to court and fined 30,000 roubles ($280).

The Kremlin denounced her act of protest as “hooliganism” and commended Channel One for its news coverage. read more

Reuters submitted a written request on Wednesday to ask the interior ministry for further comment on her case and whether legal proceedings had been closed.

Her case stirred fears among her sympathisers that she could be prosecuted under new legislation criminalising actions that discredit the Russian army with a jail term of up to 15 years.

Ovsyannikova, mother to children aged 11 and 17, said she hoped she would not face criminal charges.

“If I end up having to serve time in jail for what I believe in then I hope it’s a minimal sentence,” she said.

Ovsyannikova said she had initially supported President Vladimir Putin, but had grown disillusioned with politics and that the war in Ukraine had first reduced her to a state of shock and then tipped her over the edge.

“The war in Ukraine was like a trigger for me. Very vivid images from my childhood (in Chechnya) came flooding back. I understood… I could feel what those unfortunate people (in Ukraine) are going through. It’s really beyond the pale,” she said.

As a child, she lived in Chechnya’s Grozny and remembers gathering up her things and having to leave suddenly in 1991 as the southern Russian region where the Russian army later fought two wars to put down a separatist and Islamist movement.

“There was shelling, I was 12 years old, we gathered up our things and left,” she said.

She first considered taking to a square near the Kremlin to protest, but concluded that would have little actual effect.

She said she wanted not only to protest against the war but also to sent a message to Russians directly: