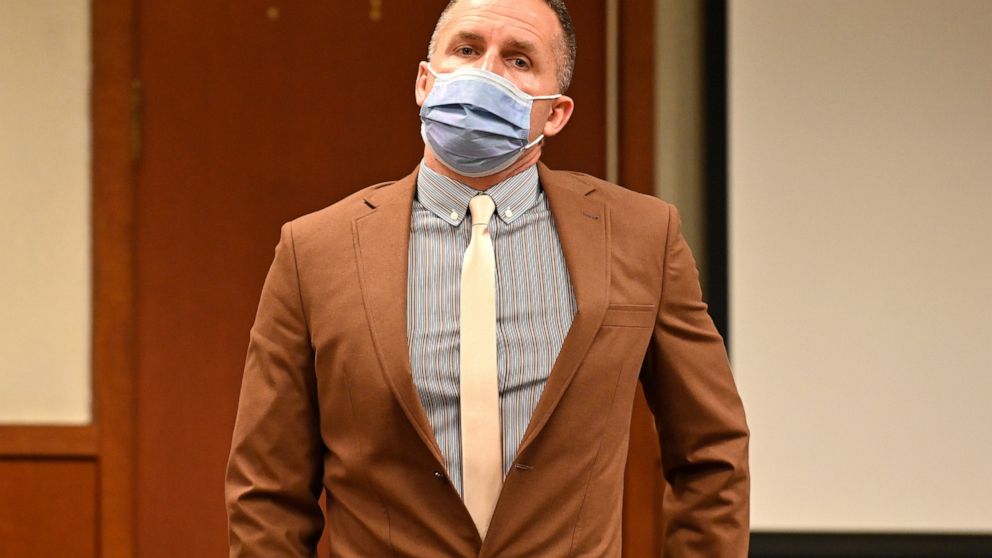 LOUISVILLE, Ky. — Brett Hankison said he believed the Louisville officers who raided Breonna Taylor’s apartment were taking fire from an AR-15 rifle, which he said prompted him to fire 10 shots into her apartment.

Hankison said as much to investigators about two weeks after his fellow officers fatally shot Taylor during a nighttime raid of the Black woman’s apartment. A recording of the interview was played at Hankison’s wanton endangerment trial in Louisville on Thursday.

“I was under the impression (the officers) were getting sprayed with bullets” at Taylor’s front door, Hankison told investigators with Louisville’s Public Integrity Unit in the March 25, 2020, interview.

Hankison said he glanced through the open door and thought he saw “a figure in a shooting stance” with “a long gun or AR rifle.” He told the interviewer he pulled away amid rapid gunfire, turned a corner and saw more muzzle flashes through the blinds of her sliding glass door, so he opened fire in his fellow officers’ defense.

The narcotics detective was fired a few months later. Hankison was not charged in Taylor’s shooting death, but some bullets he fired through Taylor’s sliding glass door and bedroom window went into a neighbor’s apartment, coming close to striking a man inside. Police officials who dismissed him said he fired “blindly” into Taylor’s apartment.

The interview with Hankison preceded any protests about Taylor’s death, when awareness of the botched raid was low and public officials were focused on the beginning of the COVID-19 pandemic. At one point, Hankison said he couldn’t remember the name of the woman who was shot. It would be another two months before George Floyd’ s death in Minnesota sparked interest in Taylor’s death at the hands of the police.

Hankison is charged with three counts, endangering Taylor’s neighbor, his girlfriend and her son. The felony is punishable by one to five years in prison in Kentucky.

Sgt. Jason Vance with Louisville’s public integrity unit conducted the interview with Hankison, and testified Thursday that a thorough search of Taylor’s apartment turned up no illegal drugs or long guns. Describing ballistics evidence on Wednesday, he noted a single bullet from Taylor’s boyfriend’s handgun, and many shell casings from the officers’ weapons.

Taylor’s boyfriend fired that shot as officers burst through the door, striking Sgt. Jonathan Mattingly in the thigh. The handgun was found under a bed.

Footage from body cameras worn by members of the Louisville police SWAT team, shown in court Thursday, shows Hankison step into the apartment with a flashlight while SWAT officers are clearing the scene. He asks if anyone is dead inside, and inquires about shell casings and whether any guns have been found in the apartment.

A SWAT officer asks Hankison to back out of the scene until public integrity investigators have arrived.

Hankison and the other officers serving the narcotics warrant did not turn on their body cameras, so no video of the raid was available. After Taylor’s death, Louisville police changed their policy to require that body-worn cameras be turned on for all search warrants.

During opening statements Wednesday, prosecutors emphasized to jurors that the case is not about the killing of Taylor or police decisions that led to the raid. They said the focus should be on Hankison’s shots and the near harm they caused.

Hankison’s attorney, Stewart Mathews, told jurors that when the gunfire began, Hankison “was attempting to defend and save the lives of his fellow officers” and followed his police training.

Mathews said Hankison’s shooting was justified during a chaotic scene lasting just 10 to 15 seconds. On Thursday, Mathews highlighted that Hankison helped set up a perimeter after the shooting, assisted in bringing Taylor’s boyfriend, Kenneth Walker, into custody and warned incoming officers of possible long guns inside the apartment.