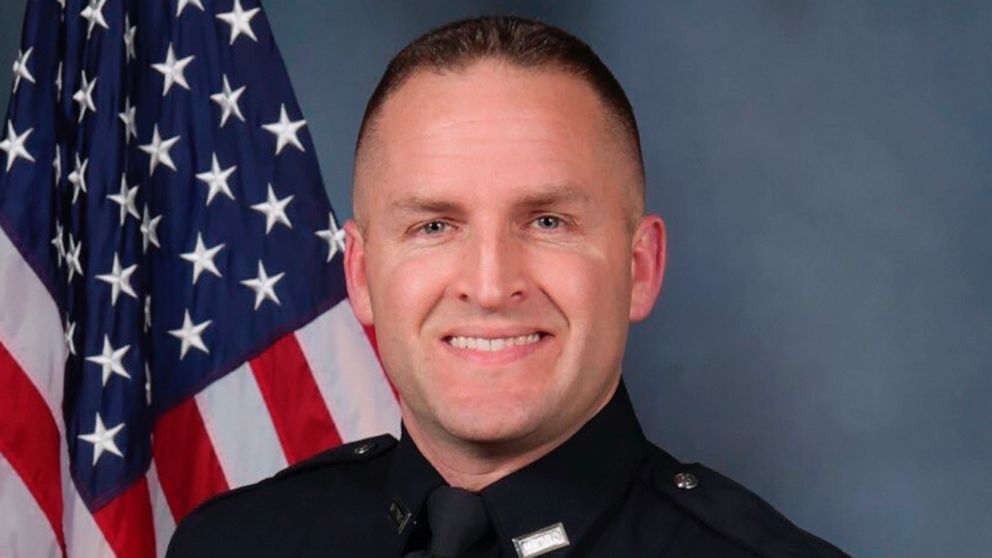 Brett Hankison, now a former officer, fired 10 shots, none of which hit the Black woman, but prosecutors said they endangered the couple and child who lived next door. He faces up to five years in prison if convicted of three counts of wanton endangerment.

Assistant Kentucky Attorney General Barbara Maines Whaley told jurors the case is not about the killing of Taylor, for which the city of Louisville paid a settlement to her family, an amount that won’t bring her back. Nor, she said, is it about police decisions that led to the raid. She said the charges are focused on Hankinson’s decision to fire blindly through Taylor’s apartment, endangering her neighbors.

Before Taylor’s front door was breached, Hankison escalated the situation by yelling at a neighbor to go back inside, she said. And once the shooting started, “He’s shooting in a different direction than the other two detectives,” she said.

Defense attorney Stewart Mathews countered that Hankison’s shooting was justified during a chaotic scene lasting just 10 to 15 seconds from when Taylor’s door was breached to when the shooting stopped.

“This case is not about the death of Breonna Taylor, but in a sense it’s totally about that, because that’s what started this whole situation,” Mathews said. “Breonna Taylor was a peripheral part of this whole deal, but she was tied into it,” and their search warrant meant officers had been approved to go inside.

Once the gunfire began, Hankison “was attempting to defend and save the lives of his fellow officers who he thought were still caught in that fatal funnel inside that doorway,” Mathews said. He was doing what “he was taught to do — he was taught to shoot until the threat is stopped.”

Taylor’s neighbor Cody Etherton was the first witness, describing how he and his pregnant girlfriend Chelsey Napper were jolted awake that night by the sound of her door being breached. Thinking someone was breaking down his door, he said he jumped out of bed to investigate, narrowly escaping bullets that penetrated their shared wall.

“I pretty much knew it was gunfire going through the wall. I do remodeling for a living, so when drywall started hitting my face, I pretty much knew. I hit the floor and went back into the bedroom,” he said. “I don’t even remember how many shots I heard because it was so chaotic.”

“Another one or two inches and I woulda gotten shot. I would have never gotten to meet my son,” Etherton added.

Etherton said he stepped outside after the shooting stopped, looked through Taylor’s open door and heard a man saying “breathe, baby, breathe.” Police ordered him inside, but he said he kept watching through his peephole and could see a Black man being arrested. Later, he and his girlfriend looked once more through Taylor’s door, and saw a body covered in a white sheet.

On cross-examination, Etherton acknowledged that “the whole thing was chaotic.”

“From the time I got woke up, hearing boom, to the gunfire coming through my apartment, nearly killing my girlfriend, yeah it was chaotic,” he said.

Mathews also questioned the $12 million civil suit Etherton and Napper filed against Louisville and its police. “That’s not influencing your testimony, the fact that you want to get some money out of this?” Mathews asked.

“Of course we want to be compensated, but Chelsey and I have never talked about how much money we want out of this,” Etherton said.

Other officers then took the stand, saying that while a “no-knock warrant” had been approved for Taylor’s apartment, they were told that night to instead “knock and announce” the search. Det. Tony James said this normally delays entry by no more than 15 seconds, but he and Det. Mike Nobles said their knocking unfortunately drew out an upstairs neighbor who told the officers to go away.

Hankison, positioned farther away from Taylor’s door, got distracted ordering the man to go back inside, they testified.

Nobles said they ultimately spent two to three minutes knocking and announcing themselves, during which time he heard someone say “who is it?” from inside Taylor’s apartment.

“Police – search warrant!” Nobles said they announced, and hearing no reply, he used a battering ram to break open the door on the third blow.

Taylor’s boyfriend, Kenneth Walker, who fired a handgun that struck Det. Jonathan Mattingly in the groin, has told investigators he heard knocking on the door, but never heard them say “police” and wasn’t sure who was breaking in.

Pressed to describe exactly where Hankison was during the shooting, Nobles said he couldn’t recall and James said he couldn’t tell. All the officers, save Nobles with the battering ram, had their weapons drawn, James acknowledged. Asked why he didn’t fire into the apartment, James said “because I didn’t have a clear identifiable target.”

Sgt. Michael Campbell testified that just before the shooting began, he was standing with Hankison near the foot of the stairs extending over the front doors of Taylor and Etherton’s ground-floor apartments. He described how two other officers fired through the front door, but like his colleagues, testified that he couldn’t tell what Hankison did.

“I don’t remember where he was at that point. I didn’t see him shoot,” Campbell said.

Pressed by a prosecutor, Campbell said he later saw bullet holes in Taylor’s sliding glass door, around the corner from the front door, and acknowledged that he couldn’t see through it into the apartment inside.

Judge Ann Bailey Smith swore in 10 men and 5 women as jurors and alternates, but released no information about their race or ethnicity.

Taylor, 26, worked as an emergency medical tech and was settling down for bed on March 13, 2020 when Louisville officers with a narcotics warrant kicked in her door. They drew fire from Taylor’s boyfriend, who thought an intruder was breaking in. Two officers at the door returned fire, killing Taylor. Neither was charged in her death. Louisville settled with her family for $12 million.

Her name, along with George Floyd and Ahmaud Arbery — Black men who died in encounters with police and white pursuers — became rallying cries during racial justice protests seen around the world in 2020.

This story has been corrected; Napper was Etherton’s girlfriend, not wife. Warren reported from Atlanta.