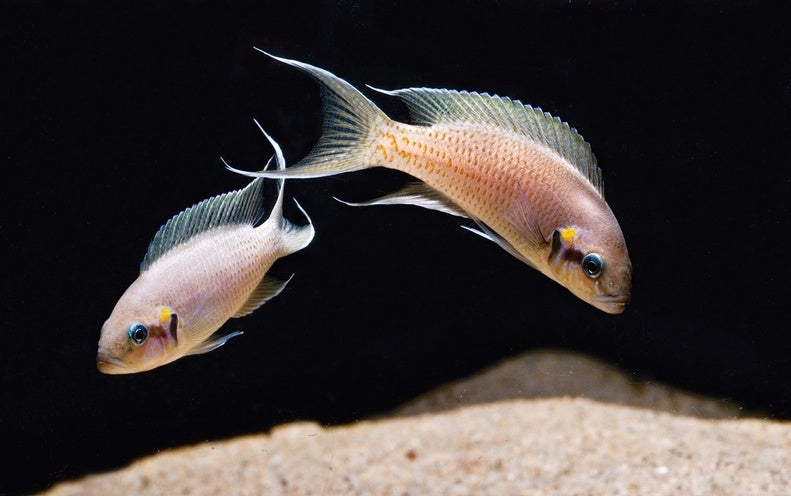 Darwin’s finches are perhaps the best-known examples of adaptive radiation—the evolutionary phenomenon in which one ancestral species rapidly diversifies into several new ones, each with unique adaptations for surviving in its own environment. But these Galápagos birds have nothing on the cichlids of East Africa. In the same two or three million years it took for 14 finch species to evolve, more than 1,000 cichlid species diverged from common ancestors in Lake Malawi alone. New research is now revealing the genetic mechanisms behind such rapid and dramatic biodiversity.

Cichlids exhibit a wild variety of body shapes, coloration patterns, mouth structures, behaviors, diets, and more. “When you look at them, they look so starkly different,” says Earlham Institute evolutionary biologist Tarang Mehta. “But when you compare the [protein-coding] genes of these species, you see very little diversity.”

Protein-coding genes influence an organism’s major traits. Previous research had already indicated that cichlids’ “noncoding” or “regulatory” stretches of DNA—which determine how, when and where the coding genes are turned on and off—evolved more rapidly than their coding genes. These regulatory spans let the same set of genetic puzzle pieces fit together in thousands of different configurations, a phenomenon Mehta refers to as “tinkering.” But scientists were unsure whether this tinkering could drive the evolution of new species.

For a study published in Genome Biology, Mehta and his colleagues analyzed gene expression in the brain, eye, heart, kidney, muscle tissue and testis of five cichlid species from East African rivers and lakes. Using a computational model they developed, the researchers found that changes in the genomes’ noncoding regions contributed a “substantial portion of the evolutionary substrate in adaptations” that led to divergence, says study senior author and University of East Anglia biologist Federica Di Palma. For example, the team found that regulatory changes altered certain coding genes’ expression to let cichlids see better in various specific conditions. When species shared similar diets or habitats, they were more likely to evolve similar changes to these regulatory networks.

Many biologists worry about the accelerating loss of Earth’s biodiversity—but science still does not fully understand how biodiversity evolves in the first place, says University of Basel zoologist Walter Salzburger, who was not involved with the study. The cichlids in Lakes Malawi, Tanganyika and Victoria offer researchers a unique opportunity to peer into that process, he adds.

Mehta’s team is now applying the same kind of analysis to tilapia, a cichlid group that includes the world’s second-most farmed fish. If the researchers can identify the genomic tinkering associated with traits such as adaptation to extreme salinity or temperature, Mehta says, this could guide the selective breeding of tilapia to more efficiently feed a hungry world.