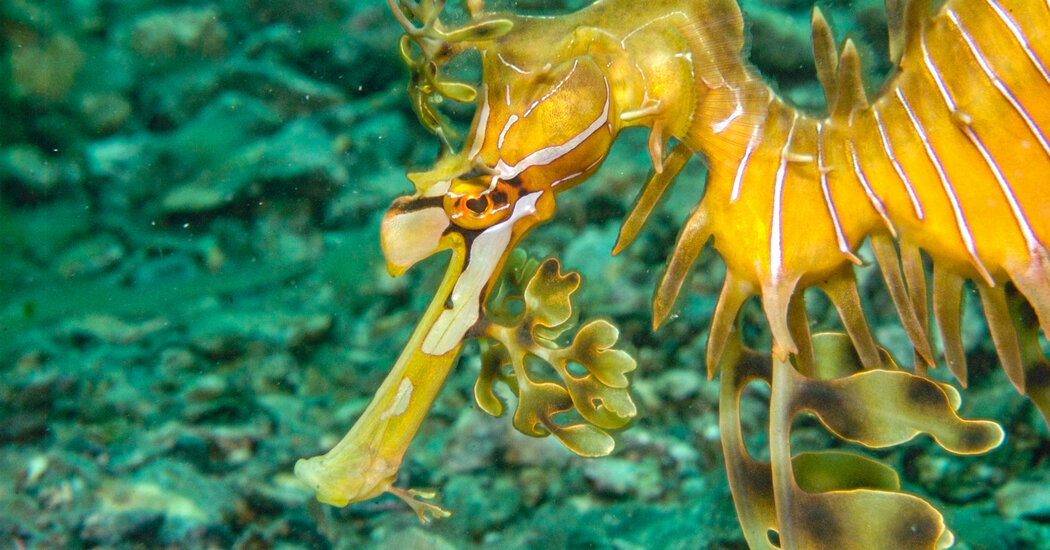 Among the ocean’s menagerie of bizarre creatures, sea dragons stand out. Relatives of sea horses and pipefish, sea dragons have long narrow snouts that they use like a straw to suck up meals of microscopic crustaceans. Instead of scales, the fish are covered in bony armor, and their backbones are kinked. Like their sea horse cousins, male sea dragons gestate a female’s fertilized eggs in a pouch.

They come in two groups of species, leafy and weedy. “Leafies” have elaborate branching appendages that make them virtually indistinguishable from the floating seaweed in their Southern Australian habitats. Weedy sea dragons are more streamlined but are also more colorful, with purple stripes and yellow polka dots.

Bill Cresko at the University of Oregon studies sea dragon genetics to answer one fundamental question: He and his colleagues want to know “how the hell” these fish came to look the way they do.

“We’re just really fascinated by, ‘How can you have an organism that looks like that? What has changed in the genome?’” he said.

A study published in June in the Proceedings of the National Academy of Sciences tried to answer these questions. Researchers sequenced the genomes of leafy and weedy sea dragons and compared them with other fish.

The strange appearance of sea dragons made the team think that there might have been something unusual happening with their fibroblast growth factor genes, “which are really important for development of things like teeth, which they don’t have, or the shape of faces or appendage outgrowth, to name just a few,” said Susie Bassham, a researcher in Dr. Cresko’s lab and an author of the paper.

But when they zeroed in on the animals’ genomes, the researchers were surprised to see that sea dragons were missing several of these key developmental genes altogether.

“I didn’t really believe it at first,” said Clay Small, another author of the paper also at the University of Oregon.

While the sea dragons were missing these growth genes, their genomes were packed with repetitive sections of code called transposons. This sort of repetitive code throughout the genome was once called “junk DNA,” as scientists were not sure what it did. But transposons, or “jumping genes,” are actually capable of cutting and pasting themselves from one spot within the genetic code to another, preventing other genes from shaping an organism’s traits.

The researchers cannot say for sure if the jumping genes are responsible for the absence of the growth factor genes. There is evidence of repeating genetic code near the spots where genes are missing, which might point to transposon activity, Dr. Small said. But scientists will need more genomes from across the fish family tree to confirm a cause-and-effect relationship.

In addition to studying sea dragon DNA, the team also CT-scanned a weedy sea dragon in the highest resolution they knew of to ever be captured. The X-ray images gave them insights into the fish’s paddle-like appendages, which the researchers now suspect are modified spiny growths.

Axel Meyer, a sea dragon researcher at the University of Konstanz in Germany, says the study furthers understanding of extreme body plans. “This is a poster child of the exuberance of evolution. It’s sort of like evolution gone crazy,” said Dr. Meyer, who was not involved with the study. “The fun of being an evolutionary biologist is, you get to study these crazy animals and try to make sense of them genetically.”

Sea dragon DNA could give insights into how to conserve them, Dr. Cresko says, which is critical because are rare in the wild and hard to keep in captivity. A single fish can cost upward of $10,000, and they have proven almost impossible to breed.

“Believe me, there’s a lot of people that work with me that do not want to take care of them because it is a lot of work,” said Leslee Matsushige, who has cared for sea dragons at the Birch Aquarium at the Scripps Institution of Oceanography in San Diego, for over 20 years. The fish are sensitive to fluctuations in temperature and light, requiring gradual shifts to mimic sunrise and sunset; Ms. Matsushige has even tried to match the tank’s night light to the phases of the moon.

In spite of the difficulties, Ms. Matsushige says it is important for aquariums like Birch and the Tennessee Aquarium — both of which supplied sea dragon tissues for the DNA study — to find ways to help the dragons thrive. As climate change threatens their habitats, sea dragons’ survival might depend on breeding programs at zoos and aquariums, so it is important to “know as much as we can.”