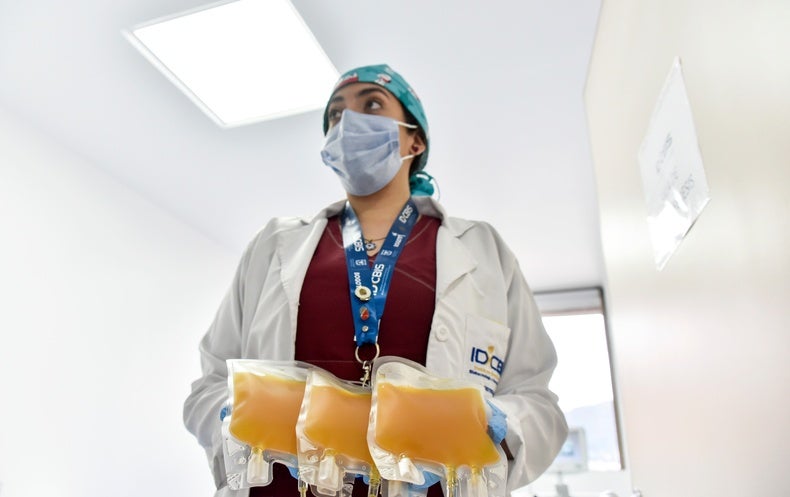 Update August 24: The US Food and Drug Administration issued an emergency-use authorization on August 23 to treat COVID-19 with convalescent plasma.

US President Donald Trump has called on COVID-19 survivors to donate their blood plasma as a treatment for the disease, saying that “it’s had tremendous response so far”. Meanwhile, rumours have been swirling that US drug regulators are grappling with whether to give the plasma to more people by authorizing it as an emergency therapy. But researchers and clinicians around the world are concerned that a push to distribute blood plasma could undermine the clinical trials needed to determine whether it actually works against COVID-19.

Although some US hospitals already offer the treatment in special cases, an emergency-use authorization from the Food and Drug Administration (FDA) would make it easier to obtain and administer convalescent plasma — the yellow liquid that remains after cells are removed from blood.

But so far, there’s little evidence that plasma actually helps patients, and the decision could confound efforts to study its effects, says former FDA commissioner Robert Califf, who now heads clinical policy and strategy at Verily and Google Health in South San Francisco, California. The antiviral drug remdesivir and the anti-inflammatory medicine dexamethasone are the only treatments that have been shown to combat COVID-19 in rigorous clinical trials.

Convalescent plasma has been tested only in small trials without the statistical power to provide firm conclusions. The FDA didn’t respond to queries from Nature about where things stand with its decision to authorize convalescent plasma. But if the FDA issues an authorization, experts say, people with COVID-19 might choose to access the treatment directly, rather than sign up for a clinical trial and risk being assigned to a control group that does not receive plasma.

“It’s a potential therapy that could work, and I don’t think it’s out of bounds to make it available” with an authorization, says Califf. “But we ought to be really emphasizing in public-service announcements that participation in randomized trials is a first priority.”

For more than a century, doctors have used the convalescent plasma of donors recovering from infections to treat others with the same disease, including Ebola and Middle East respiratory syndrome (MERS), which is also caused by a coronavirus. The idea is that plasma contains antibodies and proteins involved in regulating immune responses. And some of these antibodies might have helped the donor to recover from their infection — so giving it to infected people could kick-start their recovery. Although there have been few data on whether convalescent plasma definitely improves outcomes for people with other diseases, it was logical to test the treatment against COVID-19 when the outbreak began. But researchers have struggled to nail down its effectiveness in the middle of the pandemic, says Michael Joyner, an anaesthesiologist at Mayo Clinic in Rochester, Minnesota.

For one thing, convalescent plasma from different people varies widely in antibody concentration, making it challenging to study. At first, researchers had no way to measure and standardize the level of antibodies in each batch. Even now, researchers in some parts of the world are not able to test whether plasma contains powerful ‘neutralizing antibodies’, which can prevent viral replication, because the assay is expensive and requires certain containment procedures, says infectious-disease specialist Fazle Chowdhury at the Bangabandhu Sheikh Mujib Medical University in Dhaka.

Collecting rigorous clinical-trial data has also been difficult because doctors have been administering convalescent plasma to severely ill people on a ‘compassionate use’ basis. In the United States, a special programme funded by the Biomedical Advanced Research and Development Authority (BARDA) has provided convalescent plasma on this basis to more than 66,000 people — without running any control groups. The programme’s investigators — including Joyner — have been gathering data and have published results from 5,000 people with severe COVID-19, suggesting that the therapy is broadly safe.

“We really don’t know what is happening when you use it on a compassionate basis,” says Chowdhury. “If we use convalescent plasma, it should be under clinical trial.” US researchers have complained that the BARDA-funded project has siphoned away potential participants and plasma donors from randomized clinical trials that would produce more rigorous data.

In the absence of a control group, Joyner and his colleagues have taken advantage of the fact that the concentration of SARS-CoV-2 antibodies was not standardized. The team looked at more than 35,000 plasma recipients, and compared results from those who received plasma with relatively low levels of antibodies with findings from people who got plasma with higher levels. The study, published on the medRxiv preprint server before peer review, found that participants who received transfusions soon after their diagnosis and got high concentrations of antibodies showed more improvement and were less likely to die in the study period than were those who received later transfusions with lower antibody concentrations. “This was an extremely important finding,” says Cassandra Josephson, a paediatrician at Emory University in Atlanta, Georgia, who has been treating children who have COVID-19.

But the lack of randomization makes it difficult to draw a firm conclusion from the study, cautions Anthony Gordon, an anaesthetist at Imperial College London. For example, patients who received the treatment soon after diagnosis may have been treated at medical centres that provided better health care, he says, raising their chance of a better outcome. “We’re just seeing an association,” he says. “We’re not seeing cause and effect.”

Filling in the gaps

In lieu of conventional large clinical trials with statistical power, some researchers are trying to piece together evidence from smaller tests. Another not-yet peer-reviewed preprint by Joyner and his colleagues, published on medRxiv on 30 July, compiles data from more than 800 participants across a dozen studies — in the hope of boosting statistical power. The team found that the treatment cut mortality from 26% to 13%.

But it’s difficult to draw a firm conclusion from data combined from disparate studies, cautions Josephson. The trials treated people with varying disease severity, using different doses of plasma and tracking a range of measures of success. “There are a lot of things to pick apart” about the analysis, says Josephson. At the same time, it’s not without value. “We had nothing before except for safety data.”

And there are still data to come. In the United Kingdom, epidemiologist Martin Landray and infectious-disease researcher Peter Horby, both at the University of Oxford, are leading the large RECOVERY trial, which is testing several therapies, including convalescent plasma, in people hospitalized with COVID-19. And Gordon and his colleagues are testing convalescent plasma in people in intensive care, in an international trial called REMAP-CAP. But the first surge of the pandemic in the United Kingdom has largely passed, so Landray says that he does not expect to have results until later in the year, when some epidemiological models predict COVID-19 cases will rise again. In the meantime, he says, the RECOVERY team is stockpiling plasma from donors, to deploy rapidly if that surge arrives.

Landray cautions against assuming that convalescent plasma works until the data are in. “We have seen in this epidemic just how wrong well-meaning scientific hypotheses can be,” he says, pointing to hydroxychloroquine as an example. The malaria drug showed promise against COVID-19 in small, early trials and laboratory studies, but was eventually shown not to have an effect on the disease.

“There is good science behind convalescent plasma and a good reason for thinking that it may turn out to be an effective treatment,” Landray says. “But the bottom line is that we don’t have enough data to know.”

This article is reproduced with permission and was first published on August 19, 2020.

Read more about the coronavirus outbreak from Scientific American here. And read coverage from our international network of magazines here.