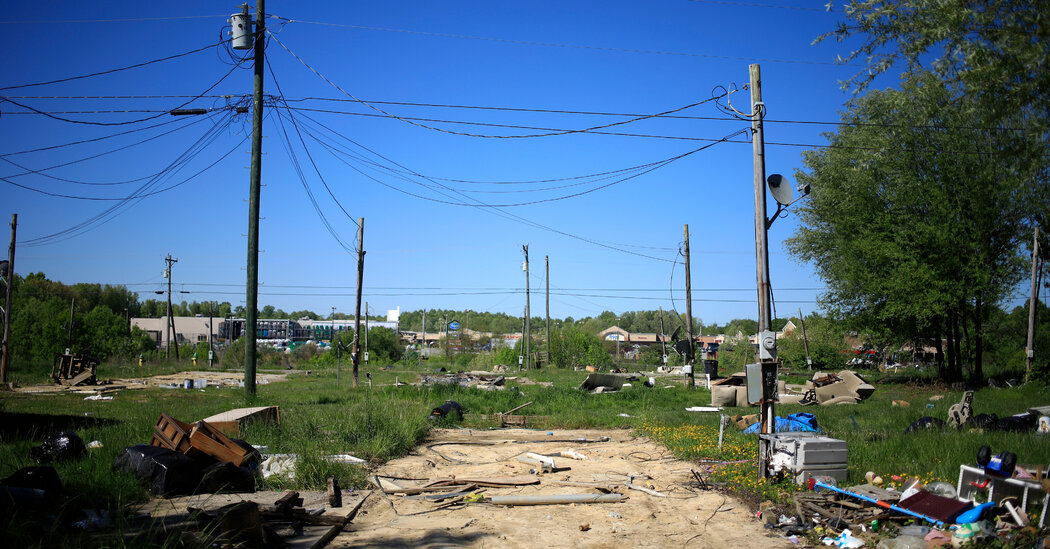 MOREHEAD, Ky. — Under a slate-colored sky, the holdouts gathered in what remained of the North Fork Mobile Home Park. Around them it looked as if a hurricane had blown through, leaving scattered cinder blocks, capsized sofas and porches affixed to thin air. The small circle — among them single mothers, a factory worker, a retiree, two community organizers — sat on kitchen chairs discussing their next move: recruiting for a boycott.

“People are going to slam their doors in our face, but we’ll do it anyway,” said Mindy Davenport, 57, who has lived in the park for 26 years. One of the organizers sympathized: It was hard to talk to people you did not know.

Ms. Davenport, a former preschool aide, laughed. That was not the issue. “I know everybody in this town,” she said.

For more than two months, a fight has burned in Morehead, a small college town in the hills of eastern Kentucky. It began in early March, when the residents of roughly 65 mobile homes at North Fork were told they had a month and a half to leave and take their homes with them. A new development was coming, bringing restaurants and stores, jobs and tax revenue. The city was subsidizing it. The trailer park had to go.

But as soon as the eviction letters went out, a protest campaign erupted, with chants and rallies, messages of support sent from as far away as California and Maine, and visits from prominent state voices like Charles Booker, a likely Democratic candidate for the 2022 U.S. Senate race. Current and former residents have loudly registered their dissent — with actions like the planned boycott of the eventual shopping center — and laid out a list of proposals to mostly unreceptive city officials, including financial compensation for people forced to move.

And though most of the homes have now been hauled away or left behind, the campaign has rolled on, along with a debate over the obligations of a city to those dislodged by its growth and a lesson about how combative democracy has become — even in a small town — in an age of social media and protest.

“Over the past two years, I have been in a lot of different things, with Black Lives Matter protesting and organizing,” said Faith Plank, 17, who now lives with her sister and mother in an apartment that is much smaller than their mobile home but costs nearly three times as much. “However, in this case, I don’t think I expected it to go this far.”

The owner of the park and the local officials were caught by surprise. People had always talked of wanting more restaurants and stores, said Harry Clark, the judge executive in Rowan County, where Morehead sits. And while he expected some understandable resistance to the evictions from the long-term residents of the park, he said, “it surprised me how mean they got.”

Joanne Fraley, who with her late husband had owned the park for years, said she, too, was taken aback by the response, insisting that she had been more accommodating than Kentucky law requires.

“It is my intent to leave no one homeless,” she said. But “it’s basically quite simple. I own my own property. I have the right to sell it.”

The park is decades old, sitting on what was once the Fraley family farm. Most of the residents owned their trailers, paying rent — most recently, $125 a month — for the lots on which the trailers stood. A number of homes had been there for many years and, even if well-kept on the inside, were no longer in shape to be moved.

Some people had come to the park to escape abusive home lives, some to be closer to jobs at the shopping center across the road and some because it was simply what they could afford. North Fork may have been scruffy in spots but it was a neighborhood, with gardens and mutual babysitting and chats over morning coffee.

It is unclear when plans for a development were first broached; the developer, from Lexington, Ky., told a news station the project had been in the works for nearly two years. One of the first public discussions was in September, when a development consultant made a presentation to the Morehead City Council, proposing a tax increment financing plan to subsidize a retail center where the trailer park stood.

“We would consider that to be some blight, if you will,” the consultant said. “But we have a plan to redevelop that site in a way that maximizes its value.”

Neither the mayor nor the developer returned messages seeking comment.

Notices of a hearing on the plan ran in tiny font in the back pages of a local newspaper, a weekly that few in the park read. Still, with most city meetings streamed on Facebook, word got out.

Ms. Davenport was sitting outside her trailer one afternoon, looking after a group of children, when a neighbor drove by with the news. “‘They’ve sold the trailer park’,” she recalled him saying. “‘They’re going to build a shopping center.’”

Months of rumor followed. Residents called the property manager constantly, several said, and the answer was always the same: No, nothing has been sold.

“I was not going to go out there and make this big announcement that my property was sold and they’d better start looking around and then have the contract fall through,” Ms. Fraley said. “At a time when there was Covid, there was maybe a chance it wouldn’t have gone through. And if I’d done that, I’d be sitting there with an empty piece of property.”

Some stopped paying rent. One resident started an online fund-raiser. In December, a resident wrote to Mr. Clark, lamenting that neither the city nor the park manager would give anyone straight answers. Mr. Clark wrote back that a sale appeared likely and advised him to “begin looking for new lots and accommodations immediately.” He also wrote that Ms. Fraley was offering $1,000 per household to help pay for moves that typically cost several thousand dollars. (A nonprofit organization would soon offer additional money, though not everyone qualified.)

Still, many at North Fork did not know whether a mass eviction was really going to happen, and what options they would have if it did. Ashley Caudill, a former resident, said she called more than a dozen mobile home parks in the county and found most were either full or not accepting trailers older than a certain age, a cutoff that would disqualify some of the mobile homes in North Fork. Those owners would have to abandon their homes, or sell them for cheap.

Finally, in March, the official letter came. “NOTICE TO VACATE.” They had until April 30.

Given the distinctive status of mobile home communities — made up at the same time of renters and established homeowners — a number of states have passed legal protections for residents, said Carolyn Carter, the deputy director of the National Consumer Law Center. Some mandate at least six months advance notice for a park’s closure; that period is two years in Massachusetts. Some require that residents be given the collective opportunity to buy their community if it is going to be sold.

“This isn’t Massachusetts,” Ms. Fraley said. Indeed, Kentucky has none of these laws.

Few in North Fork said they were opposed to the development in principle. What infuriated them was that a developer, a property owner and their own government representatives had worked together for months or perhaps years on a project that would throw their lives into disarray and nobody had reached out to them. Their neighborhood was simply, in the word used at the City Council meeting, “blight.”

“I used to be a little shy about telling people where I lived because I was a little nervous that they would look at me differently,” Faith Plank said. She does not feel that way anymore, she said. A few nights earlier, she had stood up at a crowded City Council meeting and talked about her trailer park and how beautiful it was.