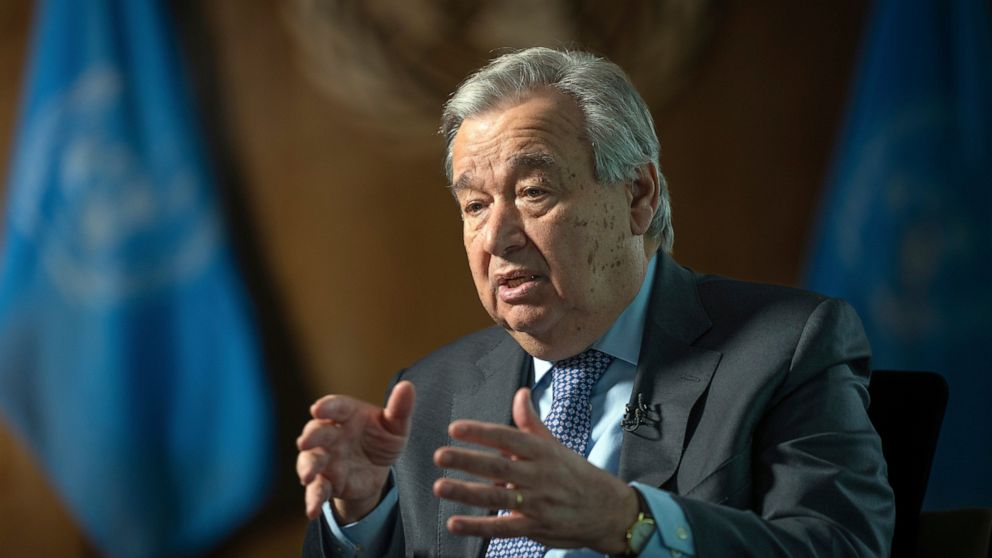 BERLIN — A panel of scientists convened by the United Nations has published a report on the impact that climate change has had, is having and will have on the planet, including on the natural world and human civilization. The report by the Intergovernmental Panel on Climate Change concludes that nearly half the world’s population already faces significant risk from global warming.

Its findings have prompted strong reaction from officials, scientists and climate activists, and calls for governments to step up ahead of this year’s U.N. climate conference, known as COP27.

Here are some of the comments following the release of the report.

“Today’s IPCC report is an atlas of human suffering and a damning indictment of failed climate leadership. With fact upon fact, this report reveals how people and the planet are getting clobbered by climate change (…) Unchecked carbon pollution is forcing the world’s most vulnerable on a frog march to destruction – now. The facts are undeniable. This abdication of leadership is criminal. The world’s biggest polluters are guilty of arson of our only home.” — Antonio Guterres, U.N. Secretary-General.

“This IPCC report is a fire alarm for the planet. We all know we are in a climate crisis, but this is a wake-up call that we’re facing an adaptation crisis too. … The rich, polluting, global north has changed the planet through fossil fuel burning and is now refusing to help those suffering the effects.” — Mohamed Adow, director of climate think tank Power Shift Africa.

“This requires immediate response from governments at the highest level. They have to be held to the promises they made at COP26 (climate negotiations in Glasgow in 2021). We realized at the end of COP26 that even if they implemented all the commitments, we would be on a 2.4-degree world. We know from this report that would be catastrophic, absolutely catastrophic.” — Mary Robinson, former president of Ireland, now with The Elders group of senior statesmen.

“The consequence of inaction will be catastrophic. You cannot read this report and believe anything otherwise. With an estimated 3.3 billion people, at least, highly vulnerable to climate change, nothing less than the most extreme measures to cut emissions and adapt to this crisis can be justified.” — Simon Stiell, Grenada’s Minister for Climate Resilience.

“The findings of the IPCC report sound like a nightmare, but they are a daily reality for families across Kenya and the global South. We are forced to survive climate impacts every day: Severe drought, water and food crises. More than 1.4 million animals have died due to the current drought, costing pastoralists their only means of supporting their families. We fear that soon it will be children dying from thirst and hunger.” — Susan Otieno, executive director of ActionAid Kenya.

“Difficult choices will have to be made. Which fires do we just let burn because we don’t have enough equipment to go around?” — Linda Mearns, National Center for Atmospheric Research climate scientist and reviewer for the report’s chapter on North America.

“I really hope that people reading this report will see how many opportunities we have, opportunities to adapt, if we start to really, really massively reduce our carbon footprint.” — Daniela Schmidt, coordinator of the IPCC report’s chapter on Europe and professor of paleobiology at Bristol University.

“We are continuing to head for a precipice — we say our eyes are open to the risks, but when you look at global emissions, if anything, we are accelerating towards the cliff edge.” — Walton Webson, Antiguan diplomat and chair of the Alliance of Small Island States.

“Denial and delay are not strategies, they are a recipe for disaster. Fortunately, we have a blueprint for action. The best scientists in the world have shown us that we must accelerate adaptation action, with urgency and at scale.” — John Kerry, U.S. climate envoy.

“One of the most striking conclusions in our report is that we’re seeing adverse impacts are being much more widespread and being much more negative than expected in prior reports.” —Camille Parmesan, report co-author and research director at the CNRS Station for Experimental and Theoretical Ecology in France.

“These different risks to most Americans are expected to intensify rapidly by the middle of the century. These risks will result in irreversible changes to ecosystems, mounting damages to infrastructure and housing, and really stress economic sectors and disrupt livelihoods, mental health, physical health and safety.” — Sherilee Harper of University of Alberta, co-author North America chapter.

“The report makes it clear that there is inadequate financial, governance and institutional support for adaptation and for addressing loss and damage. Rich countries must scale up funding to enable developing countries to prepare for unavoidable climate impacts.” — Harjeet Singh, senior adviser with Climate Action Network International.

“Richer countries bear a significant responsibility for climate action, including cutting their emissions sharply, paying for the loss and damage they have caused, and rapidly scaling up funding for climate-vulnerable developing nations.” — Rachel Cleetus, policy director and lead economist at the Union of Concerned Scientists.