Even Before War, Thousands Were Fleeing Russia for the U.S. 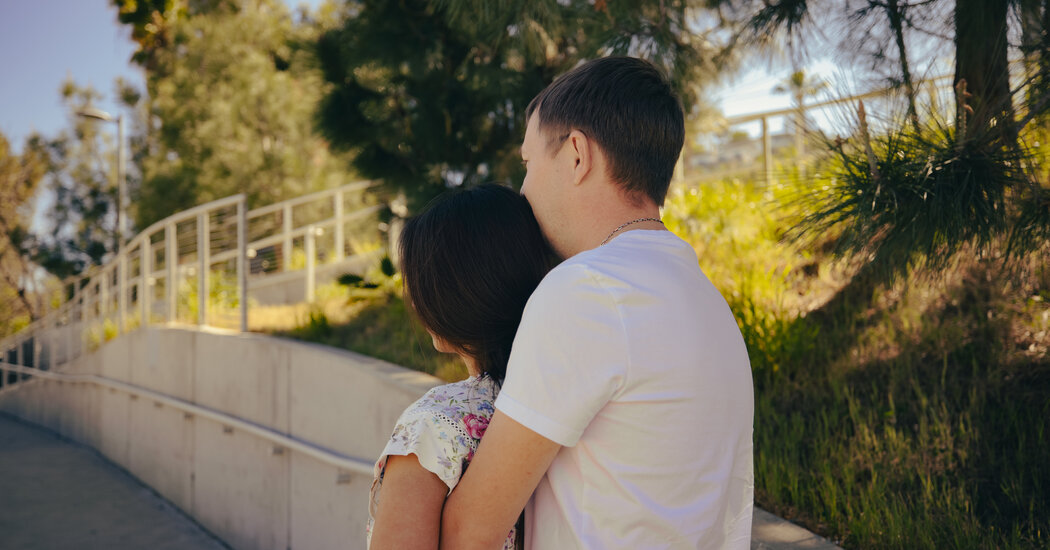 LOS ANGELES — Last fall, Iuliia Shuvalova and Sergei Ignatev, a young Russian couple, sold their car and took out a loan to pay for a holiday at a beach resort on Mexico’s Riviera Maya.

But they were not going on vacation. And they did not intend to return to Russia.

Once in Cancun, the couple purchased flights to Tijuana, a city just across the border from San Diego, and stayed there just long enough to buy a used car with a California license plate. At 4 a.m. on Dec. 2, they joined a line inching toward the U.S. border station in their $3,000 black Chrysler 200.

Ms. Shuvalova, 24, a political activist, said they were immediately honest with the American officers when they reached the inspection booth. “Sorry, we are Russians,” she told them. “We need asylum.”

At least two million Ukrainians have fled Russia’s assault on their nation to neighboring countries, and Russians, too, have been pouring out of their country in recent weeks amid crushing economic sanctions and a severe clampdown on public dissent. But a Russian exodus to the United States was already well underway, according to tallies on border crossings over the past year, as the number of Russians seeking asylum on the southern border grew to the highest numbers in recent history.

More than 4,100 Russians crossed the border without authorization in the 2021 fiscal year, nine times more than the previous year. This year, the numbers are even higher — 6,420 during the first four months alone.

Ukrainians have also been crossing in greater numbers, with 1,000 apprehensions in the first four months of fiscal 2022 — some as recent as this week — compared with 676 in 2021.

Like Ms. Shuvalova and Mr. Ignatev, many of the newly arriving Russians are supporters of the jailed Russian opposition leader Aleksei A. Navalny and said they no longer felt safe in their homeland. They include L.G.B.T.Q. people and religious minorities, such as Jehovah’s Witnesses, who were ostracized and harassed.

“I get calls every other day; people have been fleeing Russia like crazy,” said Anaida Zadykyan, an immigration lawyer in Los Angeles who has been helping Russians file asylum claims.

“Politically, the times in Russia are worse than during Stalin; people are living in terror,” said Ms. Zadykyan, who grew up in Moscow. “Economically, there is no money. People feel they can’t survive.”

The spike in Russian migration across the southern border coincides with a confluence of factors that have rendered it virtually impossible for Russians to enter the United States directly, and the number of asylum seekers soared in the months leading up to the invasion of Ukraine.

Strained relations between the United States and Russia had hobbled visa processing at the U.S. embassy in Moscow, as consular operations had also halted in nearby countries under pandemic shutdowns. All that limited legal options for reaching the United States, while Russians could still enter Mexico with relative ease, needing only a visa they obtained electronically.

Some Ukrainians have arrived at the U.S. border in the days since the Russian invasion began driving millions out of the country, though exact numbers have not yet been made public.

A mother and three children who showed up at the border in San Diego on Wednesday were refused entry, according to an immigrant advocate familiar with the case, but the U.S. authorities informed the family the following day that it would be allowed to enter.

Ukrainians in the United States have been inundating immigration lawyers with calls asking how they can sponsor relatives stranded in Poland and other countries. “There is newfound panic, and demand is overwhelming,” said Jeff Khurgel, a Russian-speaking lawyer in Irvine, Calif. U.S. consulates in some European cities have begun expediting visas, he said.

Russians and Ukrainians represent only a small fraction of all the people crossing the southern border. But unlike most migrants from Mexico and Central America, who have often been turned away since the beginning of the pandemic, they are being allowed to make asylum claims at ports of entry. And while a vast majority of asylum cases are ultimately denied, two-thirds of those from Russia and Ukraine have been winning their cases, according to government data analyzed by the Transactional Records Access Clearinghouse at Syracuse University.

Between June and Feb. 21, with the exception of one week, Russians were among the top-three nationalities assisted by the San Diego Rapid Response Network, which offers food and lodging to migrants after their release from U.S. border custody. The network has also been receiving a small but growing number of Ukrainians, and the volume is expected to increase in the aftermath of Russia’s invasion, assuming access to Mexico remains relatively easy.

“This is about to become a torrent,” said Lou Correa, a Democratic representative from California who recently testified in Congress about what he witnessed at the San Ysidro port of entry near San Diego. “You are going to have destitute Ukrainians and hungry Russians.”

A flight that he boarded from Cancun to Tijuana six weeks ago was packed with Russian speakers, he said in an interview.

To qualify for asylum in the United States, applicants must establish that they have a well-founded fear of persecution on account of their race, religion, nationality, political opinion or membership in a particular social group. All those who cross without visas are placed in deportation proceedings, and make a case for asylum during court hearings.

L.G.B.T.Q. people from Russia have for years been seeking asylum in the United States. But in recent years, the pressure against them in Russia has escalated with a spate of state-sanctioned discriminatory policies, especially in the Russian republic of Chechnya, according to advocates who have been working with the new immigrants.

“The increase in L.G.B.T.Q. asylum seekers coming over the border reflects the desperation that people are feeling,” said Tess Feldman, an immigration lawyer at the Los Angeles LGBT Center.

Jehovah’s Witnesses, subjected to raids and imprisonment since a Russian court labeled the Christian denomination an extremist group in 2017, have been heading to the U.S. border with photographs of themselves worshiping and proof they were baptized, said Mr. Khurgel, the immigration lawyer.

Most Russians driving through San Diego-area border crossings have been following tips shared by groups on the encrypted messaging app Telegram — about how to plan the journey, find car dealers in Tijuana and avoid arousing suspicions. (Hint: Don’t buy a beater car.)

In December, when a record 2,000 Russians were encountered, officers fired at two vehicles carrying 18 Russians as they raced toward the San Ysidro port of entry. Bullets hit one car, which crashed into the other, and two migrants suffered minor injuries.

Ilia Kiselev, 29, a Russian opposition activist who made the trip in November, said he had felt increasingly vulnerable after a Russian court last June classified organizations linked to Mr. Navalny, the jailed Kremlin critic, as extremist. He attended opposition rallies and hoisted posters denouncing parliamentary elections in September as a sham. The police in his hometown, Yaroslavl, wrote down his information and then came searching for him at his house, he said.

“I knew that I was a target, and I had to get out of Russia before it was too late,” Mr. Kiselev said in a recent interview at a cafe in Los Angeles.

In late November, he paid $1,500 for a vacation package to Playa del Carmen, a popular beach town south of Cancun. Once there, he spent $220 on airfare to Tijuana and to Mexico City; he never meant to fly to the capital but had read on Telegram that Mexican officials had been detaining Russians with one-way tickets to the border city.

From Tijuana, Mr. Kiselev and a fellow Russian rode to the border on a bright-red Honda motorcycle.

After requesting asylum, they were handcuffed and detained in a room with about 15 people, mainly from Russia, he recalled, until being allowed to proceed to Los Angeles.

His roommate, Vadim Fridovskii, 34, another activist, was turned back by American officers who were standing a few feet short of the port of entry. (Asylum claims can be made only by people who touch American soil.) A few hours later, Mr. Fridovskii and his group managed to make it to the drive-up window, and to request asylum.

Before deciding to seek asylum in the United States, Ms. Shuvalova and Mr. Ignatev said, they had participated in activities organized by supporters of Mr. Navalny in their hometown, Ulyanovsk.

“We saw with our own eyes people being beaten and arrested; we could be next,” Ms. Shuvalova, a chemist, said while sitting beside her husband, a chef, on a recent afternoon.

The couple tried to gain entry to Poland, only to be refused visas. So they turned to social networks, where people were swapping information about how to enter the United States via Mexico.

They told their families that they were planning a beach vacation in Mexico.

“They would never understand the truth. They think we are zombies, programmed by Western propaganda,” Ms. Shuvalova said.

In late November, the couple boarded a charter flight from Moscow to Cancun, with two carry-ons and one suitcase between them. The flight was full, the couple recalled.

They spent a few nail-biting days in Cancun arranging travel to Tijuana after getting a tip that the Mexican authorities had been arresting Russians in hotels. At the border town, they bought a car and, with the help of GPS, made their way to the border.

As their car crawled toward the checkpoint, Ms. Shuvalova said, she was trembling.

When they reached the window and requested asylum, “the American officers chuckled and replied, ‘Oh, more Russians,’” she recalled, before instructing them to pull to the side.

After two days in detention, the couple was bused to a San Diego shelter with a notice to appear in immigration court, their throwaway car impounded by the U.S. authorities.

Watching events unfold in Ukraine and Russia, they have been horrified but also especially grateful that they left their homeland, even though some relatives call them “traitors,” Mr. Ignatev said. The couple are expecting their first child, who will be an American.