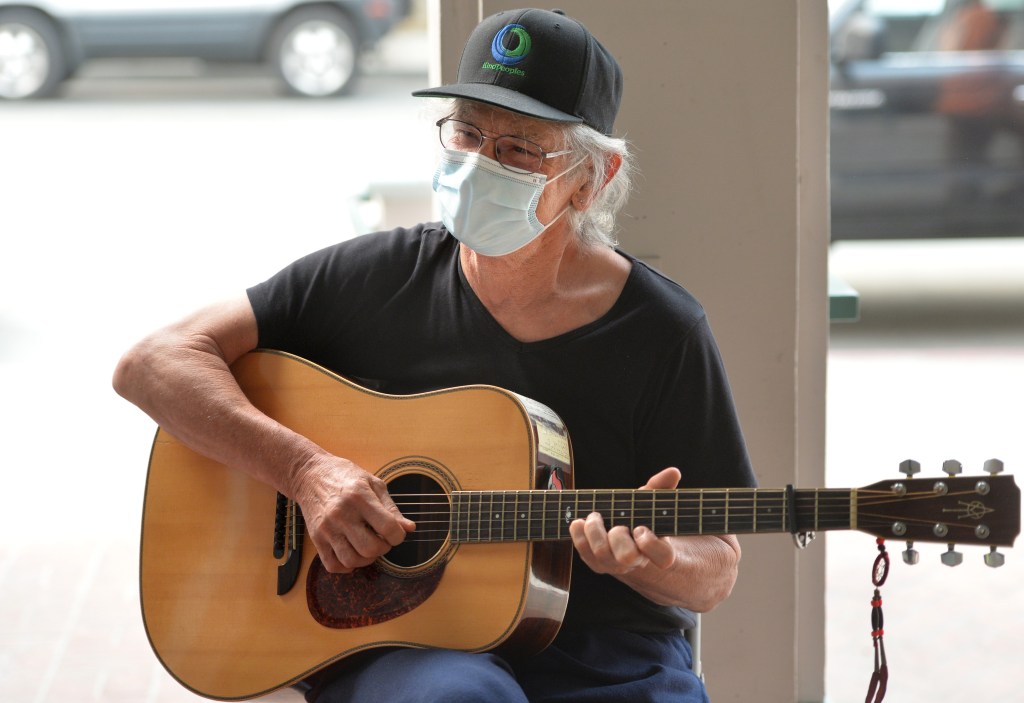 Click here if you are having trouble viewing the slideshow on a mobile device.

The last time John Culloty came to the Santa Cruz Civic Auditorium, Bill Maher was on stage before a packed crowd.

The venue looks a little different now — divided into rows of tents like an indoor campground. It’s hosting 70 of the 77,000 evacuees that have been forced to flee the Santa Cruz Mountains and parts of San Mateo County due to the devastating CZU Lightning Complex fire. Hundreds of them, including Culloty, are flooding into Santa Cruz, filling hotels and taking refuge at hastily designated evacuation centers like the auditorium.

Culloty fled from Ben Lomond on Tuesday, before the evacuation order came through. It was the first time in his 15 years living in the area that he’s had to evacuate.

“I didn’t wait around for them to chase me off,” he said. “I wanted to get down here before it got too crowded.”

The auditorium wasn’t too busy when he arrived that day, but Santa Cruz has seen more and more evacuees spill in over the week as fires continued to spread. By the empty boardwalk, UC Santa Cruz set up an evacuation center in the Cocoanut Grove to house displaced students and staff after Thursday’s campus evacuation order. Hotels across the region say they’re almost fully booked with evacuees, and many are also offering special deals to or only accepting those fleeing fires.

At one of those hotels, the Beach Street Inn & Suites, general manager Laura Waltz says that the hotel’s 48 rooms are almost completely full with evacuees, and she expects the handful of rooms left to be filled by the end of the day.

The evacuees are a mix between “pretty frazzled and pretty scared” and “a bit more optimistic,” she says, noting that the county has given enough time to evacuate that most people don’t seem to be scrambling.

Jayleen Shaeffer passed the time Friday afternoon with her family outside the Beach Street Inn & Suites at a picnic bench in the parking lot, overlooking the sea. Above, the sky was a pale grey, but even still they say today was the best air they’ve had in a while. She evacuated from Lompico on Wednesday, just before the evacuation order was announced, and she’s been staying at Beach Street since.

“We had blistering leaves and raining ash,” Shaeffer said of the conditions in Lompico. “We got out as fast as we could.”

She plans to stay at the inn until it’s safe to return home. The fires are six miles away from her house right now — and her husband’s prized Harley Davidson collection. But she counts herself lucky, tearing up as she spoke of two friends who’ve lost their homes to the fires already.

“The most important things aren’t things,” she said. “We have our photos and we have our family … that’s the blessing.”

Even over in Watsonville, Motel 6 has been booked up every day for the past week with evacuees, says receptionist Kevin Munoz.

“We have a couple coming from Boulder Creek, we have some from Scotts Valley, they’re coming from all over the northern area,” he said. “Their situations are all the same; they had to evacuate last minute, they lost a lot of their belongings, they’re sad, they’re devastated.”

Most of the evacuees  have lost their homes and are trying to stay for as long as they can, but cost has become an issue for some. Motel 6 isn’t currently offering any discounted rates, though Munoz says he’s trying to convince his managers to do so. In the meantime, some evacuees have been forced to leave because they can’t afford the motel’s higher weekend prices.

“I have gotten that all morning — ‘the prices are a little too much,’” he said. “It tears my heart.”

Up the coast, more than 400 people have sought shelter in San Mateo County evacuation centers and the Red Cross has placed more in hotels throughout the area.

Some of the evacuees in South San Mateo County are immigrants who work as cooks and house cleaners and have already been hit hard by the economic devastation of the coronavirus pandemic, according to Rita Mancera, executive director of Puente, a non-profit community group. Their reaction has varied from shock to sobbing in an evacuation center parking lot to stoicism, “We’ve been through so much already, we’re going to through this now and we’re going to be fine,” she said.

San Mateo County is providing housing vouchers, but they are only good for three days, so Puente is trying to figure out how to extend that. Mancera is herself an evacuee. She, her husband and teenage son left their home in Butano Creek on Friday with only a few suitcases. But her focus is on finding shelter for others.

“Housing is already limited and expensive,” Mancera said, “It just adds to the burden.”

There’s some help for families struggling with the costs of evacuation. Some of those with insurance and who were ordered to evacuate can get reimbursed for housing and other costs, depending on their policies. More than 400 people in Northern California have volunteered their homes through Airbnb, according to the company, and they’re working to connect them to evacuees. An untold number of evacuees are taking refuge with friends and relatives.

But with ash still falling on the streets in Santa Cruz, everyone holed up in hotels and shelters can only wait for now. At the Civic Auditorium, Culloty is doing his best to keep everyone’s spirits high. He brought his acoustic guitar, and with no comedians or rockstars coming by, he’s the night’s entertainment.

Under a blood orange sunset Friday, Culloty and fellow guitar player Michael Martyn gathered with several other evacuees outside the auditorium to sing and dance. They played Hotel California, one of his favorites. And he tried not to think about the fires still raging near his home.

“What else is there to do?” he said. “I’m not going to make myself a wreck worrying about it.”