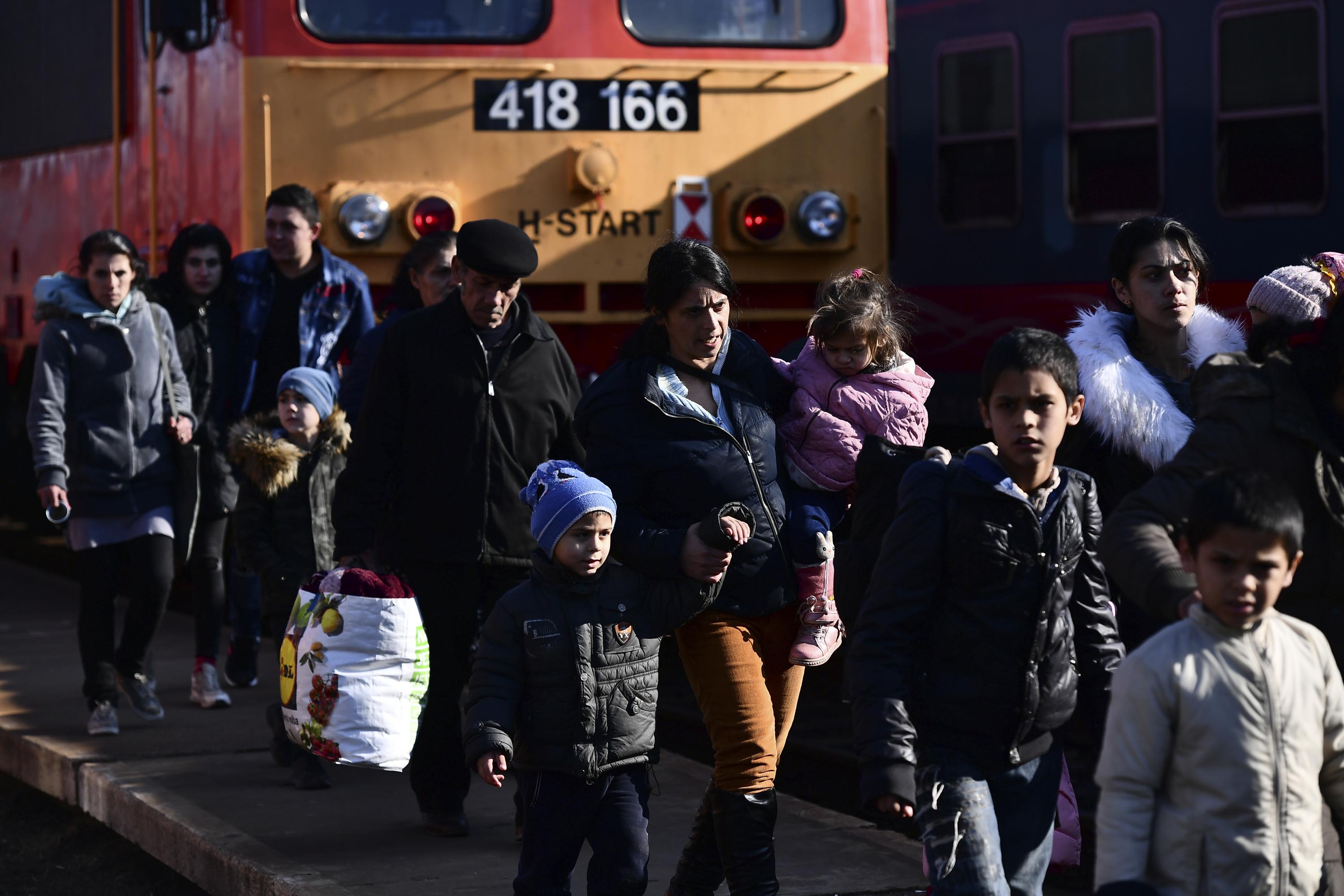 BARCELONA, Spain (AP) — They file into neighboring countries by the hundreds of thousands — refugees from Ukraine clutching children in one arm, belongings in the other. And they’re being heartily welcomed, by leaders of countries like Poland, Hungary, Bulgaria, Moldova and Romania.

But while the hospitality has been applauded, it has also highlighted stark differences in treatment given to migrants and refugees from the Middle East and Africa, particularly Syrians who came in 2015. Some of the language from these leaders has been disturbing to them, and deeply hurtful.

“These are not the refugees we are used to… these people are Europeans,” Bulgarian Prime Minister Kiril Petkov told journalists earlier this week, of the Ukrainians. “These people are intelligent, they are educated people. … This is not the refugee wave we have been used to, people we were not sure about their identity, people with unclear pasts, who could have been even terrorists…”

“In other words,” he added, “there is not a single European country now which is afraid of the current wave of refugees.”

Mohammad fled his hometown of Daraa in 2018. He now lives in Spain, and with other Syrian refugees founded the first bilingual magazine in Arabic and Spanish. He said he wasn’t surprised by the remarks from Petkov and others.

Mohammad described a sense of déjà vu as he followed events in Ukraine. Like thousands of Ukrainians, he also had to shelter underground to protect himself from Russian bombs. He also struggled to board an overcrowded bus to flee his town. He also was separated from his family at the border.

“A refugee is a refugee, whether European, African or Asian,” Mohammad said.

When it comes to Ukraine, the change in tone of some of Europe’s most extreme anti-migration leaders has been striking — from “We aren’t going to let anyone in” to “We’re letting everyone in.”

Those comments were made only three months apart by Hungarian Prime Minister Viktor Orban. In the first, in December, he was addressing migrants and refugees from the Middle East and Africa seeking to enter Europe via Hungary. In the second, this week, he was addressing people from Ukraine.

And it’s not just politicians. Some journalists are also being criticized for how they are reporting on and describing Ukrainian refugees. “These are prosperous, middle-class people,” an Al Jazeera English television presenter said. “These are not obviously refugees trying to get away from areas in the Middles East… in North Africa. They look like any European family that you would live next door to.”

The channel issued an apology saying the comments were insensitive and irresponsible.

CBS news also apologized after one of its correspondents said the conflict in Kyiv wasn’t “like Iraq or Afghanistan that has seen conflict raging for decades. This is a relatively civilized, relatively European” city.

When over a million people crossed into Europe in 2015, support for refugees fleeing wars in Syria, Iraq and Afghanistan was much greater. Of course, there were also moments of hostility — such as when a Hungarian camerawoman was filmed kicking and possibly tripping migrants along the country’s border with Serbia.

Still, back then, Germany’s chancellor, Angela Merkel, famously said “Wir schaffen das” or “We can do it,” and the Swedish prime minister urged citizens to “open your hearts” to refugees.

Volunteers gathered on Greek beaches to rescue exhausted families crossing on flimsy boats from Turkey. In Germany, they were greeted with applause at train and bus stations.

But the warm welcome soon ended after EU nations disagreed over how to share responsibility, with the main pushback coming from Central and Eastern European countries like Hungary and Poland. One by one, governments across Europe toughened migration and asylum policies, doubling down on border surveillance, earning the nickname of “Fortress Europe.”

And last year hundreds of people, mainly from Iraq and Syria but also from Africa, were left stranded in a no man’s land between Poland and Belarus as the EU accused Belarusian President Alexander Lukashenko of luring thousands of foreigners to its borders in retaliation for sanctions. At the time, Poland blocked access to aid groups and journalists. More than 15 people died in the cold.

Meanwhile, in the Mediterranean, the European Union has been heavily criticized for funding Libya to intercept migrants trying to reach its shores, helping to return them to abusive — and often deadly — detention centers.

“There is no way to avoid questions around the deeply embedded racism of European migration policies when we see how different the reactions of national governments and EU elites are to the people trying to reach Europe,” Lena Karamanidou, an independent migration and asylum researcher in Greece, wrote on Twitter.

Jeff Crisp, a former head of policy, development and evaluation at UNHCR, agreed that race and religion influenced treatment of refugees. Like many, he was struck by the double standard.

“Countries that had been really negative on the refugee issue and have made it very difficult for the EU to develop coherent refugee policy over the last decade, suddenly come forward with a much more positive response,” Crisp noted.

Much of Orban’s opposition to migration is based on his belief that to “preserve cultural homogeneity and ethnic homogeneity,” Hungary should not accept refugees from different cultures and different religions.

Members of Poland’s conservative nationalist ruling party have also consistently echoed Orban’s thinking on migration to protect Poland’s identity as a Christian nation and guarantee its security, they say, arguing that large Muslim populations could raise the risk of terror threats.

But none of these arguments has been applied to their Ukrainian neighbors, with whom they share historical and cultural ties. Parts of Ukraine today were once also parts of Poland and Hungary. Over 1 million Ukrainians live and work in Poland and hundreds of thousands more are scattered across Europe. Some 150,000 ethnic Hungarians also live in Western Ukraine, many of whom have Hungarian passports.

“It is not completely unnatural for people to feel more comfortable with people who come from nearby, who speak the (similar) language or have a (similar) culture,” Crisp said.

But as more and more people scrambled to flee as Russia advanced, several reports emerged of non-white residents of Ukraine, including Nigerians, Indians and Lebanese, getting stuck at the border with Poland. Unlike Ukrainians, many non-Europeans need visas to get into neighboring countries. Embassies from around the world were scrambling to assist their citizens struggling to get through chaotic border crossings out of Ukraine.

Videos shared on social media posted under the hashtag #AfricansinUkraine allegedly showed African students being held back from boarding trains out of Ukraine — to make space for Ukrainians.

In Poland, Ruchir Kataria, an Indian volunteer, told the Associated Press on Sunday that his compatriots got stuck on the Ukrainian side of the border crossing leading into Medyka, Poland. In Ukraine, they were initially told to go to Romania hundreds of kilometers away, he said, after they had already made long journeys on foot to the border, not eating for three days. Finally, on Monday they got through.

The United Nations Refugee Agency has urged “receiving countries (to) continue to welcome all those fleeing conflict and insecurity — irrespective of nationality and race.”

Vanessa Gera in Warsaw, Poland, and Justin Spike in Budapest, Hungary, contributed to this report.

An earlier version of this story erroneously attributed a quote to President Rumen Radev, instead of Prime Minister Kiril Petkov who said it.