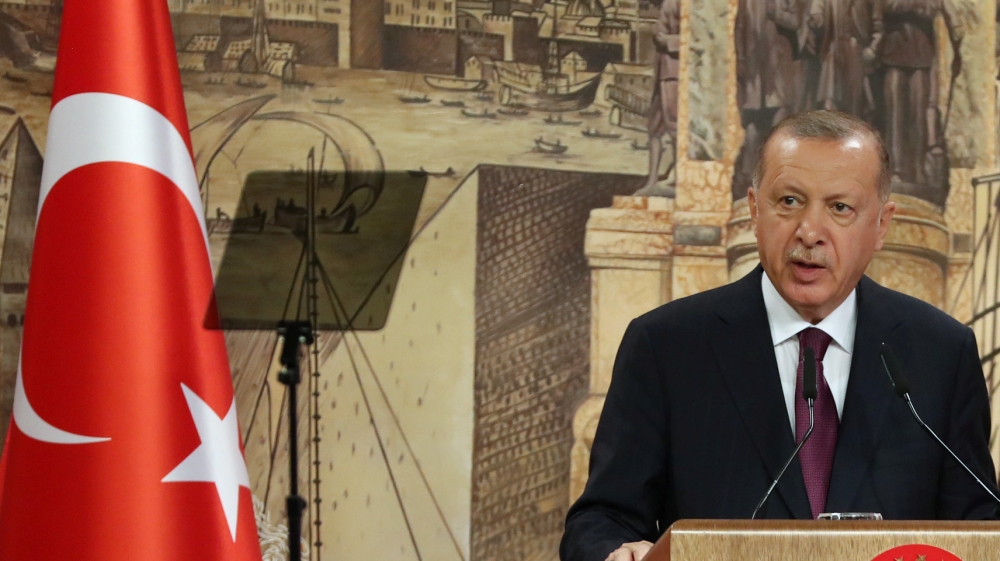 President Recep Tayyip Erdogan says Turkey is ready to meet with Greece’s leader to resolve the standoff over energy exploration in contested waters in the eastern Mediterranean.

The search for gas and oil in the region has sparked a dispute that has seen the two NATO neighbours stage rival air and navy drills in strategic waters between Cyprus and the Greek island of Crete.

“Could there be a meeting with Greek Prime Minister (Kyriakos) Mitsotakis? What’s essential is what we discuss and in what framework,” Erdogan told reporters in Istanbul after Friday prayers.

“We can meet if there is goodwill. We can talk via videoconference or meet in a third country,” Erdogan said.

Turkish Foreign Minister Mevlut Cavusoglu later on Friday said Greek Ambassador Michael-Christos Diamessi had been summoned to the foreign ministry in Ankara over an item in the Dimokratia newspaper.

The words “F*** off Mr. Erdogan” appeared in Turkish and English next to a photo of the president in the Greek newspaper.

“A Greek newspaper had a vile front page,” Cavusoglu said in Ankara. “We summoned the Greek ambassador to the ministry,” he added, quoted by state news agency Anadolu.

At the centre of the Greece-Turkey dispute was Ankara’s deployment last month of a seismic research vessel, the Oruc Reis, and an accompanying fleet of warships in disputed waters near the Greek island of Kastellorizo.

Turkish officials ended the month-long mission and ordered the vessel back to shore last weekend for maintenance and replenishment.

Erdogan also signalled Oruc Reis would return to its work, while also saying its withdrawal was deliberate.

“If we pulled Oruc Reis back to the port for maintenance, it has a meaning,” he said.

“It means: ‘Let’s give a chance to diplomacy, let’s show a positive approach.'”

Greek Foreign Minister Nikos Dendias in Prague on Friday said Greece believed “a dialogue should start and that international law should not be violated. Of course in this area nobody should try to prevail by force”.

He added Greece was “always open to a dialogue with Turkey as regards coastal waters in the exclusive economic zone, provided that Turkey stops its provocative acts in the area”.

Turkey’s Yavuz drillship, meanwhile, will continue its search for oil and gas off Cyprus until October 12 despite international calls to withdraw.

Ankara’s dispute with Athens has sparked a crisis that has drawn in some European Union member states, particularly France which sent navy vessels and fighter jets to the region in support of Greece.

EU leaders are due to discuss possible sanctions against Ankara at their meeting on September 24-25.