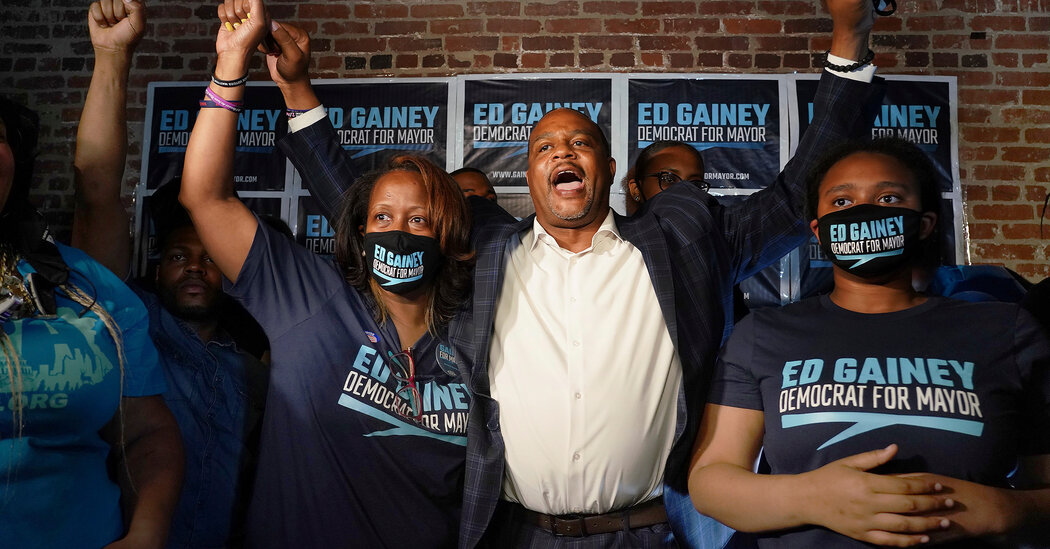 PITTSBURGH — Ed Gainey, a five-term Pennsylvania state representative, is poised to become the first Black mayor of Pittsburgh, having won the Democratic primary for mayor on Tuesday night by defeating a two-term incumbent on a campaign of unequivocal progressivism.

“A city is changed when we all come together to improve the quality of life for everybody,” Mr. Gainey told his supporters, sounding a theme he has focused on for months. “That’s why I ran for mayor, because I believe we can have a city for all.”

In a city that is roughly a quarter Black, Mr. Gainey won 46 percent of the vote. The incumbent, Bill Peduto, an outspoken liberal with a national profile, trailed with 39 percent, the first Pittsburgh mayor to lose a bid to stay in office since 1933. There is no declared Republican candidate for the general election in November.

Though Pittsburgh routinely shows up on various lists as one of the country’s “most livable” cities, the mayoral campaign was fought largely around one short question: Livable for whom?

Mr. Gainey’s thoughts on that question were not drastically different from Mr. Peduto’s; both talked of addressing racial inequities and building more affordable housing. But Mr. Gainey, who is less known for his profile in the legislature than for his easy and avuncular rapport with constituents, pointed out that Mr. Peduto had already had two terms to do these things, and said he had fallen short.

When Mr. Peduto won the mayor’s office in 2013, talking aggressively of fighting climate change and pursuing criminal justice reform, he also emphasized the continued reinvention of Pittsburgh, once Steel City, into a tech and health care town. But highlighting the presence of companies like Google and Uber, as well as the hometown medical giant, UPMC, made Pittsburgh’s disparities appear harsher in contrast.

Nearly 7,000 Black people left the city from 2014 to 2018, leading to a broad debate about whether rapid gentrification might be driving the exodus. A city-commissioned report found that, on certain metrics, including employment rates and maternal health, Black people in Pittsburgh, and Black women in particular, had a lower quality of life than Black people in nearly all U.S. cities. Pittsburgh police officers, who are overwhelmingly white, have been routinely found to arrest Black residents at starkly disproportionate rates.

As inequities like these were drawing scrutiny, George Floyd was killed in Minneapolis and a summer of protest broke out. The protests in Pittsburgh were mostly peaceful, but the police cracked down hard on several occasions, firing tear gas and projectiles and at one point forcibly pulling one man into an unmarked van. The protests became in part about the police tactics in response, and on several nights demonstrators crowded in front of Mr. Peduto’s house demanding his resignation.

As with many mayors who were in office in 2020, Mr. Peduto’s attempts to respond to the concerns of protesters but also support the city’s police proved an unwieldy political task. Indeed, local measures banning no-knock warrants and restricting the use of solitary confinement passed by overwhelming margins.

In his concession speech, Mr. Peduto called Mr. Gainey’s win “a historic night for the city of Pittsburgh,” and pledged to support him.

Western Pennsylvania may be synonymous with Trump Country to many, but Pittsburgh has been an electric hub for grass-roots progressivism. Activists have campaigned for races from the White House to the school board, battling for Republican-held legislative seats in the outer-ring suburbs and ousting establishment Democrats in upsets around Allegheny County.

In 2018, Summer Lee and Sara Innamorato, both first-time candidates endorsed by the Democratic Socialists of America, won state legislative seats, beating older male incumbents with dynastic Democratic roots. Two years later, Ms. Lee, the first Black woman to represent a southwestern Pennsylvania district in the legislature, faced coordinated opposition from old-line Pittsburgh Democrats when she ran for re-election — and she won by an even bigger margin.

Many of these new, avowedly progressive political figures backed Mr. Gainey’s campaign, seeing him as a better fit for an electorate impatient for change.

“You’re not going to find anyone who says Pittsburgh is perfect just the way it is,” said Bethany Hallam, an Allegheny county councilor who was first elected last year. This, she said, “does not spell good news for incumbents who created the landscape we live in.”