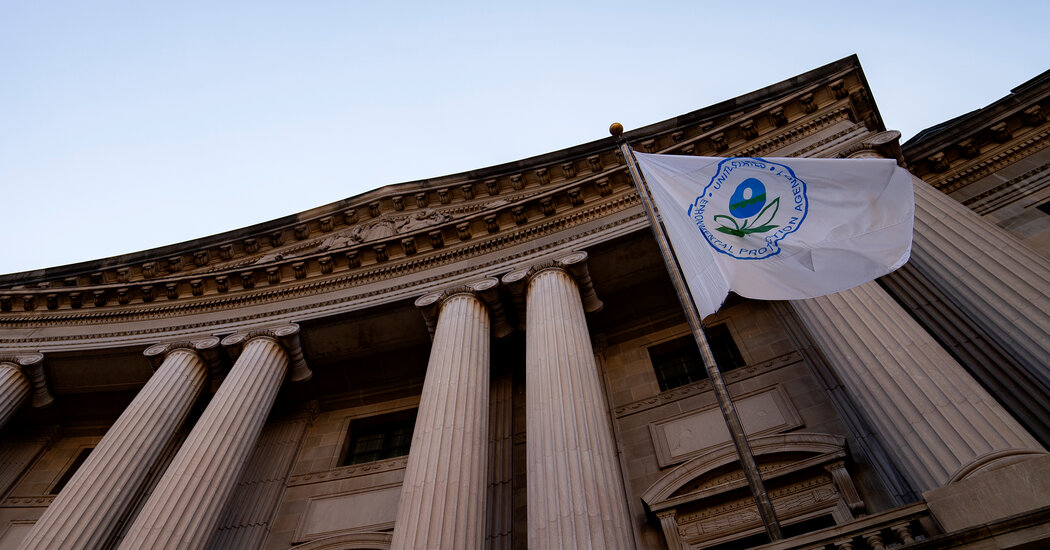 WASHINGTON — The Biden administration on Thursday said it would uphold a Trump-era decision and not impose limits in drinking water of perchlorate, a contaminant that has been linked to brain damage in infants.

The announcement from the Environmental Protection Agency shocked public health advocates who had denounced the Trump administration in 2020 for opting not to regulate perchlorate. The chemical is a component in rocket fuel, ammunition and explosives. Exposure can damage the development of fetuses and children and cause a measurable decrease in I.Q. in newborns.

The Trump administration had found that perchlorate did not meet the criteria for regulation because it did not appear in drinking water “with a frequency and at levels of public health concern.” Activists at the time accused the E.P.A. of disregarding science.

After President Biden took office, the agency launched a review of the decision and on Thursday endorsed it, saying it was “supported by the best available peer-reviewed science.”

The E.P.A. said it would take other action, like setting up new monitoring tools and doing more to clean up contaminated sites, “to ensure that public health is protected from perchlorate in drinking water.”

In a statement, the agency said it will “continue to consider new information on the health effects and occurrence of perchlorate.” The E.P.A. said its decision does not affect any state standards for the chemical. California and Massachusetts, for example, have set their own limits for perchlorate in drinking water.

“We are extremely disappointed and think that it’s unscientific and unlawful to not regulate this contaminant that’s in millions of people’s drinking water,” he said. “They’re not following the best science.”

Perchlorate can occur naturally, but high concentrations have been found in at least 26 states, often near military installations where it has been used as an additive in rocket fuel, making propellants more reliable. Research has shown that by interfering with the thyroid gland’s iodine uptake, perchlorate can stunt the production of hormones essential to the development of fetuses, infants and children.

“Today’s decision by E.P.A. that perchlorate does not merit additional federal regulation is based on the best available scientific information, ensures protection of public health and the environment, and assures access to clean water,” Mr. Romanelli wrote in a statement.

He called perchlorate “one of the most well-studied environmental chemicals E.P.A. has ever evaluated.” He said peer-reviewed studies have found that the chemical does not occur with a frequency and at a level in public water systems to cause concern.

Deadly combination. Global warming is greatly increasing the risk that extreme wildfires in the American West will be followed by heavy rainfall, a new study has found, highlighting the need to be prepared for mudslides and flash floods after the flames from severe blazes are out.

Ice shelf collapses. For the first time since satellites began observing Antarctica nearly half a century ago, an ice shelf has collapsed on the eastern part of the continent. The 450-square-mile ice shelf was located in an area known as Wilkes Land; the loss occurred in mid-March.

Australia’s Great Barrier Reef. A wide stretch of the Great Barrier Reef has been hit by a sixth mass bleaching event, an alarming indicator that the area is under intense stress from the waters around them, which have been growing steadily warmer as a result of climate change..

The battle over perchlorate dates back to the early 2000s, when the administration of President George W. Bush decided not to regulate it.

The Obama administration reversed that decision, issuing a finding in 2011 that perchlorate in drinking water posed a serious health risk for as many as 16 million people in the United States. It issued a recommendation to states that 15 micrograms per liter is the highest concentration of perchlorate in water that the most sensitive populations, like pregnant women, should ingest.

But the Defense Department and military contractors such as Lockheed Martin and Northrop Grumman waged aggressive efforts to block the controls, and the fight dragged on.

The Trump administration in 2020 reversed the Obama decision and additionally overturned the health finding, saying it was “not in the public interest” to regulate the contaminant.

Environmental groups sued the E.P.A. over the decision not to regulate, but suspended their lawsuit after President Biden was inaugurated in 2021.

The American Academy of Pediatrics, which had told the agency that perchlorate can cause a significant drop in the I.Q. of newborns and urged the “strongest possible” limits on the contaminant, declined to comment on Thursday.

Mr. Olson said the litigation against the E.P.A. will now restart with the goal of compelling the agency to impose standards for perchlorate.