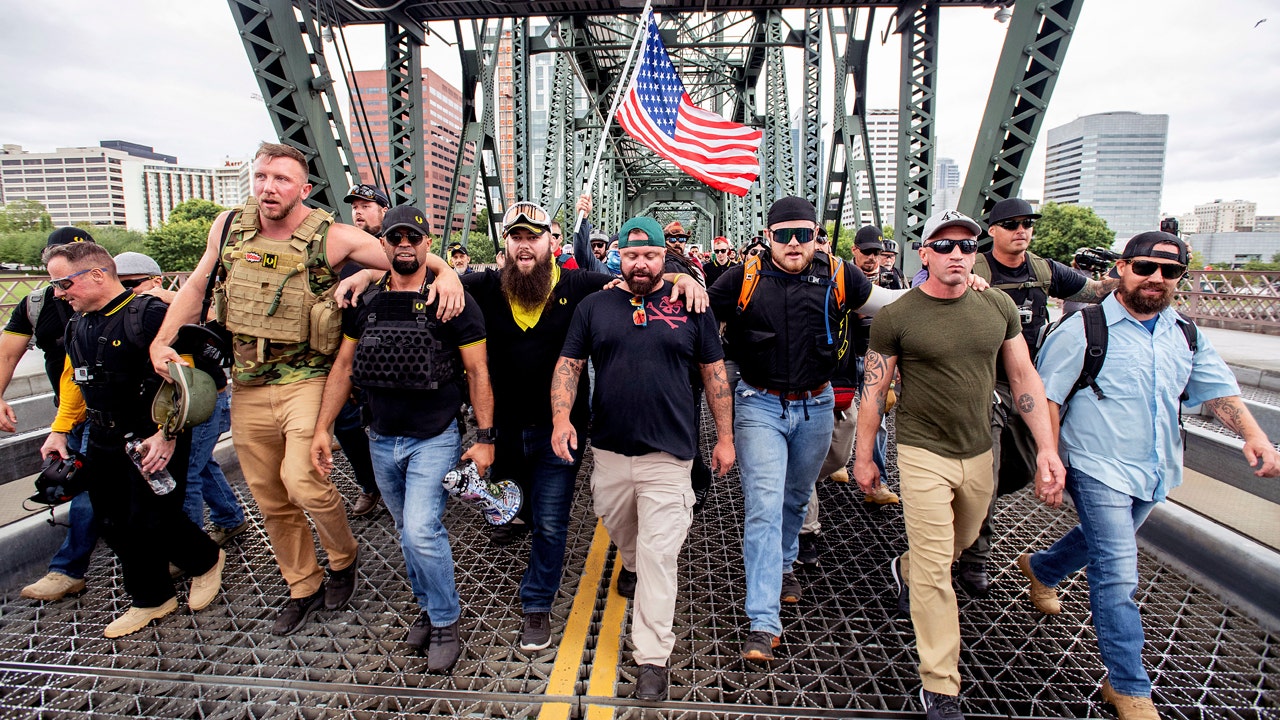 A far-right group planned a “No to Marxism in America” rally at the Terry Schrunk Plaza near the courthouse at noon, following a Black Lives Matter (BLM) counterprotest scheduled to start at 11:30 a.m.

Another event called the “Mother of All Back The Blue Rallies,” a pro-police protest, also was planned at noon.

Extremist groups like the Proud Boys, a far-right neo-fascist organization that is openly chauvinistic, racist and xenophobic, and Antifa, an anti-fascist group were present for today’s rallies.

Portland Mayor Ted Wheeler tweeted a warning to all of the day’s protesters telling them to “peacefully exercise their First Amendments Rights.”

But violent skirmishes broke out around the city anyway as people attacked each other with pepper spray, paintball guns, bats, shields and projectiles. Streets were blocked, and police monitored the situation near the Multnomah County Justice Center.

One protester filming the day’s events, caught a woman on camera who was punched to the ground by a member of the Proud Boys group.

Police made public announcements on Twitter throughout the day telling protesters: “Anyone who is involved in criminal behavior is subject to arrest and/or citation. Criminal conduct may also subject you to the use of force, including, but not limited to, crowd control agents and impact weapons. Stop participating in criminal behavior.”

Police officers also confiscated a bucket of condoms filled with an unknown liquid, and water bottles full of what was believed to be urine, near the protests.

Demonstrations reportedly started out peacefully in front of the courthouse, but turned violent within an hour of pro-Trump supporters showing up.

“We are investigating criminal acts when we are aware of them and ask for any victims to come forward so we can build the best case we can for enhanced outcomes for prosecution,” Chief Chuck Lovell said Saturday in a statement.

A pro-police demonstrator was filmed pointing a paintball gun at close range at a counterprotester.

Protesters from both sides engaged in violent behavior and fights broke out, forcing the police to disperse the crowds.

“Crowd management events are complex, especially when they involve groups with differing ideologies with members who wish to engage in physical confrontations,” Lovell said.

“PPB had to be judicious with our limited resources today especially since many of our members worked during the riot this morning and had very little sleep.”

The PPB announced on Twitter, “Federal officials have declared an unlawful assembly in Terri Schrunk Plaza. The crowd is being ordered to disperse to the North or be subject to force, arrest, or crowd control munitions.”

The PPB chose not to engage the protesters until absolutely necessary, allowing them to fight it out, it told Fox News in a statement.

“In this case there were hundreds of individuals and many weapons within the groups and an extremely limited amount of police resources actually available to address such a crowd,” the PPB said, adding that it did not offically declare it a riot, because it does not have the police resources to handle those repercussions.

“Additionally, PPB members have been the focus of over 80 days of violent actions directed at the police, which is a major consideration for determining if police resources are necessary to interject between two groups with individuals who appear to be willingly engaging in physical confrontations for short durations.”

The FBI had announced earlier this week, that it received a bomb threat, forcing federal buildings in the area to close.

“If we develop information indicating a credible threat, we will notify the public,” the FBI said in a statement to the Associated Press Friday night.

Portland has seen more than months of protests since the death of George Floyd in May.

President Trump has been highly critical of the protests, blaming the Democratic Portland leadership for the continued demonstrations.