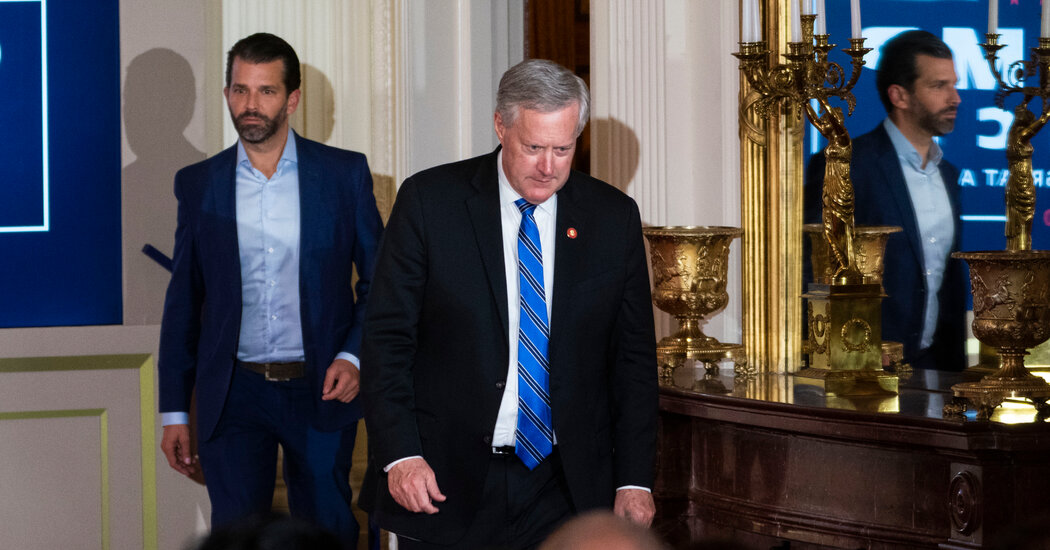 Former President Donald J. Trump’s eldest son sent the White House chief of staff a text message two days after Election Day in 2020 that laid out strategies for declaring his father the winner regardless of the electoral outcome, people familiar with the exchange said on Friday.

The text, which was reported earlier by CNN, was sent two days before Joseph R. Biden Jr. was declared the winner of the election. The recipient, Mark Meadows, turned a cache of his text messages over to the House committee investigating the events leading up to the deadly riot at the Capitol on Jan. 6, 2021, as the Electoral College results in Mr. Biden’s favor were being certified.

“It’s very simple,” Donald Trump Jr. wrote to Mr. Meadows on Nov. 5, 2020. He wrote at another point, “We have multiple paths We control them all.”

The message went on to lay out a variety of options that Mr. Trump or his allies ultimately employed in trying to overturn the results of the election, from legal challenges to promoting alternative slates of electors to focusing efforts on the statutory date of Jan. 6 for certification of the Electoral College results.

In a statement, the younger Mr. Trump’s lawyer, Alan Futerfas, confirmed that the text message was sent but suggested it was someone else’s idea that Donald Trump Jr. was passing along.

“After the election, Don received numerous messages from supporters and others,” Mr. Futerfas said. “Given the date, this message likely originated from someone else and was forwarded.”

Still, the text message underscores the extraordinary lengths that Mr. Trump’s allies and official aides were already exploring right after Election Day to keep Mr. Trump in power if the voters throughout the country failed to do so.

Donald Trump Jr. and his brother Eric called on Republicans to keep fighting on their father’s behalf in the immediate aftermath of Election Day, as votes were still being counted in a string of close races in battleground states like Pennsylvania and Arizona.

“The total lack of action from virtually all of the ‘2024 GOP hopefuls’ is pretty amazing,” Donald Jr. wrote on Twitter the same day he sent the text to Mr. Meadows. “They have a perfect platform to show that they’re willing & able to fight but they will cower to the media mob instead. Don’t worry @realDonaldTrump will fight & they can watch as usual!”

The House committee is investigating what led to the assault on the Capitol and the various efforts to try to thwart Mr. Biden’s victory, all of which failed. Ultimately, a mob of supporters of Mr. Trump stormed the Capitol during the certification. At least seven people died in connection with the riot.

Mr. Trump and a number of his advisers pressured Vice President Mike Pence to use his ceremonial role in the Electoral College certification to upend the process, something Mr. Pence was adamant was beyond his authority.

The text message that Donald Trump Jr. sent to Mr. Meadows acknowledged that scenario, which was championed by a lawyer advising President Trump, John C. Eastman. “We either have a vote WE control and WE win OR it gets kicked to Congress 6 January 2021,” the text message said.

The younger Mr. Trump also texted with Mr. Meadows during the riot, urging him to move the president to act as the violence played out.