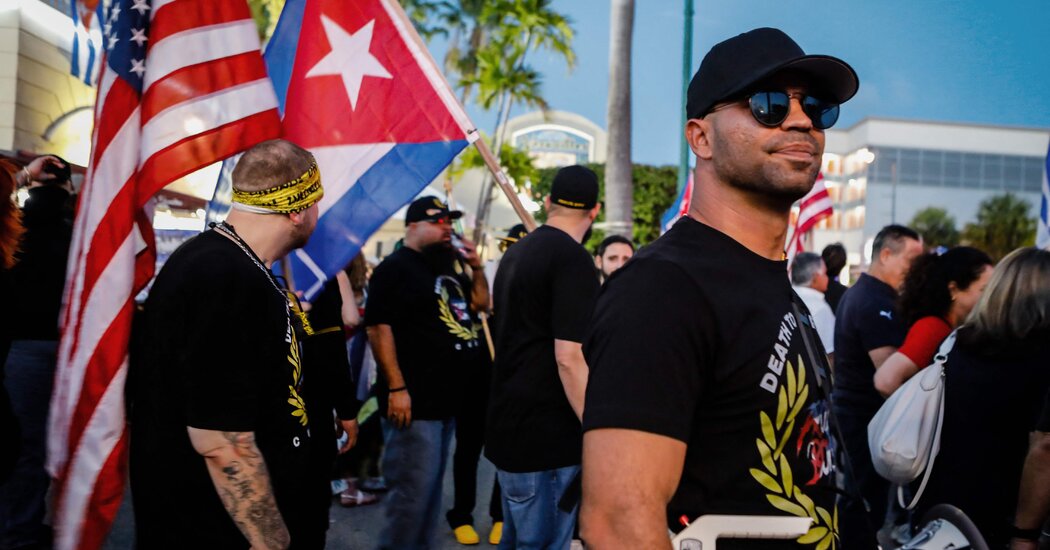 The document also makes suggestions for the days leading up to Jan. 6, the people said, advising protesters to “scope out” road closures near the seven target buildings. On the morning of the protest, they added, the document suggests having “scouts” drive around the buildings to look for “roadblocks.”

While much of the document is marked for “internal” use, the people said, it contains a section, known as the “Patriot Plan,” that appears to have been meant for public distribution. This part of the document suggests that crowds begin to gather at the seven buildings at 1 p.m. on Jan. 6, the people familiar with it said. Thirty minutes later, the public part of the plan calls for the crowds to await a “signal from lead” and then to “storm” the buildings.

The indictment of Mr. Tarrio, who recently stepped down as chairman of the Proud Boys, was a significant development in the Justice Department’s sprawling investigation of the Capitol attack and the second time in recent months that charges had been brought against a leader of an extremist group that played a prominent role in the assault.

In January, prosecutors indicted Stewart Rhodes, the leader of the Oath Keepers militia, with seditious conspiracy for what the government has described as a plot to violently disrupt the work of Congress.

All together, more than 30 Proud Boys have been charged so far in connection with the attack, and many more took part in it but have not been charged. Members of the group, who have long served as vocal — and often violent — advocates for Mr. Trump, were instrumental in several key moments in the riot, including one at the Capitol’s security perimeter that resulted in the first breach of the barricades.

Prosecutors are still investigating the group. In court papers filed last week, they said they had recently carried out search warrants at the homes in North Carolina and central Pennsylvania of two top members of the group. Those members were later identified as Jeremy Bertino and John C. Stewart, according to people familiar with the matter.

Unlike many of his subordinates, Mr. Tarrio was not in Washington on Jan. 6, having been arrested two days earlier for vandalizing a Black Lives Matter banner at a Black church in the city after a pro-Trump rally in December 2020 that spiraled into violence after nightfall. Charged with a second crime — the possession of two high-capacity rifle magazines — he was ordered to leave Washington by a local judge as part of his release agreement.