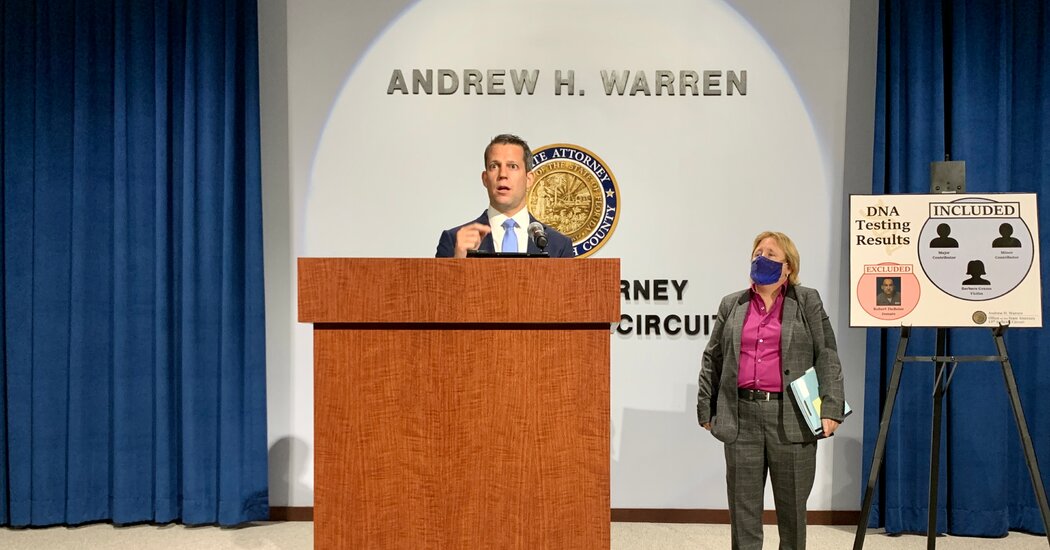 Robert DuBoise, 55, has spent two-thirds of his life behind bars for the 1983 rape and killing of a woman in Tampa, Fla. He has always maintained his innocence, but any hope of reversing his conviction seemed to evaporate in 1990 when the evidence from his trial was destroyed as part of a routine procedure.

Earlier this month, however, a prosecutor in Hillsborough County, Fla., made a startling discovery: The county medical examiner’s office had preserved rape kit samples in the case that were not used in Mr. DuBoise’s trial.

DNA testing of the samples confirmed what Mr. DuBoise had long said: that he was not responsible for the rape and murder of the woman, Barbara Grams, 19, prosecutors said.

On Wednesday, prosecutors said they had moved to free Mr. DuBoise by filing a joint motion with his lawyer to reduce his life sentence to time served. If a judge approves the motion on Thursday, Mr. DuBoise could walk out of Hardee Correctional Institution in Bowling Green, Fla., on Thursday afternoon, after 37 years behind bars.

Prosecutors and Mr. DuBoise’s lawyer said they would then begin the lengthier process of asking the court to reverse his conviction and exonerate him.

“We’ve had an innocent man locked up for a crime that he did not commit, while the real perpetrator was never held accountable for this horrific murder,” Andrew H. Warren, the Hillsborough County state attorney, said at a news conference on Wednesday. “The family of the victim deserves to have the truth, and this new evidence helps reveal the truth for all of us.”

Mr. Warren said he had apologized to Mr. DuBoise “on behalf of the entire criminal justice system.”

“The only person who benefits from wrongful conviction is the actual perpetrator,” Mr. Warren said. “Wrongful convictions tear at the very foundation of our system and everything that prosecutors stand for: public safety, fairness and justice. Knowing that such an egregious mistake could happen here is gut-wrenching.”

The DNA testing, prosecutors said, had identified two other men. One of them who was a major contributor of DNA on the samples — meaning more of his genetic material was present — is now considered a “person of interest” in the killing of Ms. Grams, who was found raped and beaten to death behind a Tampa dental office in 1983.

Prosecutors declined to reveal the person’s identity but said he “poses no threat to public safety.”

Susan Friedman, an Innocence Project lawyer who represents Mr. DuBoise, said she told him on Monday that he had been cleared by DNA testing and was going to be set free.

“Robert has always maintained his innocence and he has fought for decades to prove that he was wrongfully convicted,” she said. “So when he heard the news he was thrilled, but his reaction was, ‘It’s like waking up from a nightmare.’”

Ms. Grams’s family could not immediately be reached for comment on Wednesday. The Hillsborough County prosecutor’s office said Ms. Grams’s family had “been extremely understanding, but they are not prepared to make any public comments right now.”

Mr. DuBoise was arrested in connection with Ms. Grams’s killing when he was 18. At his trial, in 1985, prosecutors said that Mr. DuBoise, his brother and a friend had been driving in Tampa when they saw Ms. Grams walking down the street, abducted her and raped and killed her.

To prove their case, prosecutors presented testimony from a local dentist who concluded that an injury on Ms. Grams’s cheek was a bite mark, as well as testimony from a dental expert who said that Mr. DuBoise had inflicted the bite.

A jailhouse informant also testified that Mr. DuBoise had confessed to killing and raping Ms. Grams along with his brother and friend. The brother and friend were never charged because there was no other evidence against them, prosecutors said.

A jury convicted Mr. DuBoise of first-degree murder and attempted sexual battery in 1985, and a judge sentenced him to death. In 1988, the Florida Supreme Court changed the sentence to life in prison.

In 2007, Mr. DuBoise filed a motion to have DNA from his case tested, but the evidence admitted at his trial had been destroyed in 1990, and Mr. DuBoise’s motion was denied, prosecutors said.

Then, last September, the Innocence Project asked Mr. Warren’s office, which had created a Conviction Review Unit in 2018, to examine Mr. DuBoise’s case.

A review by the unit and the Innocence Project found that the injury on Ms. Gram’s cheek was not a bite mark and that the jailhouse informant who testified against Mr. DuBoise was not credible, prosecutors said.

Mr. Warren said that the scientific community, including the National Academy of Sciences, had rejected the type of bite-mark analysis used in Mr. DuBoise’s case. The expert who testified that it was Mr. DuBoise’s bite has since renounced similar evidence in other cases, Mr. Warren said. And a dental expert cited by the Innocence Project found that the injury on Ms. Grams’s cheek was not a bite mark at all, Mr. Warren said.

The Innocence Project also discovered “significant inconsistencies” in the jailhouse informant’s testimony, and his sentence was reduced after he cooperated with investigators, Mr. Warren’s office said.

The DNA test results further discredited the informant because the results did not match Mr. DuBoise, his brother or his friend, whom the informant had implicated in the crime, Mr. Warren said.

“In short, there is not one shred of evidence that says that Robert DuBoise committed this crime,” Mr. Warren said, “and the DNA evidence compellingly points to his innocence.”

Ms. Friedman said that she along with Mr. DuBoise’s mother and sister planned to meet Mr. DuBoise after he is released from prison on Thursday. Mr. DuBoise’s father died while he was incarcerated, she said.

Mr. DuBoise is “a man of faith,” Ms. Friedman said, and hoped to go to church and the beach after his release.

“Robert is a very patient person,” Ms. Friedman said. “He always believed that the truth would come to light.”