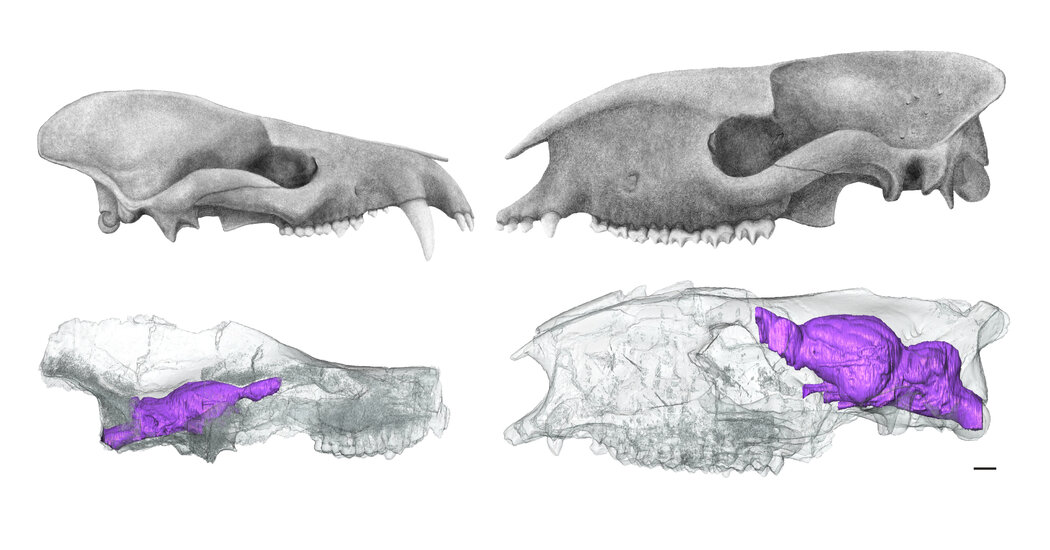 Mammals are the brainiacs of the animal world. The brain of the sperm whale is the largest on Earth, at a hefty 20 pounds, while your three-pound brain is seven times as large as expected for the average human body. Collectively, mammals have the largest ratio of brain to body size among vertebrates, a fact that helps to explain their cognitive ability. Bigger brains are often better at coordinating complex behavior, solving puzzles and responding to environmental change.

However, a study published Thursday in the journal Science reveals that mammals were not always so bright. During the Paleocene Epoch, a chaotic chapter of Earth’s history that began after the cataclysmic asteroid strike 66 million years ago that doomed the dinosaurs, our ancestors appear to have prioritized brawn over brains. But it might have been the smart evolutionary strategy of the time, giving animals the strength to survive and thrive in a difficult environment.

To track how brain sizes fluctuated, a team of paleontologists used CT scans to peer inside fossilized skulls recently unearthed in New Mexico and Colorado.

“Paleocene mammals are so weird,” Ornella Bertrand, a postdoctoral researcher at the University of Edinburgh and an author of the study, said.

These included Arctocyon primaevus, a fanged predator that resembled a souped-up hyena but is actually most closely related to modern sheep and pigs; and Hyrachyus modestus, a stocky relative of rhinoceroses and tapirs, from the later Eocene Epoch.

These strange mammals were not particularly brainy. The researchers used the CT scans to measure their braincases and compared them with the expected brain size for an animal of that size and evolutionary history. They found that during the Paleocene period, mammals’ relative brain sizes actually decreased, challenging the long-held assumption that mammals have always possessed relatively big brains.

But that tells only half of the story, because the brains themselves were not shrinking. Instead, mammals were becoming much larger during the post-dinosaur period. As many ballooned to record sizes, their brains struggled to keep pace.

This growth spurt was millions of years in the making. When dinosaurs dominated terrestrial ecosystems, the largest mammals topped out at the size of a badger. Although diverse, these pint-size mammals burrowed underground, perched high in trees and scurried underfoot.

But once the smoldering fallout from the asteroid impact cleared, these ecological bit players took center stage.

“They had to navigate a destroyed world,” said Stephen Brusatte, a paleontologist at the University of Edinburgh and an author of the study. “These were the animals that literally took over from the dinosaurs, the ones moving into niches once held by Triceratops and raptor dinosaurs.”

With the non-avian dinosaurs gone, mammals had full access to a leafy buffet and began tacking on mass. But as they quickly bulked up, the size of the brains in their growing skulls only gradually increased.

This trend of mass over intellect makes sense because a large, specialized brain does not come cheap, Xiaoming Wang, a paleontologist at the Natural History Museum of Los Angeles County, said.

“Our brain is like a supercomputer and consumes a huge amount of energy,” said Dr. Wang, who was not involved in the new study. “So the idea is that you do not increase the size of the brain unless you absolutely have to.”

And it appears that in the aftermath of extinction, a large brain was not worth the cost. Although these ancient mammals were most likely duller than their modern equivalents, they dominated recovering ecosystems.

However, the reign of dimwitted mammals would not last. In the subsequent Eocene Epoch, roughly 10 million years after the asteroid struck, ecosystems became crowded with large mammals. Resources were no longer readily available, meaning creatures now had to be clever in order to eat or avoid being eaten and smarter mammals could outcompete their smaller-brained brethren.

Although brain size in general has since increased, bigger brains are not all created equal. Dr. Bertrand and her colleagues found that as competition became stiffer in the Eocene period, some mammals’ brains became more specialized, growing in regions associated with vision, balance and eye movement.

Among the mammals that possessed well-developed brains were the ancestors who led up to modern horses, whales, bats and eventually, Homo sapiens.

“There’s definitely something special about our ancestors,” Dr. Bertrand said.