Did President Trump Violate the Hatch Act at the R.N.C.? 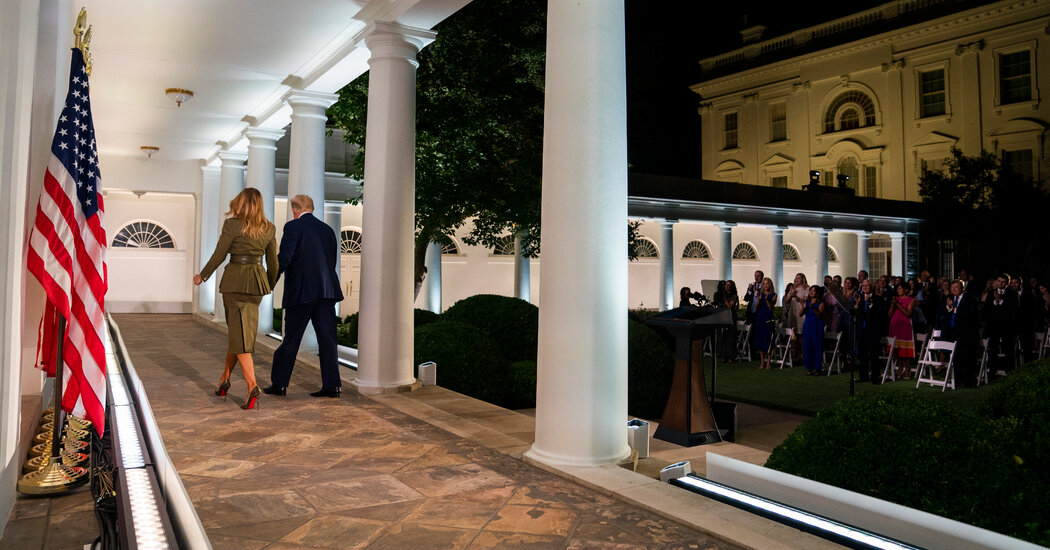 No modern president has accepted his party’s nomination for re-election from the White House.

But amid the coronavirus pandemic, which has forced a near-total reimagining of how to carry out a presidential campaign, President Trump plans to do just that on Thursday, when he will deliver his acceptance speech to the Republican National Convention from the South Lawn of the White House.

The speech is expected to be the last of several repeated violations over the course of the convention of the Hatch Act, a Depression-era law devised to ensure that the federal work force operates free of political influence or coercion.

Here is what you need to know about the Hatch Act and why it has drawn so much attention during the Republican National Convention.

What is the Hatch Act?

The Hatch Act prohibits federal employees from engaging in political activities while they are working in an official capacity. Named for former Senator Carl A. Hatch, Democrat of New Mexico, the law has been on the books for 81 years.

The Hatch Act also bars civil servants from running for political office or using their titles while participating in political activities.

Critics have questioned whether any aspect of Mr. Trump’s convention speech at the White House can be televised without help from federal workers, and they have said that several violations of the law occurred over the course of the convention this week.

Melania Trump, the first lady, delivered her convention remarks from the White House Rose Garden on Tuesday. Secretary of State Mike Pompeo addressed the convention from Israel, while on an official diplomatic trip to the Middle East and North Africa. And Mr. Trump and other officials took part in a naturalization ceremony and a presidential pardon as the convention cameras rolled.

Judd Deere, a White House spokesman, said on Monday that the staff members aiding Mr. Trump would be careful to abide by the law. While the restrictions do not apply to the president himself, any staff members assisting with the speech are likely to be doing so in violation of the act.

Who enforces the Hatch Act?

The law is enforced by the Office of Special Counsel, an independent agency that enforces Civil Service laws governing federal employees.

While violation of the Hatch Act was intended to be a fireable offense, that outcome has been exceedingly rare in modern politics. By most legal interpretations, the president is the only person who can terminate political appointees for violating the law.

For most other career officials, violations are reviewed by the United States Merit Systems Protection Board. Though the board can prosecute and punish civil servants for violations, a finding by the Office of Special Counsel that a political appointee violated the Hatch Act would be left to the president.

Has the Trump administration previously violated the Hatch Act?

Events related to the Republican National Convention were not the first instances in which the administration has prompted accusations of Hatch Act violations.

The Office of Special Counsel in 2019 recommended the firing of Kellyanne Conway, Mr. Trump’s White House counselor, for repeated violations of the act. Ms. Conway announced she was stepping down on Sunday for unrelated reasons.

The office also determined that Dan Scavino Jr., the White House director of social media, violated the law in 2017 when he called on Twitter for the defeat of Representative Justin Amash, Republican of Michigan, who had been critical of Mr. Trump.

Previous administrations have barred cabinet members from making conventions speeches, citing the law. The Trump campaign flouted this norm by scheduling Mr. Pompeo to speak at the convention, making him the first of any modern sitting secretary of state to do so.

Have previous administrations run afoul of the Hatch Act?

The Office of Special Counsel has flagged numerous violations of the Hatch Act in previous administrations.

Kathleen Sebelius, the former secretary of health and human services, apologized in 2012 for comments before a gay rights group in which she expressed support for President Barack Obama’s re-election. Julián Castro, who ran for the 2020 Democratic presidential nomination, was accused of violating the law in 2016, when he was the housing secretary.

In 2011, the Office of Special Counsel found that members of President George W. Bush’s administration had routinely violated the law by aiding Republican congressional candidates.