DeVos to Be Investigated for Potential Violation of Ethics Law 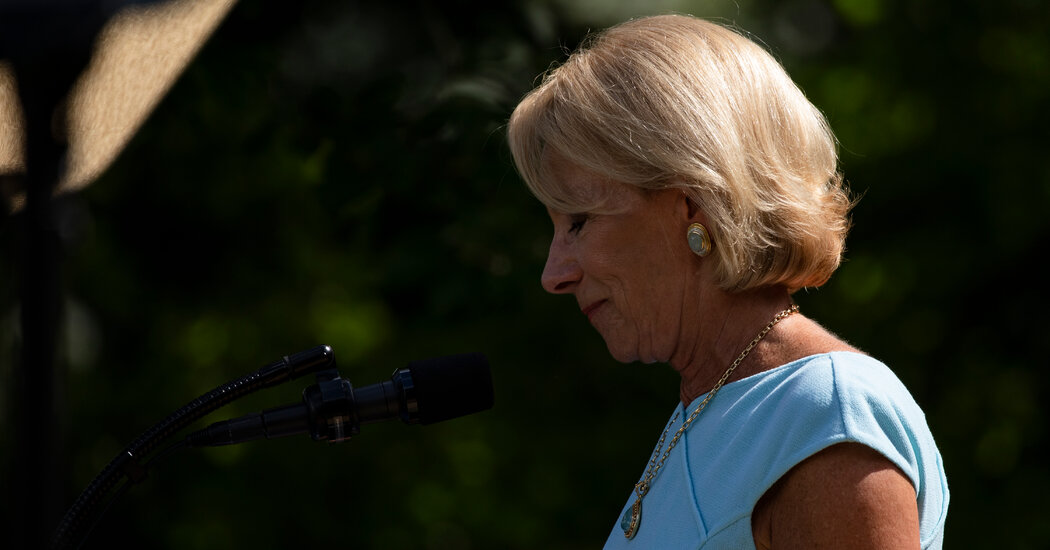 The U.S. Office of Special Counsel, which has jurisdiction to investigate violations of the law, known as the Hatch Act, will conduct the inquiry, according to the investigative watchdog blog that filed the complaint.

The revelation is the latest in a string of Trump administration officials to face accusations of breaching the government ethics law. But the power to levy penalties on officials like Ms. DeVos falls to President Trump, and he has shown little inclination to mete out punishment or follow the office’s recommendations.

The complaint stems from an appearance by Ms. DeVos on Fox News this month, when the secretary said Mr. Biden’s pledge to abandon her school-choice policies was “shameful.” She claimed that he had “turned his back on the kids” and “turned his face in favor of the teachers union” and its demands.

Shortly afterward, Education Department staff members distributed a link to the interview in an official email titled, “Important Updates from U.S. Department of Education Secretary Betsy DeVos,” via a government list, according to the complaint filed with the Office of Special Counsel. Ms. DeVos’s official Twitter account also posted the interview.

The watchdog blog, Checks and Balances Project, claimed that the remarks and dissemination of the video amounted to a “coordinated campaign, political attack” on Mr. Biden. It also constituted a violation of the Hatch Act, the group said.

Scott Peterson, the executive director of Checks and Balances Project, said that Eric Johnson, a lawyer in the Office of Special Counsel Hatch Act Unit, confirmed to him that the agency would investigate the complaint. Mr. Peterson added that, during a phone call, Mr. Johnson said the coronavirus pandemic might slow the investigation, which was reported earlier by Politico.

According to Mr. Peterson, Mr. Johnson told him: “We’ll investigate the matters in your complaint. The incident seems very well documented.”

Mr. Johnson did not immediately respond to a phone message seeking comment. The Education Department did not respond late Monday to a request for comment.

Among other provisions, the Hatch Act prevents an official from using “his official authority or influence for the purpose of interfering with or affecting the result of an election.”

But the Depression-era law has been largely ignored and even mocked by Trump administration officials. The Office of Special Counsel recommended in 2019 that Mr. Trump fire Kellyanne Conway, his White House counselor at the time, over repeated violations of the Hatch Act. But Mr. Trump declined to follow the guidance.

In an interview on Monday evening, Mr. Peterson said Ms. DeVos’s actions amounted to a “flagrant” violation of the act. He said the secretary should be held to the same standards as other federal employees who are punished for such violations.

“It’s not fair that ordinary folks have to comply with those rules, whereas people at the top who are wealthy or powerful don’t,” he said. “Aren’t we all supposed to play by the same rules?”