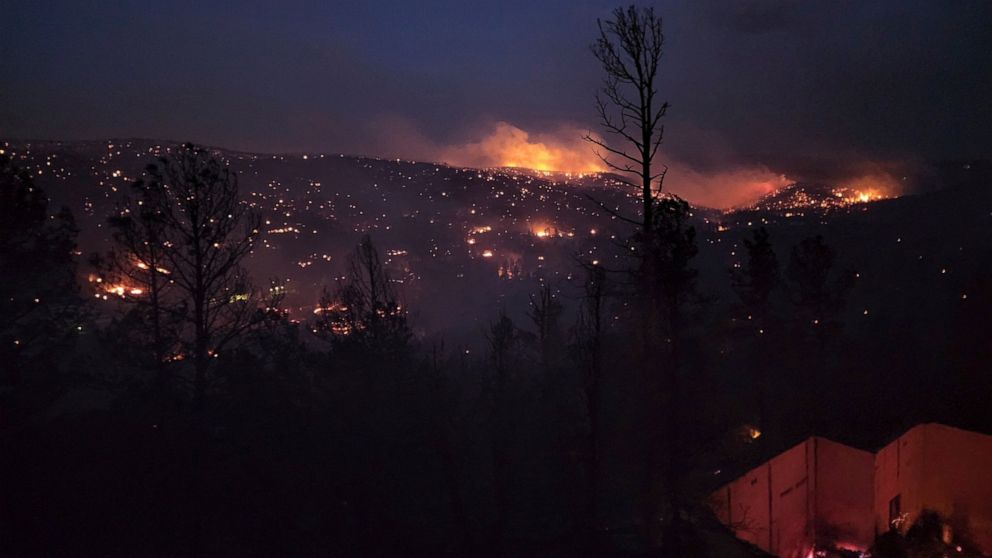 Firefighters scouted the drought-stricken mountainsides around a New Mexico village as they looked for opportunities to slow a wind-driven wildfire that was believed to have killed two people and that burned at least 150 homes and other structures while displacing thousands of residents.

Homes were among the structures that had burned, but officials on Wednesday did not have a count of how many were destroyed in the blaze that torched at least 8.4 square miles (21.8 square kilometers) of forest and grass on the east side of the community of Ruidoso, said Laura Rabon, spokesperson for the Lincoln National Forest.

Rabon announced emergency evacuations of a more densely populated area during a briefing Wednesday afternoon as the fire jumped a road. She told people to get in their cars and go.

An elderly couple whose remains were found near their burned home were believed to have died in the fire, Village spokesperson Kerry Gladden said Thursday.

Police investigators and firefighters found the couple’s remains Wednesday afternoon after family members notified Ruidoso police that the couple had tried to evacuate “but were unaccounted for by family members,” New Mexico State Police said in a statement Wednesday night.

The remains were found near the home but not in it, and no additional information was immediately available, Gladden said. Authorities were working to confirm the identities of the two people, state police said.

Strong winds initially forced a suspension of the aerial attack on the flames and prevented authorities from getting a better estimate of how large the fire had grown.

But some planes returned to the air Wednesday as winds subsided, and seven airtankers and two helicopters have now been assigned to the fire, Forest Service officials said.

While the cause of the blaze was under investigation, fire officials and forecasters warned that persistent dry and windy conditions had prompted red flag warnings for a wide swath that included almost all of New Mexico, half of Texas and parts of Colorado and the Midwest.

Five new large fires were reported Tuesday, and nearly 1,600 wildland firefighters and support personnel were assigned to large fires in the southwestern, southern and Rocky Mountain areas, according to the National Interagency Fire Center.

Hotter and drier weather weather coupled with decades of fire suppression have contributed to an increase in the number of acres burned by wildfires, fire scientists say. And the problem is exacerbated by a more than 20-year Western megadrought that studies link to human-caused climate change. The fire season has become year-round given changing conditions that include earlier snowmelt and rain coming later in the fall.

In Ruidoso, officials declared a state of emergency and said school classes were canceled Wednesday as the village — about 140 miles (225 kilometers) northeast of El Paso, Texas — coped with power outages due to down power lines. Students were evacuated a day earlier from two schools that did not burn.

The residences that burned were mostly a mix of trailers and single-family homes, and Gladden said authorities ordered or advised up to 4,500 people to evacuate as of early Thursday.

Gladden said authorities spent part of Wednesday surveying as much damage as possible before the winds kicked up again. Air tankers managed to drop a few loads of slurry in an effort to prevent the fire from spreading, and more air support was expected Thursday.

“Right now, everybody is just rallying around those who had to be evacuated,” Gladden said. “We’re just trying to reach out to make sure everyone has places to stay.”

Donations were pouring in from other communities in southern New Mexico. State officials said emergency grants have been approved that will provide resources to firefighters and for other emergency efforts.

Ruidoso in 2012 was hit by one of the most destructive wildfires in New Mexico history, when a lightning-sparked blaze destroyed more than 240 homes and burned nearly 70 square miles (181 square kilometers).

Rabon said Wednesday that no precipitation was in the forecast and humidity levels remained in the single digits, which would make stopping the flames more difficult.

“Those extremely dry conditions are not in our favor,” she said.

Another wildfire in the Lincoln National Forest northwest of Ruidoso burned at least 400 acres (1.6 square kilometers) after it was sparked Tuesday by power lines downed by high winds. Crews confirmed Wednesday that 10 structures there were lost.

Elsewhere in New Mexico, wildfires were burning along the Rio Grande south of Albuquerque, in mountains northwest of the community of Las Vegas and in grasslands along the Pecos River near the town of Roswell.