Despite Ample Shots and Incentives, Vaccine Rates Lag Far Behind in the South 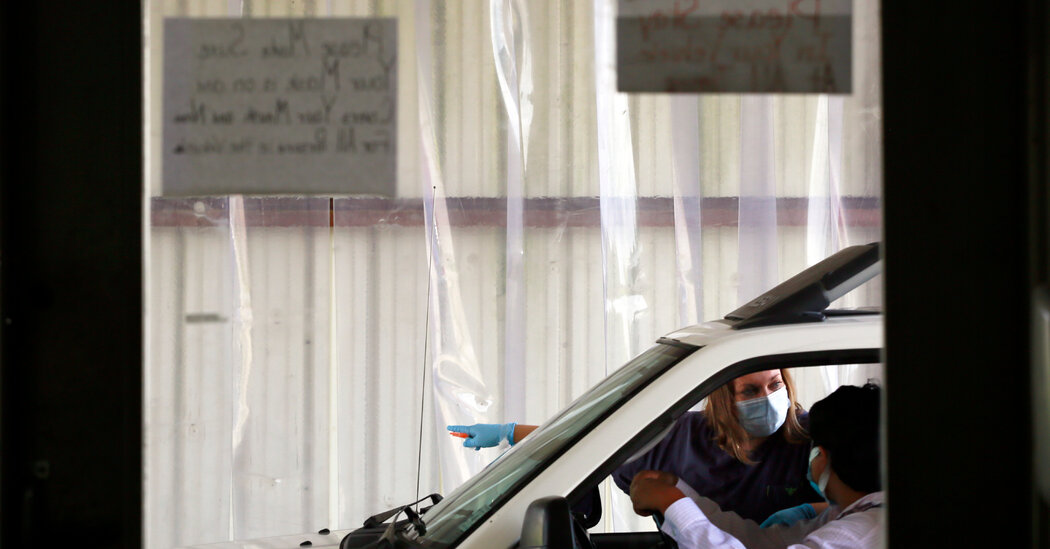 NASHVILLE — Public health departments have held vaccine clinics at churches. They have organized rides to clinics. Gone door to door. Even offered a spin around a NASCAR track for anyone willing to get a shot.

Still, the country’s vaccination campaign is sputtering, especially in the South, where there are far more doses than people who will take them.

As reports of new Covid-19 cases and deaths plummet, and as many Americans venture out mask-free into something approaching normalcy, the slowdown in vaccinations presents a new risk. As coronavirus variants spread and restrictions are eased, experts fear that the virus could eventually surge again in states like Alabama, Louisiana and Mississippi, where fewer than half of adults have started the vaccination process.

“A lot of people have the sense, ‘Oh, dodged that bullet,’” said Dr. Jeanne Marrazzo, the director of the Division of Infectious Diseases at the University of Alabama at Birmingham. She added, “I don’t think people appreciate that if we let up on the vaccine efforts, we could be right back where we started.”

A range of theories has emerged about why the South, which as of Wednesday was home to eight of the 10 states with the lowest vaccination rates, lags behind the rest of the country: hesitancy from conservative white people, concerns among some Black residents, longstanding challenges when it comes to health care access and transportation.

The answer, interviews across the region revealed, was all of the above.

“It’s kind of a complex brew, and we’re teasing apart the individual pieces,” said Dr. W. Mark Horne, president of the Mississippi State Medical Association. He added: “There’s no magic bullet. There’s no perfect solution. There’s no pixie dust we can sprinkle on it.”

Vaccines, once a scarce commodity, are now widely available in the United States, and everyone age 12 and older is eligible for a shot. But daily vaccinations nationwide are down to about 1.1 million doses from a peak of more than 3.3 million doses a day in mid-April.

Thirteen states, mostly in the Northeast and on the West Coast, have already given vaccines to at least 70 percent of adult residents, and several others remain on pace to do so in the coming weeks. Experts now believe that the United States may never reach herd immunity, the point at which the virus dies out, but Mr. Biden has said getting 70 percent of adults a shot by July 4 would constitute “a serious step toward a return to normal.”

But in parts of the South, it is uncertain whether that milestone is attainable anytime soon — or ever.

“I certainly don’t expect us to get to 70 percent by Fourth of July. I don’t know that we’ll get to 70 percent in Alabama,” said Dr. Karen Landers, Alabama’s assistant state health officer. “We just have a certain group of people, of all walks of life, that just aren’t going to get vaccinated.”

Time is of the essence, both to prevent new infections and to use the doses already distributed to states. With a three-month shelf life at refrigeration temperatures, millions of doses of the Johnson & Johnson vaccine are set to expire nationwide this month, prompting some governors to urgently plead that health providers use them soon.

As of Monday, more than 57,000 doses of the vaccine were set to expire this month in Arkansas, officials said. And in Tennessee, thousands of doses were sitting unused with looming expiration dates.

From rural Appalachian towns to urban centers like Memphis and Birmingham, Ala., the slowdown has forced officials to refine their pitches to skeptical residents. Among the latest offerings: mobile clinics, Facebook Live forums and free soccer tickets for those who get vaccinated.

In the small central Mississippi town of Forest, the Rev. Odee Akines implored congregants at his church to get vaccinated by sharing the story of his own nearly fatal brush with Covid, which included being hospitalized for 80 days and in a coma for roughly a month. In Alabama, Nick Saban, the championship-winning football coach, urged fans to get vaccinated so they could attend games safely this fall.

So far, there have been individual stories of success, but no major change in the trend. When Alabama officials set up a clinic at Talladega Superspeedway and let vaccine recipients drive around the famed track, about 100 people took them up on the offer. Dr. Landers said organizers had hoped for more people.

No single reason explains why the South’s vaccination campaign is faltering, which means that no one fix is likely to change the trend. Many common barriers to vaccination are not unique to the South, but are especially prevalent there.

Some Republicans distrust the government’s role in the development and promotion of the vaccines, polls show. Some Black people distrust the medical profession because of generations of discriminatory care and experiments. And others are busy, or biding their time, or unable to get to a vaccination site, or have unanswered questions.

Certainly, millions of Southerners have already been vaccinated, and the vaccination campaign around some large cities in the region, including Nashville and Charleston, S.C., has progressed far more quickly than in many rural areas. The vaccination rates in Virginia, Maryland, Delaware and Washington, D.C., have outpaced the national average.

But across much of the South, vaccine skepticism is pervasive. In Jackson, Miss., Felix Bell Sr., a warehouse supervisor, expressed concern about how quickly the vaccines were developed. He did not plan to get a shot.

“At first they said it’s going to take several years,” said Mr. Bell, who said he had previously recovered from Covid-19. “And then all of a sudden, it was ‘Boom.’” He added, “They’ve got to get more information about what happens down the line.”

The three vaccines granted emergency use authorization by the federal government have been shown to be safe and highly effective in preventing Covid-19. But Americans who were eager to get vaccinated already received their shots weeks ago. Now, health officials are trying new methods to convince the uninterested and the skeptical, and to keep case numbers down in the months ahead.

“My concern is the fall,” said Susanne Straif-Bourgeois, an epidemiologist at Louisiana State University Health in New Orleans. “Because then everyone goes back to school, to college, to universities.”

The national outlook has improved drastically in recent weeks. The country is averaging about 14,000 new cases a day, the fewest since testing became widely available, and deaths and hospitalizations have plummeted. Gov. Tate Reeves of Mississippi, a Republican, recently called Mr. Biden’s July 4 goal arbitrary, and said he was encouraged by the relatively low hospitalization and case numbers in his state, which has the country’s lowest vaccination rate.

But doctors have warned that the low vaccination numbers could make the South vulnerable to another wave of infections, a point that some are raising when pitching the vaccines to skeptical residents. Federal officials are especially worried about the highly transmissible Delta variant, first detected in India, which is increasingly prevalent in the United States. The Pfizer-BioNTech vaccine appeared to offer protection against the Delta variant, officials said.

“If we don’t get our numbers up, we could be where we were last year, sheltering in place,” said William Parker, the president of the Birmingham City Council, who has proposed spending millions of dollars on vaccine incentives and who answered questions about vaccines on Monday as part of an online forum for residents.

In the sparsely populated rural communities in the northeast corner of Tennessee, officials say they have struggled less with convincing people to be vaccinated than with getting the shots to people who lack time, transportation or knowledge about the process. In one community, two vans have been retrofitted into rolling mobile vaccination sites, dispatched to churches and workplaces aimed at intercepting people as they go about their days.

There are modest signs of progress. The first weekend the vans were in operation, about 40 doses were given. But at a recent event, about 135 people got shots.

“We’ve always been slightly behind the rest of the country when it comes to infrastructure,” said Mark Stevans, the director of special projects for the First Tennessee Development District, the agency overseeing the effort. “And I’d argue that the vaccine is a critical piece of infrastructure.”

Across the region, doctors and public health officials repeatedly cited two factors as making a difference with the hardest-to-reach people: easy access and a personalized pitch.

Dr. Kelly Rodney Arnold, the founder of Clínica Médicos, which treats underserved and uninsured people in Chattanooga, Tenn., said she knew that the trust she had built over years with her patients, many of whom are Latino, would be critical in overcoming skepticism.

The vaccines’ staggered rollout, she said, had allowed misinformation to spread and had complicated the campaign.