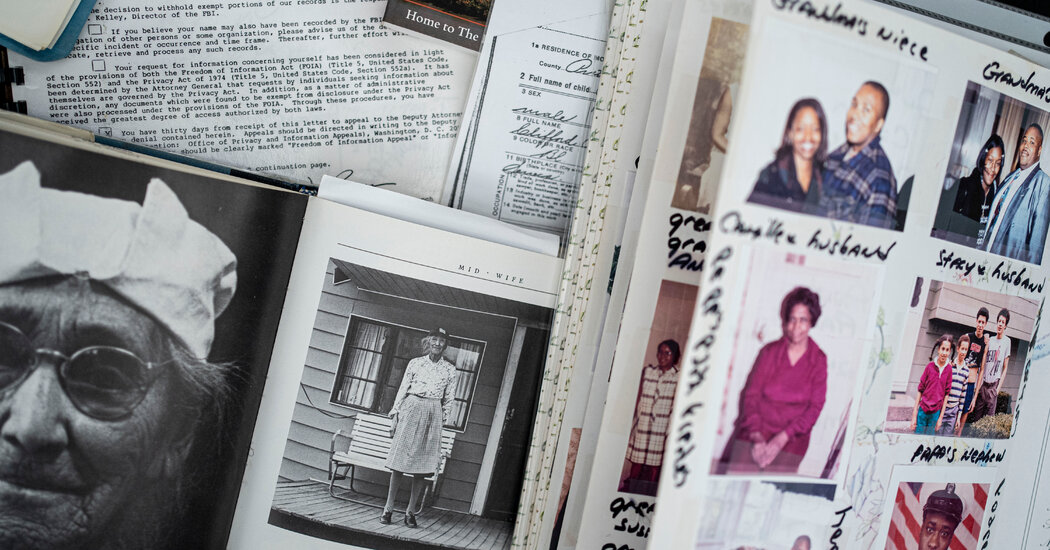 Each week, Sharon Morgan sits at her desk and consults property records, deeds and wills that draw a clear line from her computer in Noxubee County, Miss., to her ancestors who were enslaved at a nearby plantation.

Sometimes Ms. Morgan, 71, still has to climb a rickety ladder at the county courthouse to retrieve heavy books from the 1800s, but the internet and other technologies have increasingly transformed the hard work of reconstructing the past as she had practiced it for decades.

Handwritten government records from the aftermath of Emancipation are now available for free online. Distant relatives whose ancestors were forced apart by slavery can be reached with a few mouse clicks. And the descendants of people who profited from slavery are digitizing crucial records long buried in attics and basements.

Through grass-roots groups, private genealogy firms and social media, it has never been easier for the descendants of 19th-century Americans to find and confront their histories. At the same time, the education of American history and the legacy of slavery has become an increasingly political issue, with Republican-led legislatures in several states passing laws to limit what can be taught in schools.

As those arguments consume statehouses and school boards, descendants continue to unearth family histories, and in some cases meet each other.

“I think genealogy is a tool for being able to achieve healing, because we have to go back into the past,” Ms. Morgan said. “And when you reconnect those pieces that were corrupted because of slavery, that is a way forward.”

She created the group Our Black Ancestry to try to connect those pieces. The nonprofit serves as a forum for people to share documents, discuss reparations and trace histories together. Another organization, Speaking Truth, was launched in January by descendants of people who profited from slavery and who are now trying to acknowledge their family history and make amends.

Crowdsourcing the puzzle of family trees

Tracing family histories can be difficult for the descendants of enslaved people, because the most basic details about their lives, such as their names and birthdays, were typically recorded by the people who enslaved them. Key documents, such as wills or deeds, may be hidden in a book, government archives or the attic of someone whose ancestors enslaved people.

“As you’re putting together your family tree, it’s not just writing a name, a date, a place, it’s building out a person,” Ms. Morgan said. “You are re-humanizing people in a way.”

The discovery of family records that list men, women and children as property has motivated some descendants to try to make amends for what their ancestors did.

Rea Bennett’s great-great-grandfather owned 15 slaves. As part of a broader plan to atone for that history, she helped create Speaking Truth, which aims to catalog the family histories of descendants. Participants are also asked to share how they plan to act on that history. The archive will eventually be handed off to a museum or educational institution, Ms. Bennett, 80, said.

“I don’t want to leave this world without making restitution,” said Ms. Bennett, a retired university administrator. She said she and her sister may also try to find the descendants of the people their ancestor enslaved.

Speaking Truth is the latest of several online portals recently created by descendants to help them act on their family histories. In 2019, two descendants of enslaved people and of people who profited from slavery together launched the site Reparations 4 Slavery, which serves as a resource for family research, and in 2020 another pair formed The Reparations Project, which provides scholarships to students at historically Black colleges and universities as well as land grants to help prevent Black land loss.

Both groups were influenced by Coming to the Table, which since 2006 has brought together descendants to talk about their shared history. Tom DeWolf, the nonprofit’s co-manager and the descendant of a major slave-trading family, said there was a surge of interest in the group during the 2016 presidential election, when there were only 10 local chapters. Today, there are more than 50 local chapters in 18 states and the Virgin Islands.

One of the most established genealogy services, Ancestry, has made some of its records related to slavery free to users, and published video guides to help people search for documents.

Anne C. Bailey, a professor of history at the State University of New York at Binghamton, said personal histories and acts of reconciliation are important because they show what can be accomplished at a small scale, and underline what cannot be remedied by individuals alone.

Acknowledging a historic moment. In August 2019, The New York Times Magazine launched the 1619 Project, spearheaded by Nikole Hannah-Jones. The project explored the history of slavery in the United States and was released to coincide with the anniversary of a ship carrying the first enslaved Africans to the English colonies.

“You don’t need to feel guilty about something you didn’t do, but you can think this is an opportunity for me to help to even the playing field in the present,” she said.

Part of that work, in Professor Bailey’s view, is connecting personal actions to national efforts to provide reparations to recognize the atrocity of slavery, something the United States has not done in a widespread capacity. She said that other countries have tried to face the violence of their past, including South Africa’s Truth and Reconciliation Commission, created at the end of apartheid, and Germany’s decades-long process of acknowledging the Holocaust.

Those efforts have not erased racism or antisemitism, but they have established official records of what happened, a crucial step in addressing the present-day consequences of historical atrocities, Professor Bailey said. Her university’s Harriet Tubman Center for Freedom and Equity, where she is the director, launched its own truth and reconciliation forum in 2020.

“The truth-telling establishes a kind of common ground from which you can then start to rebuild your society,” she said.

Some genealogists offer even more individual projects. Olivia Dorsey is, at 30, relatively young for the field, which she grew interested in when she was around 11, searching online when adults did not want to take her to the courthouse archives.

Today, Ms. Dorsey, who is also a technologist, can turn to YouTube channels like BlackProGen Live for help, and connect with other young Black genealogists on social media. She also created a website, Digital Black History, to help people with research.

Ms. Dorsey, who has been able to trace her own family tree to the early 1800s, found her great-great-great-great-grandfather, Ruffin Stewart, listed in the 1840 census as a “free colored person.”

She said about half of her research is still done offline using books like “Foxfire 5,” a chronicle of Appalachian life published in 1979. The book features an interview with her great-great-grandmother, Minnie Carrie Ann McDonnell Stewart, who lived to 107. Ms. McDonnell Stewart spoke of several relatives, including her father, James Marion McDonnell, who she said had recalled being sold “on the block” as a child before he was freed and became a farmer and homeowner.

Ms. Dorsey said she was still “speechless” about that discovery, and she recognized how slavery’s “reverberations” continue to be felt in the present. But she added that there was power in acknowledging what her ancestors went through.

“There is a perseverance and resilience from my ancestors to say that slavery doesn’t define us and what we do,” she said. “All these terrible things have happened, but we’re still going to persevere, we’re still going to succeed, even though we’re starting further back than other people.”