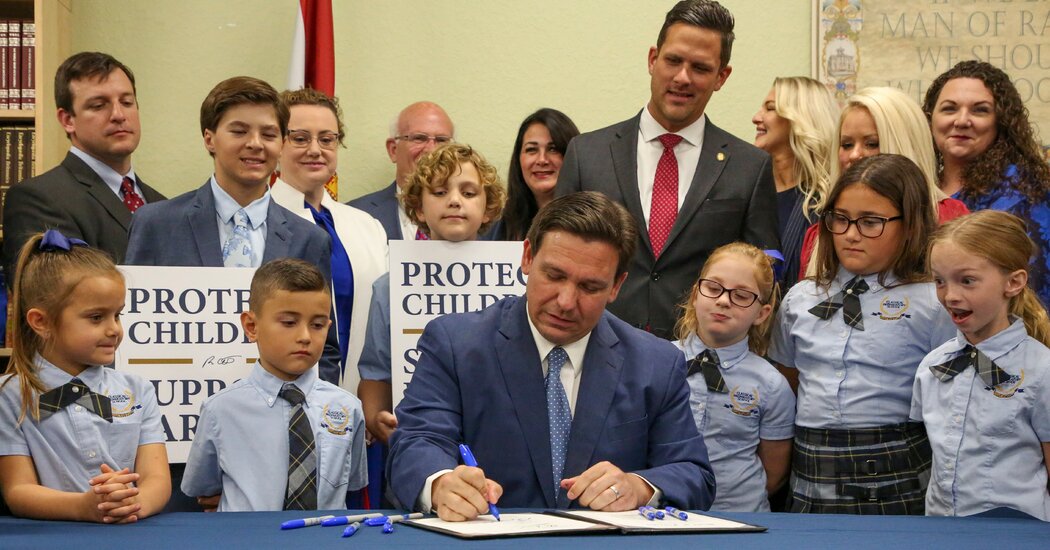 MIAMI — Gov. Ron DeSantis of Florida signed legislation on Monday that prohibits classroom instruction and discussion about sexual orientation and gender identity in some elementary school grades, a law that opponents have called “Don’t Say Gay.”

“We will make sure that parents can send their kids to school to get an education, not an indoctrination,” Mr. DeSantis, a Republican, said from a classroom at a charter school in Spring Hill, Fla., north of Tampa.

The law, titled “Parental Rights in Education,” has drawn national criticism from L.G.B.T.Q. organizations that fear it will have a chilling effect among teachers and young students.

Workers at Disney, one of the state’s major employers and corporate political donors, staged walkouts in protest after the bill passed the Legislature, even after the company’s chief executive had apologized to employees for not taking a stronger stand against the legislation and paused contributions to political campaigns. On Monday, Disney released a statement condemning the new law and urging lawmakers to repeal it or the courts to strike it down.

“DeSantis is attempting to censor and exclude an entire community of people from our public schools for his own political gain,” State Representative Carlos Guillermo Smith, an Orlando Democrat and the state’s first openly gay Latino lawmaker, said in a statement. “This law doesn’t solve any problem that exists.”

The uproar did little to move the governor or lawmakers in the Republican-controlled Legislature, who spent much of their annual session passing legislation to put Florida at the forefront of the nation’s culture wars, including a 15-week abortion ban, while avoiding pressing issues such as the state’s lack of affordable housing and shaky insurance market.

If anything, the opposition from progressive activists, corporate boardrooms and A-list stars made Mr. DeSantis, who faces re-election in November and clearly harbors presidential ambitions, more of a warrior figure to his political base.

He spoke behind a lectern with a campaign-style sign in front reading, “PROTECT CHILDREN SUPPORT PARENTS,” and held up posters showing what he said were examples of teaching materials found in some Florida schools, including an apparent page from a picture book about a transgender boy.

Mr. DeSantis argued that the law is a popular, common-sense measure limited in scope to the school curriculum. He blasted critics for what he said was willfully misinterpreting its provisions, though some of the language in the law is vague and subject to interpretation.

“They’re doing it because they actually support having woke gender ideology in the first grade,” the governor said.

The law could have far-reaching implications to children in other grades and without any connection to L.G.B.T.Q. issues. It will allow parents to opt out of counseling and mental health services and to sue school districts for any perceived violations. Districts will have to cover the costs of those lawsuits.