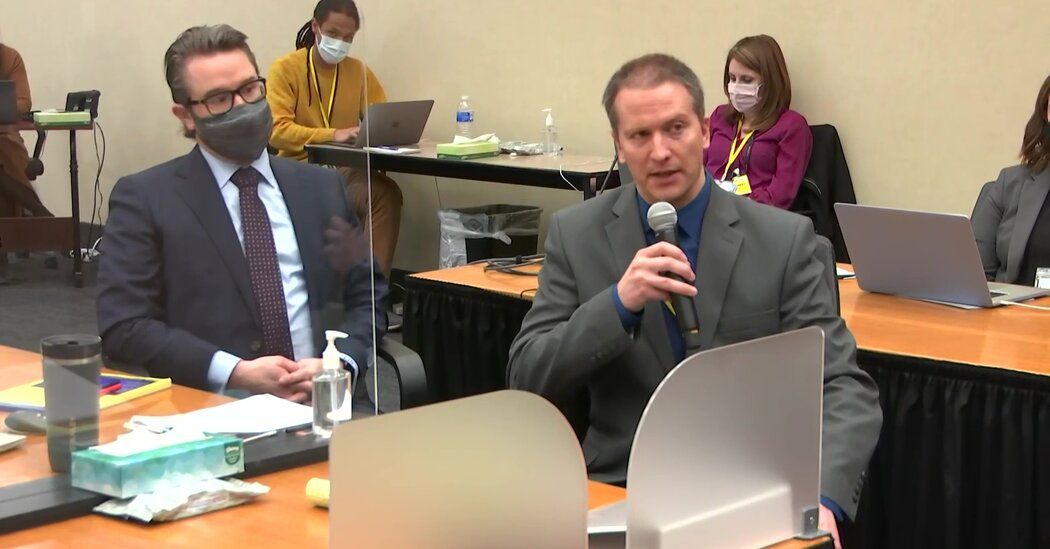 MINNEAPOLIS — He settled into a swiveling chair, sitting upright and a bit stiff, in a mostly empty courtroom.

Holding a microphone in front of his chest, Derek Chauvin removed a blue mask to reveal a clean-shaven face.

As his lawyer, Eric J. Nelson, asked a series of questions, Mr. Chauvin dipped his body toward the microphone and uttered the first words the public has heard from him in the more than 10 months since the death of George Floyd on May 25.

With that, the defense rested its case in the murder trial of Mr. Chauvin, a former police officer. After 13 days of testimony, the jury was offered no glimpse behind the impassive expression maintained by Mr. Chauvin, hands in his pockets and sunglasses on his head, as he knelt on the neck of Mr. Floyd on a South Minneapolis street for more than nine minutes.

The jury is expected to hear closing arguments on Monday and could deliver a verdict next week. The city is bracing for reaction from residents, including the potential for widespread unrest in the event that Mr. Chauvin is acquitted. The court plans to begin evacuating government buildings before the verdict is read.

Convictions of police officers for on-duty killings are exceedingly rare. But Mr. Nelson faced a daunting task given the harrowing video that showed Mr. Floyd, who was Black, pleading for his life, then losing consciousness under the knee of Mr. Chauvin, a white officer, as bystanders shouted out that he was dying.

“Let’s put it this way, Eric Nelson had one hell of a case to defend,” said Joe Friedberg, a prominent Minneapolis criminal defense lawyer.

It is common for the defense portion of a trial to be much shorter because the burden of proof is on the prosecution, and that proved to be the case here. Mr. Nelson presented seven witnesses in two days, compared with 38 for the prosecution over 11 days.

Mr. Nelson was stymied in some of his attempts to introduce evidence about Mr. Floyd’s use of fentanyl and methamphetamine.

One potential witness, Morries Lester Hall, an associate of Mr. Floyd’s who was in the car with him on the day of his death and may have sold him drugs, declined to testify on the grounds that he did not want to incriminate himself. On Thursday, Mr. Nelson said without explanation that he would not call a toxicologist who had been expected to testify.

Evidence that Mr. Nelson had wanted to present about a 2019 arrest of Mr. Floyd was strictly limited by the judge, Peter A. Cahill.

The judge repeatedly said that neither Mr. Floyd’s past actions nor his state of mind were relevant to the case.

Mr. Brodd, a former police officer, said that Mr. Chauvin’s actions were justified because Mr. Floyd was “actively resisting” while handcuffed and pinned facedown on the pavement. Mr. Brodd said a compliant person in that situation would have been “resting comfortably.”

He said a suspect under the influence of drugs does not feel pain, “may have an ability to go from compliant to extreme noncompliance in a heartbeat” and may exhibit “superhuman strength.” Mr. Brodd said he did not consider Mr. Chauvin’s keeping Mr. Floyd facedown to be a use of force.

But when he was cross-examined by Steve Schleicher, a prosecutor, Mr. Brodd acknowledged that the Minneapolis Police Department defines restraint as a use of force and that a reasonable officer follows department policy.

Dr. Fowler, the former chief medical examiner of Maryland, blamed Mr. Floyd’s heart disease, made worse by stress from the struggle with the officer, for causing a cardiac arrhythmia that led to his death, with other contributing factors including drug use and carbon monoxide exposure from the squad car’s tailpipe.

He said the weight of Mr. Chauvin’s knee was not enough to injure Mr. Floyd. There were so many factors, he said, that he would have classified the manner of death as “undetermined,” rather than homicide.

On cross-examination by Jerry W. Blackwell for the state, Dr. Fowler acknowledged that Mr. Floyd died “long, long before” he reached a hospital, that he could have been saved and that he should have been given immediate medical attention.

Much of the testimony has centered on disagreements over the cause of death and the fact that Mr. Floyd had heart disease, a large heart, high blood pressure and other medical conditions, and that he had been using fentanyl and methamphetamine.

Dr. Michael Freeman, a forensic epidemiologist on the faculty at Maastricht University in the Netherlands, said medical examiners were trained to list every possible cause of death, but not to acknowledge that some carried a vastly higher risk than others.

“You don’t need cardiopulmonary disease to explain why a man who was knelt on for four minutes died,” he said.

Throughout the trial, Mr. Nelson was the only lawyer to speak in court on behalf of Mr. Chauvin, compared with a parade of lawyers for the state. But behind the scenes there were several other lawyers working with him, including those representing three other officers charged in the killing of Mr. Floyd who are scheduled to go on trial in August.

Mr. Nelson dwelt on Mr. Floyd’s size and muscular build, telling the jury in his opening statement, “You will see that three Minneapolis police officers could not overcome the strength of Mr. Floyd.”

He repeatedly sought to portray the bystanders, who desperately tried to intervene, as a threatening mob that prevented Mr. Chauvin from doing his job properly. “You can’t paint me out to be angry,” one of those bystanders, Donald Williams, who is Black, objected while on the witness stand.

Mr. Nelson ensured that the jury repeatedly heard the words “superhuman strength,” though he presented no evidence that Mr. Floyd had displayed any.

A.L. Brown, a criminal defense lawyer in the Twin Cities, said the defense’s case tugged at many of the same racialized tropes in past cases where white police officers have been accused of killing Black men.

“The cartoonizing of Black American men as either super-sexy or super-dangerous needs to stop,” he said.

Throughout the trial, the jury heard from Mr. Chauvin only in the form of the many videos taken of the scene and its aftermath. In one, he tells a bystander: “We’ve got to control this guy because he’s a sizable guy. Looks like he’s probably on something.” He explains to his sergeant that Mr. Floyd was “going crazy.”

At one point, Mr. Floyd himself says, “You’re going to kill me, man.”

Mr. Chauvin responds, “Then stop talking, stop yelling, it takes a heck of a lot of oxygen to talk.”

Many officers who have been tried in on-duty killings have taken the stand in their own defense, with mixed results. But Mr. Brown said the decision by Mr. Chauvin not to testify “was a no-brainer.”

“He had nothing to offer that would help in terms of the relevant points,” he said. “He’s no expert in the field of medicine.”