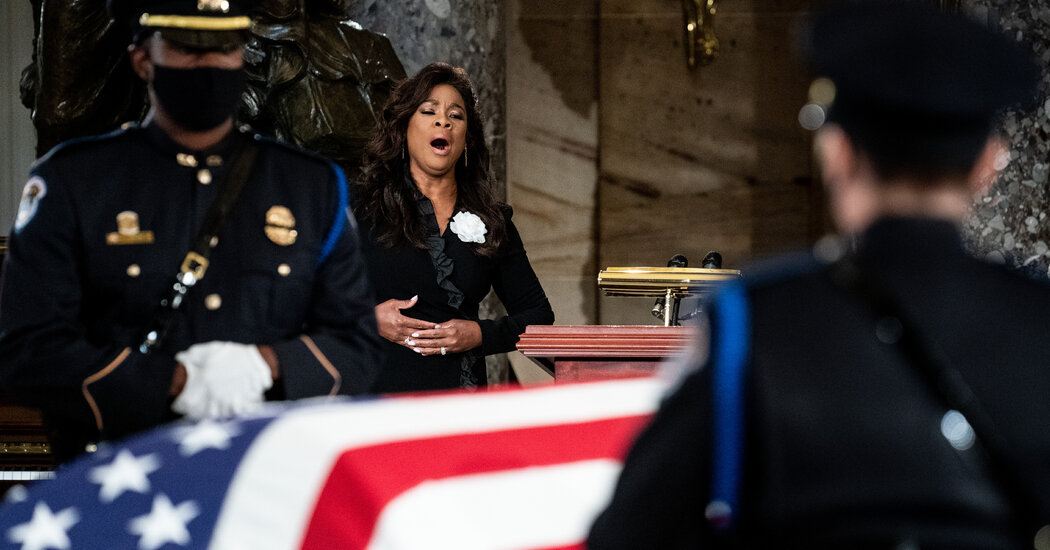 Justice Ginsburg was a passionate opera fan from her youth, and one of her favorite singers, the American mezzo-soprano Denyce Graves, sang for her one last time on Friday at the Capitol ceremony.

A Washington native, Ms. Graves, 56, became famous as a sultry Carmen in Bizet’s opera. She and Laura Ward, her piano accompanist on Friday, also performed at the funeral of Justice Ginsburg’s husband, Marty, in 2010.

After Justice Ginsburg saw her first opera — a condensed version of “La Gioconda” in 1944, when she was 11 — she was immediately hooked, becoming the kind of aficionado who went to dress rehearsals, then opening nights and then closing nights, too, for good measure.

It was a love she shared with Justice Antonin Scalia, her Supreme Court colleague, friend and ideological antagonist; an opera, “Scalia/Ginsburg,” was written in 2015 about their relationship. The two shared the stage on occasion as (silent) supernumeraries, though in 2016 Justice Ginsburg also had a turn in the speaking role of the Duchess of Krakenthorp in Donizetti’s “La Fille du Régiment” at Washington National Opera.

“She was our greatest advocate and our greatest spokesperson,” that company’s director, Francesca Zambello, told The New York Times. “She carried this art form.”