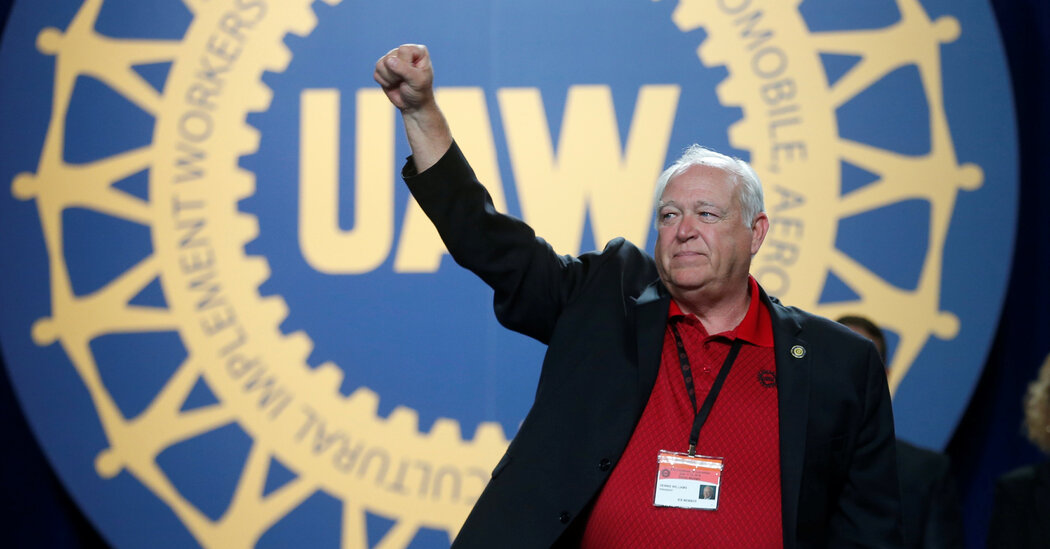 Federal prosecutors on Thursday charged a former president of the United Auto Workers union, Dennis Williams, with conspiring to embezzle union funds for personal expenses and luxury travel. He is the 15th person accused in a broad investigation into corruption at the union.

Mr. Williams, 67, the U.A.W. president from 2014 to 2018, used union money to pay for private villas in Palm Springs, Calif., expensive cigars, golfing apparel, greens fees at golf courses and lavish dinners, according to documents filed by prosecutors in federal court in Detroit.

The Justice Department contends that Mr. Williams conspired with his immediate successor, Gary Jones, who pleaded guilty to similar charges in June, and several other senior U.A.W. officials.

Matthew J. Schneider, the U.S. attorney for the Eastern District of Michigan, described the investigation as the largest of its kind into a labor union.

Lawyers for Mr. Williams did not respond to requests for comment. A person close to Mr. Williams previously denied to The New York Times some of the accusations against him.

The investigation has raised questions about whether the federal government would seek to take control of the U.A.W., as it did with unions like the International Brotherhood of Teamsters.

Mr. Schneider said he did not want to put the U.A.W. under federal supervision. “I don’t want to run the union. I want the men and women of the union to run it,” he said. “That said, all options are on the table.”

The investigation of the U.A.W. dates back to at least 2015 and has resulted in guilty pleas from at least 11 union officials and three former executives of Fiat Chrysler.

“Any violation of Mr. Williams’s oath of office and his responsibility to oversee our members and their sacred dues money should rightfully face criminal penalty,” the union’s current president, Rory Gamble, said in a statement. “Today’s development is a sad day for U.A.W. members.”

Mr. Gamble, who became president after Mr. Jones resigned in November, has changed financial practices and sought to increase cooperation with prosecutors.

Mr. Schneider praised the union’s new leadership for making changes and assisting his office in its investigation. “Our teams are working together and we’re having regular discussions, and they’ve been very positive,” he said.

Mr. Schneider added that he hoped the union would put needed reforms in place by the end of the year.

The union stopped paying Mr. Williams’s legal fees this year and had him pay back $56,000 for personal travel and housing that had been charged to the U.A.W. Last year, the union took back a luxury retirement home that it had built for Mr. Williams at a U.A.W. lakeside resort in northern Michigan.

Charges against prominent union leaders are rare. Before Mr. Jones was charged in March, the last major union president to be accused in a criminal case was Roy L. Williams, then the president of the International Brotherhood of Teamsters. He was indicted in 1981 and accused of conspiring to bribe a senator in an attempt to derail the deregulation of the trucking industry.

A few years earlier, Joseph P. Tonelli, a top A.F.L.-C.I.O. official who was also president of the United Paperworkers International Union, was charged with helping to embezzle $360,000 from the union. Both officials from that earlier era were convicted.

The U.A.W. investigation has turned on the cooperation of several top union officials. Under an agreement with federal prosecutors, Mr. Jones acknowledged using more than $1 million in union funds for vacation rentals, golf outings, clothing, liquor and expensive meals. According to prosecutors, Mr. Jones spent some $60,000 just on cigars and smoking paraphernalia.

The plea agreement indicated that a U.A.W. officer, whom court filings refer to as Official B, had urged using union money in ways that would benefit himself and other officials. Union officials have previously confirmed that Official B is Mr. Williams.

Spit in a Tube and Mail It In: A New Frontier in Covid Testing