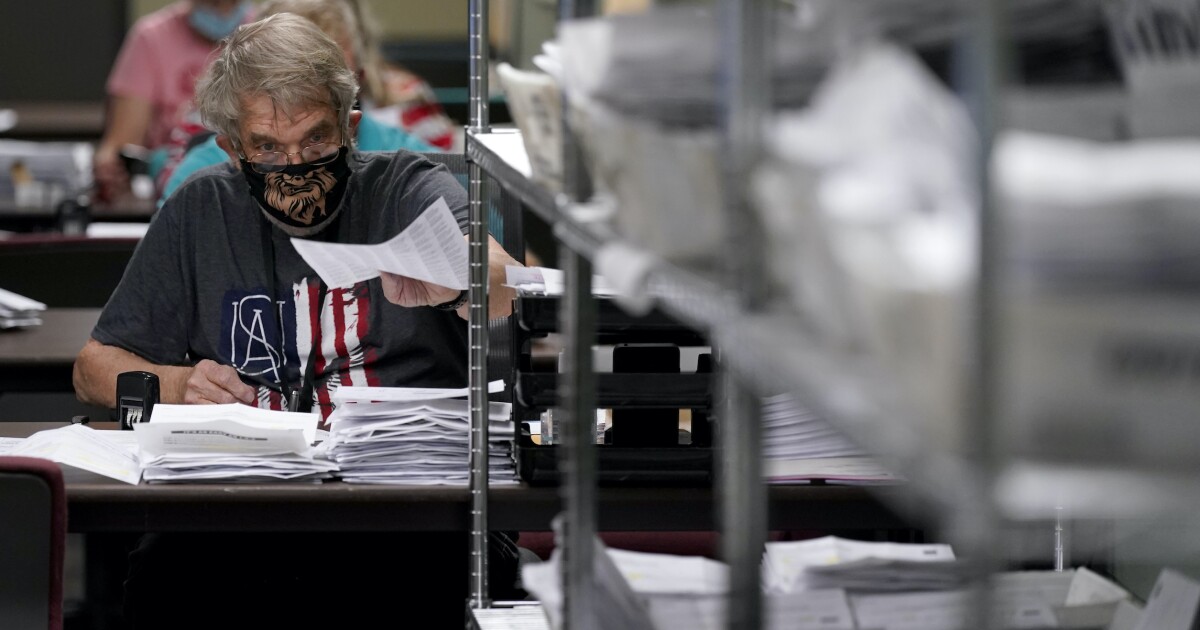 Democratic politicians and activist groups are pivoting away from encouraging mass mail-in voting as the safest and best way for voters to cast ballots in the November election.

The move away from mail-in absentee voting comes amid major liabilities in new mail-in voting systems that could jeopardize Democrats’ election chances in contests that are close.

“If you increase the share of first-time mail-in votes, you will also increase the number of disqualified ballots,” said Robert Stein, a political science professor at Rice University who is conducting research about mail-in absentee voting.

Poll after poll finds that Democrats are more likely than Republicans to say that they intend to vote by mail, suggesting that high rates of mail-in disqualification on masses of mail-in ballots could harm them.

A Pennsylvania Supreme Court ruling on “naked ballots” last week is the latest piece of news worrying Democrats. The court said that ballots not returned in a “secrecy envelope” can not be valid. The Democratic chairwoman of Philadelphia’s election board, Lisa Deeley, warned that up to 100,000 ballots could be affected. Trump won the state by about 44,000 votes.

Prominent Democrats, rather than posting that they completed and returned a mail-in ballot, are setting an example of voting in person despite the pushes for mass mail-in voting.

Democratic presidential nominee Joe Biden cast his general election ballot in person at an early voting location in Delaware earlier this month, and Virginia Sen. Mark Warner voted in person on the first day of early voting in his state. New York Rep. Alexandria Ocasio-Cortez said that she intends to vote early in person.

Two political action committees that previously pushed mail-in voting, Black PAC and The Collective PAC, are now turning attention away from the voting method and are encouraging in-person early voting.

Despite assurances from Postmaster General Louis DeJoy that the Postal Service is equipped to deliver masses of mail-in ballots on time, worries about mail delays and that President Trump could interfere in the service have also prompted some activists to discourage putting an absentee ballot in the mail.

Stein, the professor who is conducting research about mail-in absentee voting in Texas’s Harris County, said that he does not have direct evidence that Democratic voters’ fears about the post office are contributing to Democrats turning away from a mail-in method. But he has long noted that high rates of absentee ballot disqualification tend to affect the types of voters that Democrats rely on to win elections: minority voters, young voters, and those who vote sporadically.

Reports from the Election Assistance Commission show that states that do not have as much experience with mail-in voting have higher rates of absentee ballots being rejected.

For instance, Florida, which has long had a robust mail-in voting program, rejected 30,540 mail-in ballots in 2018, just over 1% of the total number of ballots returned. In Arizona, which also has had a large proportion of ballots returned by mail, the rejection rate was less than half a percentage point.

But in Pennsylvania, which did not implement a permanent mail-in voting-by-request program until 2019, voters were not as used to the system, and 4.45% of the mail-in ballots returned in 2018 were rejected. That accounted for 8,714 ballots. Trump won the state by 44,292 votes in 2016.

One of Stein’s surveys measured voter knowledge about how to return mail-in ballots properly.

“Over 55% of the people we surveyed who qualified for mail-in voting in our county did not know how to properly return and process a mail ballot,” he said.

In addition to Pennsylvania’s “naked ballot” problem, mistakes such as not using the same signature that election authorities have on file for a mail-in ballot, taking a ballot to the wrong place, or incorrectly marking a ballot can invalidate it.