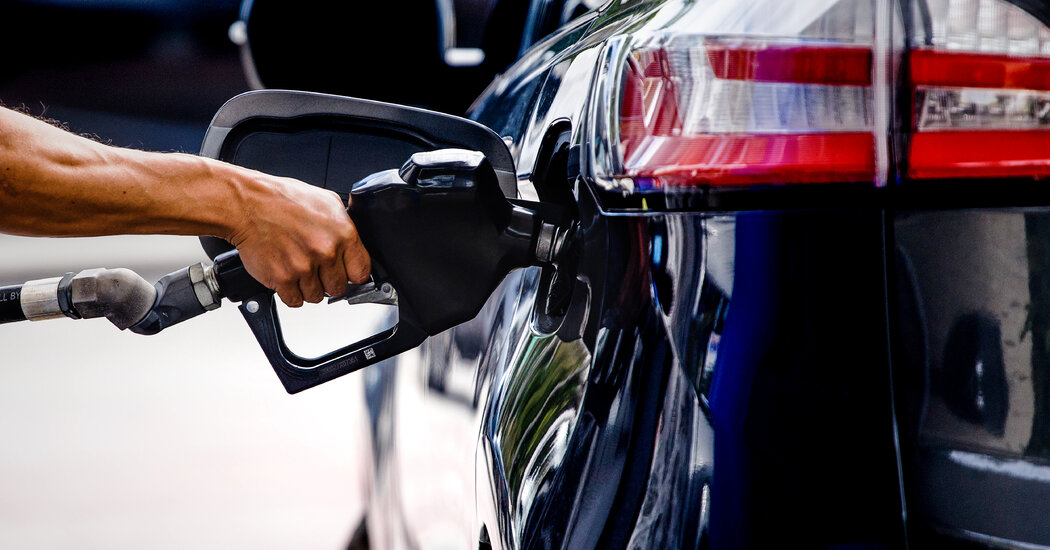 Democrats have a new strategy for dealing with the political impact of high gasoline prices: Blame it on Putin and Big Oil.

That’s the one-two punch that President Biden delivered from the White House on Tuesday as he announced a ban on imports of Russian energy.

First, there was the jab at the Russian president, Vladimir Putin: “Defending freedom is going to cost,” Biden said, while promising to ease the pain. “I’m going to do everything I can to minimize Putin’s price hike here at home.”

And then a second jab at oil companies: “Russia’s aggression is costing us all,” Biden said. “And it’s no time for profiteering or price gouging.”

Later, fielding a pair of shouted questions from Mike Memoli of NBC News, as he boarded Air Force One in Texas, Biden gave more succinct answers:

Memoli: Mr. President, do you have a message for the American people on gas prices?

Biden: They’re going to go up.

Memoli: What can you do about it?

Biden: Can’t do much right now. Russia is responsible.

Is this going to work? We asked about a dozen pollsters, political strategists and opinion experts, and got some interesting answers. They break down into roughly three camps:

Anderson has a point there: Democrats have struggled for months to fend off Republican attacks about high gas prices, which had been rising since April 2020 — well before the war in Ukraine. On Wednesday, the average price of gas was $4.25 a gallon across the United States, according to AAA.

“High gas prices tend to be quite damaging for consumer sentiment, because they are so salient, and in the short run, many people cannot really change the amount of driving they have to do,” said Carola Binder, an economist at Haverford College in Pennsylvania.

Gas prices are closely tied with inflation, which is increasing at a pace not seen in four decades.

That means it might be harder for Democrats to blame the war in Ukraine for, say, the rising prices of bacon or used cars.

The consensus of most of the pollsters and analysts we spoke with was that offering voters a target for their anger — Putin and his unprovoked war in Ukraine — was smart politics.

“Americans have been a bit lost as to who to blame for inflation, knowing that much of it has been the result of supply chain woes and labor shortages,” said Pollock, the Democratic consultant.

Putin and Russia get lousy approval ratings in the United States, noted Daniel Cox, a senior fellow in polling and public opinion at the American Enterprise Institute.

And that was before the war, which has seized the public’s attention with searing reports of atrocities by Russian forces and a steady flow of stories depicting Ukrainians as heroic freedom fighters standing up to a vicious foe.

As Binder put it, “Cutting off imports of Russian energy is so morally important that people will feel a little better about paying the higher price at the pump.”

Jonathan Kirshner, a political scientist at Boston University, said people are viscerally affected by what they are seeing in the news and on social media. “We have images of a war with mass suffering and with clear good guys and bad guys,” he said.

Yet we also heard a few notes of caution. Voters are paying close attention to the war in Ukraine — for now.

Jason McMann, the head of geopolitical risk analysis at Morning Consult, said his team was surprised to see 90 percent of voters express concern about the conflict. But if the war drags on and voters paying higher prices don’t perceive that their sacrifice is worth it, several pollsters said, the White House’s Putin price-hike message might backfire.

Republicans will also have their say, and voters will be listening to competing messages.

“Gas prices began rising sharply more than a year ago,” said Michael McAdams, a spokesman for the campaign arm of House Republicans. “Voters aren’t going to believe Democrats’ desperate attempt to shift blame for the disastrous results of their war on American energy.”

Mary Snow, a polling analyst at Quinnipiac University, pointed to a Feb. 16 poll indicating that inflation ranked as the “most urgent issue facing the country” among Republicans and independents — again, well before the invasion of Ukraine.

For that reason, she said, “blaming Vladimir Putin solely for higher gasoline prices could be a hard sell.”