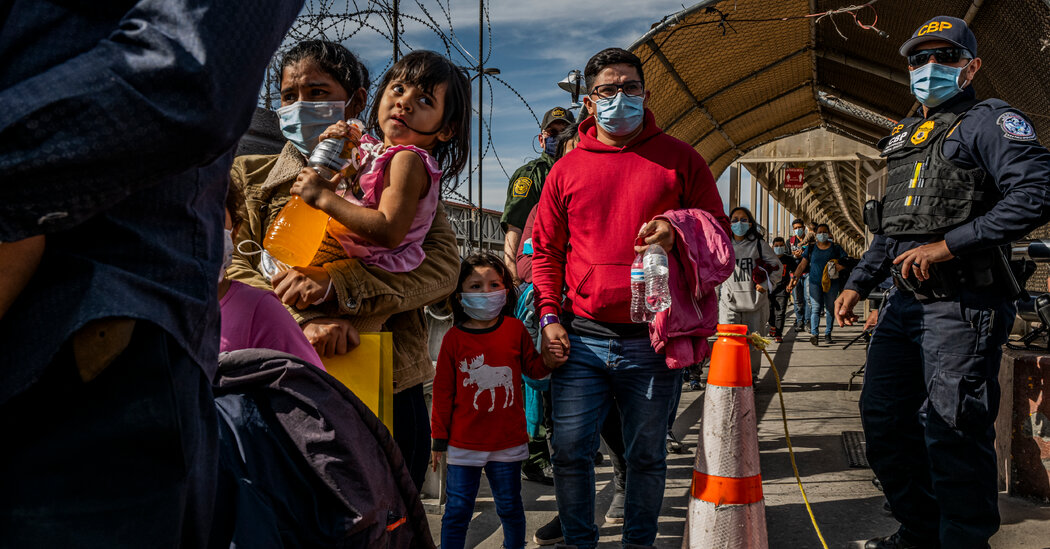 The Biden administration is grappling with the political fallout of the end of Title 42, a pandemic-era policy established during the Trump administration that turned away most migrants from the border. I spoke with Zolan Kanno-Youngs and Michael D. Shear, who reported recently on the administration’s divisions over immigration policy.

Our conversation has been edited for length and clarity.

LEAH ASKARINAM: Why don’t you start by telling us a little about Title 42. Why are we hearing so much about it right now?

ZOLAN KANNO-YOUNGS: Title 42 is a public health measure that the Trump administration — and I actually don’t think this gets talked about enough — tried to put in place before the pandemic in an effort to rapidly turn away migrants. We know it now as a border policy that the Biden administration has leaned on to turn away most asylum seekers.

MICHAEL D. SHEAR: Right — I think readers of The Times will remember that President Donald Trump and Stephen Miller, the architect of his immigration agenda, were always looking for ways to limit immigration.

And so they found this provision in the public health code that allowed them to say, “Let’s deny folks the chance to actually apply for asylum on public health grounds,” essentially to keep disease out of the country. They tried to put that in place before the pandemic and didn’t succeed, but when the pandemic came around, it was a pretty natural thing for them to try to use.

And there were a lot of immigration advocates who believed that, while there was clearly a pandemic, the real intentions behind the Trump administration putting it into place were really darker motives, intended to keep the migrants that Trump had criticized so harshly out of the country, and to use the public health rule as an excuse.

KANNO-YOUNGS: Biden often campaigned on breaking away from the Trump administration’s restrictionist border policies. This was one policy he didn’t mention as much during the campaign. The administration has relied on the policy up until this month, when it said it would lift it on May 23.

ASKARINAM: How is it enforced? It’s not an administrative action, right?

SHEAR: Title 42 is a big section of the U.S. Code that involves tens of thousands of pages of regulation and federal law. The relevant part of Title 42 is its public health section.

At some point, Congress passed a series of laws that essentially delegate to the director of the Centers for Disease Control and Prevention the ability to restrict entry into the U.S. when the agency’s director deems that a public health emergency would be made worse by letting people into the country.

Then the rest of the government, including Border Patrol officers, kicks in to enforce it. It’s a very broad power that has been used very few times.

KANNO-YOUNGS: For example, when I went to the border in 2019, a family of asylum seekers would step on U.S. soil, and Border Patrol agents would basically take them into custody. The family might be in a detention facility for days on end before they were eventually released into the country or transferred to Immigration and Customs Enforcement.

With Title 42, the government is essentially turning those folks away. Some might be questioned for a period, and it’s been debated how much they can plead their case for protection, but for the most part, they get turned away and go back south.

ASKARINAM: Both of you have reported on the life span of Title 42, breaking the original news that Trump was invoking it and writing about border politics under both Trump and Biden. What has it been like covering that trajectory?

SHEAR: It’s been a really interesting arc. If you go back to the beginning, there was an awful lot of suspicion about why the Trump administration was doing it. This was at the very beginning of the pandemic, and there were a lot of comparisons made to the early days of the Trump administration when he imposed the travel ban on people coming from several predominantly Muslim countries.

Fast-forward into the middle period, with Biden in office and the pandemic still raging, and there was more of a debate. A lot of people, including administration officials, took a second look at the Title 42 issue and said, “You know what, this isn’t crazy.” When you have the Delta variant and Omicron variant, it’s not crazy to think that you would have some restrictions keeping people out. Obviously there were dissenters, some who disagreed pretty strongly.

And now we’ve come full circle, to where the pandemic is maybe receding a bit and lots of people are vaccinated. People are asking again: How do you let people in from other places in the world but you keep the Title 42 rationale and say we’re not going to let in people who are crossing the border on foot?

KANNO-YOUNGS: Mike, I’m curious what you think. Was there any immigration policy that — if your measure of success is lowering border crossings and turning around asylum seekers — accomplished its goal more effectively than Title 42?

SHEAR: The thing about Title 42 is that it is the most blunt, all-or-nothing policy. Most other attempts by the Trump administration were complicated policy changes that had lots of legal mumbo-jumbo.

KANNO-YOUNGS: Which makes it even more confounding that the Biden administration embraced it. It is not necessarily surprising that a Democratic administration would lean into deterrence or restrictions. But it is surprising given how blunt this policy was, especially after months of Democrats criticizing the Trump administration for embracing policies that subjected migrants to violence, assault and kidnappings south of the border.

It’s also worth noting that Title 42’s ability to lower border crossings has received pushback. Migrants used to be detained for a prolonged period while they waited to ask for protection, but the use of this rule to rapidly turn them away had the unintended effect of providing them with more chances to cross the border illegally. Many migrants at the border in recent years have been repeat crossers.

You are seeing a real swing in momentum here, where it’s not just moderate Democrats but even someone like Beto O’Rourke, a leading critic of the Trump administration’s immigration policies, turning their attention on the Biden administration for a lack of preparation. It’s a political quagmire for Democrats.

ASKARINAM: So what does the story about Title 42 reveal about the challenges politicians face on immigration policy?

KANNO-YOUNGS: I think what Title 42 shows, and what Mike and I would hear from our sources, is that we knew what the Trump administration wanted when it came to the border: Kick people out, use deterrence to the max — even if it goes into cruelty — to keep people out of the country.

While the Trump administration was very clear where it stood, I’m not sure Democrats know exactly where they stand on the border. Campaigning against Trump’s policies was one thing. It is a lot harder once you get into office and you need to have a position of your own.

SHEAR: Yeah, I agree with all that. Title 42 underscores what has been the problem for a long time: It’s not only finding solutions — which is hard enough — but it’s defining what you really think the problem is.

Trump and his allies defined the problem one way. Somebody on the Democratic side might define the problem as a lack of ability to quickly provide an asylum seeker an answer to whether or not they should be allowed to stay in the United States permanently.

Until the country really grapples with all of this, it’s going to continue to be a mess at the border.

— Leah (Blake is on vacation)