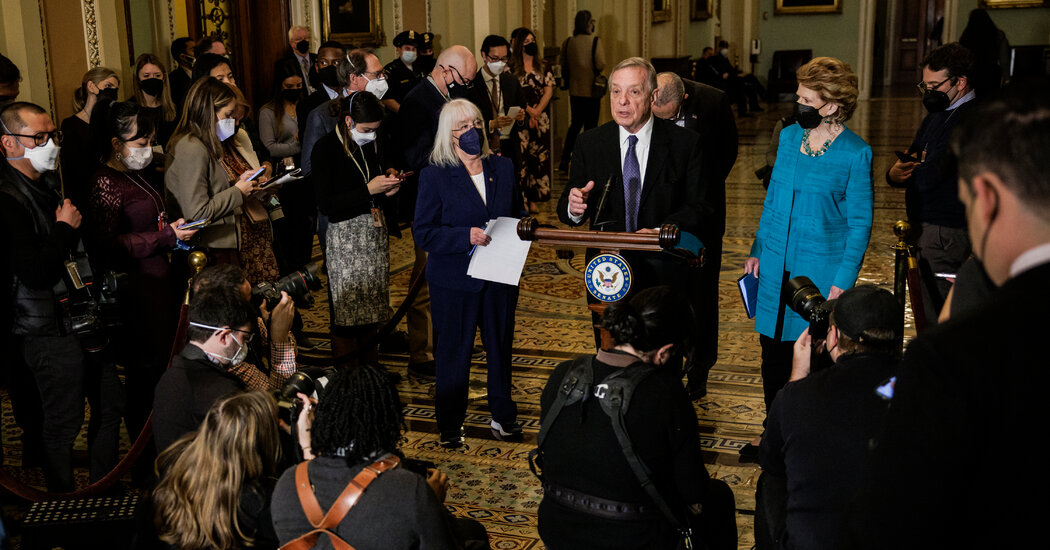 President Biden’s nomination of Judge Ketanji Brown Jackson to the Supreme Court immediately touched off intense Senate scrutiny of her record and initiated a well-established confirmation process that has become as much about politics and ideology as judicial record and professional background.

With the identity of Mr. Biden’s choice now known, Senate Democrats and Republicans and their allied interest groups will begin making their competing cases on Judge Jackson in the hope of quickly establishing a portrait of her in the public’s mind.

Democrats have set early April as a goal for winning Senate confirmation, with plans to convene Judiciary Committee hearings toward the end of March.

Top Democrats have said they would like to see the Senate vote on Judge Jackson by April 8, before a scheduled two-week recess. The fact that she underwent Senate review for her seat on the U.S. Court of Appeals for the District of Columbia Circuit less than a year ago should bolster the chances of sticking to that timeline.

But the conflict in Ukraine and the Washington focus on it could potentially upset the plans and slow her consideration.

First up: Meetings with senators

The Senate process will begin in earnest next week when Judge Jackson travels to the Capitol for courtesy meetings with Senate leaders and top members of the Judiciary Committee, as well as other senators the White House sees as crucial to winning confirmation.

The meetings are largely ceremonial, get-acquainted sessions, though some lawmakers use the closed-door sessions as opportunities to try to drill down on the nominee’s views. They can also produce some problems, as happened in 2017 when Justice Neil M. Gorsuch, then President Donald J. Trump’s first high court nominee, took issue with Mr. Trump’s criticism of the federal judiciary during a meeting with a Democratic senator, angering the president.

Along with the meetings on Capitol Hill, the nominee and her support team will need to answer an in-depth questionnaire from the Judiciary Committee that seeks to create an exhaustive record on such topics as speeches, writings and past cases.

Then: ‘Murder boards’ and a committee vote

At some point during the coming weeks, the nominee will also take part in mock hearings known as murder boards to practice responses to the sort of grilling anticipated from Republicans. In recent confirmation hearings, nominees have generally avoided providing substantive answers on most major issues and spoken in more general terms about their views on the courts and the Constitution.

Given the 50-50 split in the Senate, the Judiciary Committee led by Senator Richard J. Durbin, Democrat of Illinois, is itself evenly divided, with 11 Democrats and 11 Republicans. If no Republicans on the panel vote to send the nomination to the floor, Democrats will have to take extra steps to force it out of the committee.

While Justice Amy Coney Barrett was raced through confirmation hearings and on to the court right before the 2020 presidential election, the time between nomination and the start of public hearings has usually been about 45 days. Given how Republicans dashed through Justice Barrett’s confirmation, Democrats are trying to shorten the process while avoiding criticism of moving too quickly.

Finally: Senate hearings that could be contentious, and a final vote

Counting her approval last year, Judge Jackson has previously been confirmed three times by the Senate — once for the appeals court post, once for a Federal District Court seat in 2013 and also in 2010 to head up the federal sentencing commission. The Senate took a roll-call vote only on the appeals court post and she was confirmed last June 53-44.

But the review of a Supreme Court nominee is in a class by itself, and the previous outcome is no guarantee that she can garner the same level of support.

Though recent confirmation fights have been blistering affairs, Senate Republicans led by Mitch McConnell of Kentucky, the minority leader, have so far mainly held their fire. That is in part because the new justice is not expected to change the ideological makeup of the court. Republicans also recognize the political risks of taking too hard a line against the first Black woman nominated to the high court, though a few have criticized Mr. Biden for confining his search by race and gender.

In Kentucky this week, Mr. McConnell said he was not troubled by Mr. Biden’s decision to pledge to select a Black woman. He also said that he expected that the nominee “will be respectfully vetted with the kind of process I think you could be proud of.”

However, some Republican members of the Judiciary Committee have previously raised objections to Judge Jackson’s record and views and can be expected to do so again in the high-profile setting of a Supreme Court confirmation hearing. A handful of Republicans on the panel are considered potential presidential candidates in 2024 and will want voters to see them sharply challenging Mr. Biden’s nominee.