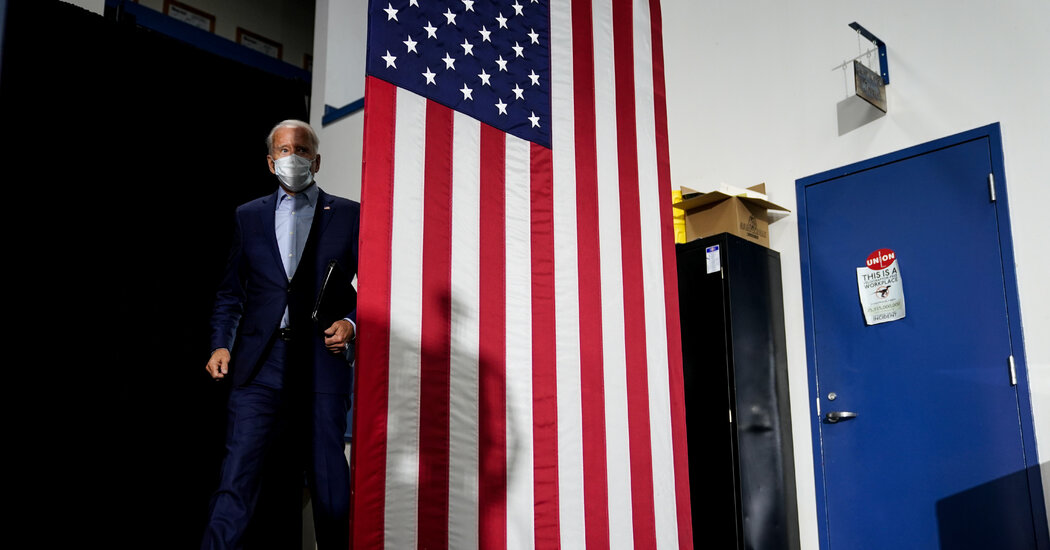 WASHINGTON — Liberal activists have opened a new front in their battle to push Joseph R. Biden Jr. to the left on climate change: a campaign to pressure the Democratic presidential nominee to reject advisers with any ties to fossil fuel companies.

The targets include former Energy Secretary Ernest Moniz, former Interior Secretary Ken Salazar and others who served in the Obama administration.

Last week more than 60 deep-pocketed donors asked Mr. Biden to commit to a moratorium on all new coal, oil and natural gas development — and to select advisers who are “free from fossil fuel influence.” The group, which includes Kathy Washienko, a clean-energy investor in Seattle; Robin Chase, a co-founder and former chief executive of Zipcar; and Adelaide Park Gomer, the president of the Park Foundation philanthropic group and a longtime anti-fracking activist, implored Mr. Biden to “choose new, bolder leadership” than those with whom he worked under President Barack Obama.

“This incumbency of old ideas (like ‘all of the above’ energy policy) must end,” the donors wrote.

The effort comes just days after Mr. Biden denounced President Trump as a “climate arsonist” and made the case that Americans suffering from wildfires, floods and hurricanes could not afford four more years of a climate-change denier in the White House. Even many of Mr. Biden’s persistent critics on the left described it as the most aggressive and detailed policy speech on climate change ever given by a presidential candidate.

The campaign held a phone bank on Thursday devoted to climate change, at which a campaign official, David Kieve, described Mr. Biden as having “the most progressive set of climate policies that anyone has ever run on in a general election before in history, period.”

Varshini Prakash, the executive director of the Sunrise Movement, a youth-led group that has been skeptical of the former vice president, praised Mr. Biden’s address as “one of the best climate speeches that a Democratic presidential candidate has made.”

“He has moved a thousand yards on this in the last year and a half, and I believe it shows leadership,” Gov. Jay Inslee of Washington said in an interview.

Environmental groups have tried and failed to convince Mr. Biden to call for a nationwide ban on fracking. He has pledged a ban on new oil and gas permitting on public lands and waters but assured union leaders in critical swing states like Pennsylvania that he will protect existing fracking jobs while pursuing a clean energy transition.

At a CNN town hall on Thursday, Mr. Biden insisted that hydraulic fracturing for natural gas, or fracking, “has to continue because we need a transition” to renewable energy.

“The worry for those of us who want to see bolder action is that Biden isn’t going to be willing to move further,” said Jamie Henn, director of Fossil Free Media, a group that this month distributed a letter from 145 environmental organizations calling on Mr. Biden to bar fossil fuel executives, lobbyists and representatives from his campaign and administration.

The list of those targeted includes Mr. Moniz, who in 2018 joined the board of Southern Company, an electric utility that sued the Obama administration over its Clean Power Plan climate change regulations. Another target: Mr. Salazar, Mr. Obama’s first interior secretary, who is now a partner at the law firm WilmerHale and in 2019 opposed a planned overhaul of oil and gas regulations in Colorado. In July, the campaign named Mr. Salazar a co-chairman of its Latino leadership committee.

Lesser-known aides to Mr. Obama who have come into the groups’ cross hairs include Heather Zichal, an architect of the Clean Power Plan who served on the board of Cheniere Energy, a liquefied natural gas company, and Jason Bordoff, a former senior director on the National Security Council who founded the Center on Global Energy Policy at Columbia University’s School of International and Public Affairs. The university, like many academic institutions, accepts funding from energy companies.

“We can’t have people who are beholden to the fossil fuel industry in any way shape or form,” said Barbara Beseda Grasseschi, a Democratic fund-raiser in Sonoma County, Calif., who along with her husband, Tony Crabb, signed the Democratic donors’ letter.

Organizers shared the letter but not the full list of signatories.

The Biden campaign declined to comment, but a spokeswoman for the Trump campaign, Courtney Parella, called Mr. Biden “an empty vessel filled by the radical left’s agenda.”

John Holdren, Mr. Obama’s chief science adviser and a professor of environmental policy at Harvard University, said the effort was “misguided.” Mr. Holdren called Mr. Moniz “the best energy secretary in history,” noting he helped develop the goals of the Paris Agreement on climate change. Most researchers, including himself, had accepted funding from energy companies, he said, and have pushed the private sector to tackle climate change.

“We are not going to solve the climate problem over the dead bodies of the private sector,” Mr. Holdren said.

In a statement, Mr. Salazar said of Mr. Biden, “As vice president, he helped spearhead the effort that unleashed the renewable energy revolution including permitting over 20,000 megawatts of renewable energy on public lands. In implementing the Biden climate change agenda, I am certain he will surround himself with the best people to implement that agenda.”

Mr. Moniz said in a statement, “Everything must be on the table to meet the challenging but essential target of net-zero emissions by midcentury,” adding, “Building broad coalitions, bringing together labor, industry, policymakers and the environmental community, will be essential.”

At the heart of the debate is averting the worst consequences of climate change and what role natural gas should continue to play.

Scientists widely agree that net emissions of planet-warming carbon dioxide must be zero by 2050. Mr. Biden has laid out a plan to spend $2 trillion over four years to support clean energy, electric vehicles and energy-efficient homes. Emissions from the power sector would be eliminated by 2035.

The Obama administration argued that natural gas, which produces about half the carbon emissions as coal but also emits methane, another greenhouse gas, is a necessary “bridge” to clean power. Its growth is a large reason U.S. emissions have declined over the past decade.

Yet many energy experts agree that the United States no longer needs to build new natural gas plants to meet energy demands. Currently the United States meets just under 40 percent of its electricity demand through clean energy — a mixture of nuclear power and renewables like wind and solar. A recent report by GridLab, a private think tank, and the University of California at Berkeley’s Goldman School of Public Policy found that the United States could reach 90 percent clean energy by 2035 without increasing customer bills from today’s levels.

Leah C. Stokes, an energy policy expert at the University of California, Santa Barbara, said the final 10 percent would quite likely come from natural gas, playing “a somewhat marginal backup role in the system.”

Mr. Biden has cited climate change as one of “four historic crises” facing the country, along with the coronavirus, the economic downturn and racial injustice. Mr. Biden can use it to draw a sharp contrast with Mr. Trump, whose disregard for science links his approach to environmental policy with his handling of the pandemic.

Mr. Biden has also taken care to frame combating climate change as an economic opportunity. At a virtual fund-raiser on Thursday whose hosts included Mr. Salazar, Mr. Biden said: “When Trump thinks of climate change, he can barely muster one word. He calls it a hoax. I think of one word, too: jobs.”

As the fight over personnel heats up, climate experts also are pressing Mr. Biden to continue playing offense. Democratic strategists say that is likely to energize younger voters, who prioritize climate change, while also appealing to college-educated suburban voters put off by the president’s science denial.

Lisa Friedman reported from Washington, and Thomas Kaplan from Connecticut.