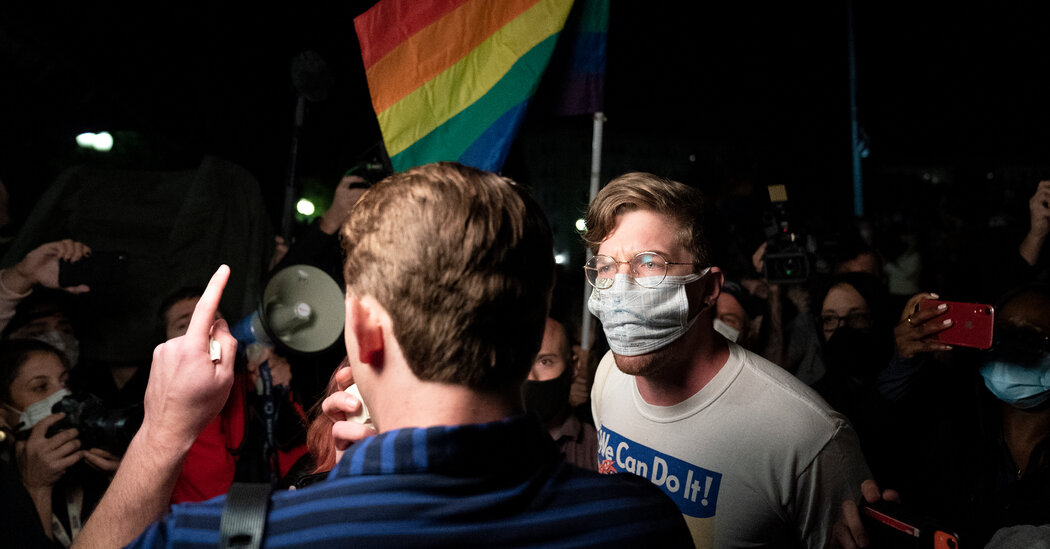 WASHINGTON — Just hours after Justice Ruth Bader Ginsburg’s death was announced on Friday, the leaders of three of the left’s most potent advocacy groups, Demand Justice, Naral Pro-Choice America and Indivisible, were on a call with 1,000 progressive activists and strategists to begin to unfurl a plan they hoped they would not have to use.

Demand Justice, a relatively new group led by the longtime Democratic aide Brian Fallon to match the powerful conservative legal apparatus, quickly pledged to spend $10 million “to fight to ensure no justice is confirmed before the January inauguration.”

At the same time, a coalition of President Trump’s conservative allies said Saturday that it was preparing for an intense confrontation over Justice Ginsburg’s seat, and was gearing up for a lobbying and public relations blitz.

The message: Move quickly to replace her.

“Tensions are very high politically,” said Carrie Severino, the president of Judicial Crisis Network, a group that has long pressed for conservative jurists for the court. “We expect this will be a major, major battle.” Asked about the pledge by Democratic groups to spend at least $10 million to prevent a confirmation, Ms. Severino said, “We will match their $10 million and whatever it takes.”

The announcement of Justice Ginsburg’s death on Friday night plunged the nation’s capital into what is certain to be an especially fierce and costly clash as liberals seek to stop Mr. Trump and the Republican-led Senate from confirming a replacement before Inauguration Day. On Saturday, Mr. Trump said he expected to nominate a candidate to fill the seat in the next week and urged Senate Republicans to follow suit. Senator Mitch McConnell, the Republican leader, said late Friday he would hold a vote on a nominee, but did not indicate when, constrained by a narrow majority.

Both sides have been bracing for this moment for years. But few expected the fight over the court’s direction to take place in the final weeks of a polarizing presidential election and in the middle of a devastating pandemic.

Confirmation of a conservative jurist to succeed Justice Ginsburg, one of the court’s most liberal stalwarts, in the weeks and months ahead could cement a right-leaning ideology on the nation’s highest court for decades to come, providing Mr. Trump with a lasting legacy whether he wins re-election or not.

The prospect of that outcome has galvanized Democrats, who vowed Saturday to put into motion a long-planned campaign to make the case that Justice Ginsburg’s vacancy must not be filled until after the American people have chosen the next president and decided who will control the Senate.

“Progressives will fight with everything they have to make sure that this seat does not get filled,” Nan Aron, the president of the Alliance for Justice and a fixture of Washington legal fights for decades, said in an interview. “Progressives are ready for this fight.”

The passion among liberals was underscored Friday night when Democratic donors shattered records on ActBlue, a donation-processing site, giving more than $6.2 million in the hour after Justice Ginsburg died. By noon Saturday, donations had topped $45 million.

Specific spending plans for Demand Justice had not yet been completed on Saturday, but a person familiar with them said the money would largely be spent targeting critical swing states, like Maine, North Carolina and Arizona, where Republican senators whose votes could decide the future of the seat are on the ballot this fall.

“A lot of the focus right now is on the Republican hypocrisy,” said Christopher Kang, chief counsel and a co-founder of the group. “Really the stakes are so much bigger than that. The future of the Affordable Care Act is now on the line.”

An umbrella of progressive groups announced a candlelight vigil for Saturday night outside the Supreme Court, and more in cities across the country, to honor Justice Ginsburg and kick-start what they hope will be a public show of force to trip up Republicans’ rush to fill the seat. Indivisible, whose national network sprang up in opposition to Mr. Trump, began rolling out scripts urging its members to flood Senate offices with phone calls.

Ms. Aron’s group, which scrubs possible conservative nominees and works closely with Senate Democrats to build coalitions of law experts and teachers, has already worked through each person on Mr. Trump’s list of 20 possible nominees and concluded none would be “acceptable.”

The lobbying on both sides resembles past confrontations in which Republicans and Democrats jousted over the ideological direction of the court. In 2016, Democrats mounted a fierce campaign to persuade the Republican Senate to confirm President Barack Obama’s choice of Judge Merrick B. Garland after the death of Justice Antonin Scalia.

That effort failed when Mr. McConnell successfully denied Judge Garland a hearing or a vote. The Senate eventually confirmed Mr. Trump’s nominee, Justice Neil M. Gorsuch, to fill the seat, and Democrats’ rage over what they saw as an illegitimate power play still animates their views of Republicans and the court.

In 2018, the vitriolic fight over the nomination of Justice Brett M. Kavanaugh played out against the backdrop of pivotal midterm elections, costing tens of millions of dollars before it was over.

This time, the fight over the court will compete for the attention of voters and politicians. With the nation’s televisions already saturated with hundreds of millions of dollars’ worth of political advertising around the presidential election and races up and down the ticket, super PACs and campaigns will face their own decisions over how much airtime to dedicate to the issue.

And the stakes could be even higher. A conservative replacement for Justice Ginsburg has the potential to shift the court’s judgment on core issues for the Republican establishment: abortion, gun rights, taxes, religious liberty, immigration, health care and more.

Ms. Severino said her group was preparing a “huge grass-roots network” and would broadcast television ads as well as use social media to demand that the Senate quickly confirm a Trump nominee to the court. She said the fight over Justice Kavanaugh’s nomination to the court was a “knock-down, drag-out, bloody fight and I expect this will be a hard-fought battle.”

Heritage Action, the political advocacy arm of the conservative Heritage Foundation that spent millions in 2018 pushing for the confirmation of Justice Kavanaugh, called late Saturday for the “swift” confirmation of a new justice. It did not immediately detail its plans to try to make that happen.

“Conservatives will not waver in our support and resolve for a speedy and fair process,” said Jessica Anderson, the group’s executive director. “Republicans must exercise the power of confirmation that voters have entrusted in them and fulfill their constitutional obligations. The American people depend on this.”

In this case, the fight will take on an added dimension: With 23 Senate seats held by Republicans on the ballot this fall, the fight over replacing Justice Ginsburg, centered in Washington, will sprawl across the country from Maine, where Senator Susan Collins, a moderate, is fighting for her political life; to South Carolina, where the Judiciary Committee chairman, Senator Lindsey Graham, is facing a tighter than expected race; and to Arizona, where the results of a special election between Mark Kelly, a Democrat, and Senator Martha McSally on Nov. 3 could tilt the balance of the Senate even before 2021.

As Justice Ginsburg was battling cancer, the prospect of a looming Supreme Court confirmation battle had already been squarely at the center of the fall’s political campaigns.

The Susan B. Anthony List, an anti-abortion organization, announced Saturday that it would add $500,000 to its election-year budget of $52 million to specifically mobilize grass-roots support on behalf of quickly confirming whoever Mr. Trump nominates.

The group had already hoped to contact four million voters through digital ads, direct mail and in-person communications aimed primarily at stressing the importance of having a conservative court to oppose abortion. After Justice Ginsburg’s death, the organization will increase that goal to seven million voters, said Mallory Quigley, a spokeswoman for the group.

“The passing of Justice Ginsburg and the ensuing fight to nominate a replacement — this really puts abortion front and center in voters’ minds,” Ms. Quigley said. “It sharpens everything we’ve been doing.”