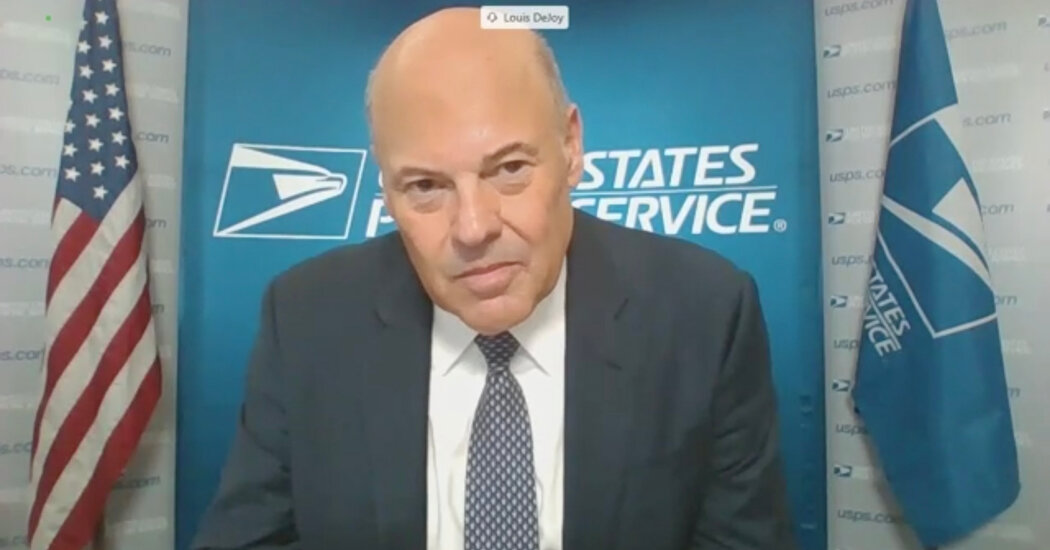 WASHINGTON — Louis DeJoy, the embattled postmaster general whose cost-cutting and operational changes have prompted widespread concern about mail-in voting, said on Friday he was “extremely, highly confident” the Postal Service could handle the largest vote-by-mail program in American history. He said it was “outrageous” for Democrats to suggest that he might intentionally slow ballot delivery to help President Trump.

Testifying before Congress for the first time amid a sharp backlash, Mr. DeJoy, a major donor to Mr. Trump, defended many of the changes as necessary to help the Postal Service get its financial house in order. He acknowledged that the moves have slowed some mail delivery and reiterated that he would suspend his cost-cutting measures until after the election.

“There has been no changes to any policies with regard to election mail,” Mr. DeJoy told the Senate Homeland Security and Governmental Affairs Committee, adding, “The Postal Service is fully capable and committed to delivering the nation’s election mail fully and on time.”

Under intense pressure from Democrats, however, he refused to reverse other steps, like removing hundreds of blue mailboxes and mail-sorting machines, that he said his predecessors had initiated in response to a steady decline in mail volume. He told senators that he did not know about the machine removal when it began, saying it was “not a critical issue within the Postal Service.”

And he was unable to offer many specifics about how the Postal Service would ensure on-time delivery of ballots this fall, telling Senator Maggie Hassan, Democrat of New Hampshire, that he would be unable to provide a detailed plan by Sunday because it was still being drafted.

Mr. DeJoy said he would continue the agency’s practice of prioritizing election mail, regardless of what postage is used, and “deploy processes and procedures that advance any election mail, in some cases ahead of first-class mail.”

As Mr. DeJoy testified on Friday, a coalition of six states and the District of Columbia filed a lawsuit against him, the Postal Service and the chairman of its board of governors, Robert M. Duncan. The attorneys general assert that Mr. DeJoy’s recent changes have resulted in widespread delays that could have a disastrous effect for voting by mail this November. His recent announcement, suspending many new initiatives, did not address several of his measures, the states claim.

Concerns about the ability of Americans to vote by mail during a pandemic have been heightened by Mr. Trump, who has criticized the Postal Service as a “joke” and renewed his attack on mail-in voting hours after Mr. DeJoy finished assuring lawmakers that the process was the Postal Service’s No. 1 priority.

“You’ll have double voting — where they send in a ballot, then they’ll go and vote,” Mr. Trump said in remarks to a conservative group of supporters in Virginia. “That’s going to be a big problem. They’ll send in their ballot and they’ll vote, too. They’ll send in the ballot. What are the chances that some states so efficiently run — ‘Oh, gee, you can’t vote, we just got your ballot last night at seven o’clock.’ I mean think of how ridiculous it is, right? Common sense.”

Mr. DeJoy said he had “never spoken to the president about the Postal Service, other than to congratulate me when I accepted the position.”

But he did not back down from his plans to radically overhaul the beleaguered Postal Service, saying he foresees “dramatic” changes after the election in November, including rate increases and new service standards in rural America, as ways to cut costs.

“We are considering dramatic changes to improve the service to the American people, yes,” Mr. DeJoy said, later adding that “I would like to be liberated on pricing.”

“If we just throw $25 billion at us this year and we don’t do anything, we’ll be back in two years,” Mr. DeJoy said, referring to an emergency approval of cash the House planned to approve on Saturday to help the Postal Service weather the coronavirus pandemic.

The new postmaster general, who has been on the job fewer than 70 days, pushed back on claims that he had cut overtime for mail carriers and he defended attempts to cut down on late and extra delivery trips.

He said agency statistics when he arrived showed that 12 percent of the trips mail carriers made each day were running late and that thousands of extra trips were being made to account for missed mail — performances that he argued would be unacceptable at private delivery services like FedEx. Carrying out the changes had been rockier than expected, he conceded, though he initially played down the effect.

Over two hours of fierce scrutiny, Democrats and some Republicans demanded fuller explanations and documentary evidence about delayed mail, particularly medicines that were not delivered in a timely manner. Democrats, in particular, reprimanded Mr. DeJoy for being overly secretive and not providing data to support the moves he had undertaken.

Pressed by Senator Rob Portman, Republican of Ohio, with the “heartbreaking stories” of Americans, including veterans, missing medicine because of those delays, Mr. DeJoy offered a measured apology.

“Senator, we are working here feverishly to get the system running at stability and also to hire more workers to handle the delivery process,” he said. “We all feel bad about what the dip in our service, the level it has been.”

But he turned down attempts by Senator Jacky Rosen, Democrat of Nevada, to get him to commit to providing transcripts or minutes of all closed, nonpublic board of governor meetings, as well as an analysis of the effect of the changes on veterans, working families and older Americans.

Mr. DeJoy said he would try to provide “the analysis that designed the truck schedule that I directed.”

Senator Gary Peters of Michigan, the top Democrat on the Senate panel, gave his own repeated lashings. He told Mr. DeJoy that his decisions “have cost Americans their health, their time, their livelihoods and their peace of mind.”

“I believe you owe them an apology for the harm you have caused,” Mr. Peters said.

Senator Ron Johnson, Republican of Wisconsin and the committee chairman, stepped in to defend Mr. DeJoy from what he called a “false narrative being ginned up” by Democrats to hurt Republicans politically. He suggested near the end of the hearing that the mail-related complaints constituents sent his office were “very highly scripted like this could be a very well organized effort which doesn’t surprise me in the slightest.”

Lawmakers in both parties were most concerned that the post office might not be able to handle a crush of mail-in ballots for the 2020 election in the middle of a pandemic.

Senator Mitt Romney, Republican of Utah, told Mr. DeJoy there were “pretty good reasons for people to think that you or your colleagues are purposefully acting to suppress voting or that you are going to purposely prevent ballots from being counted.” He asked for assurances that ballots sent in the final days before the election would be counted.

Mr. DeJoy said “we will scour every plant each night leading up to Election Day” for ballots. He also testified that the agency planned to send a letter to every American next month explaining its plans for safely transmitting ballots. On Friday, the Postal Service also unveiled a new “Election Mail website” to serve as a resource for voters seeking to avoid voting in person during the pandemic.

Mr. DeJoy’s defense on Friday came a day after the former vice chairman of the Postal Service’s board of governors offered lawmakers a scathing account of the agency under the Trump administration.

David C. Williams, a former Postal Service inspector general who resigned as vice chairman in protest in April, accused the Treasury secretary, Steven Mnuchin, of trying to engineer a hostile takeover of the service. Mr. Mnuchin required members of the independent board to “kiss the ring” before they were confirmed and issued demands that agency officials believed were “illegal,” he said. Mr. Williams warned that Mr. Mnuchin’s demands, some of which Mr. DeJoy appeared intent on carrying out, would drive the agency with centuries-old roots into the ground.

Mr. Williams also cast doubt on Mr. DeJoy’s qualifications for the job and the process by which he was selected to lead the agency.

Mr. DeJoy, who appeared by video conference, is scheduled to return before Congress on Monday for another hearing, this time with the House Oversight and Reform Committee, a more hostile, Democratic-led panel.