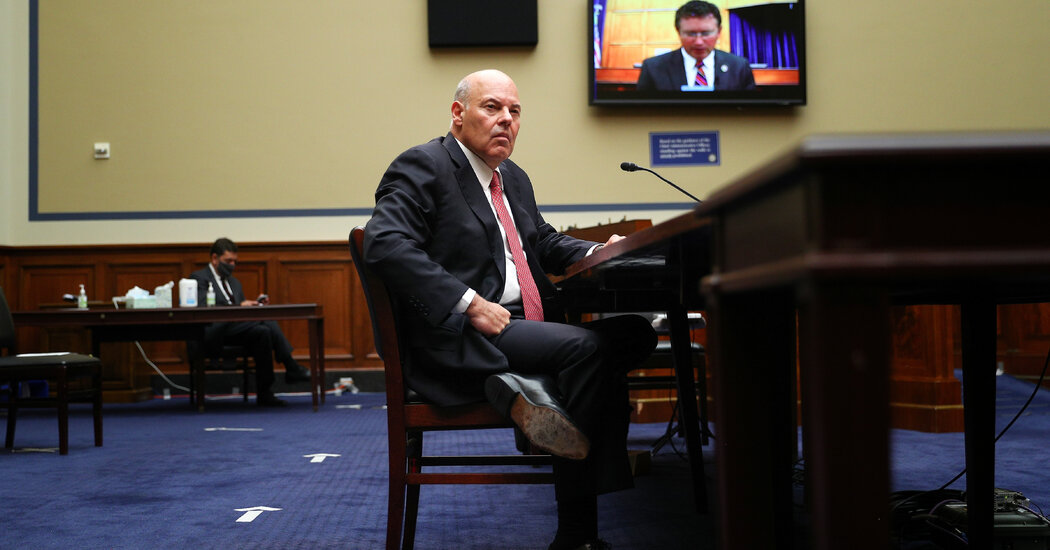 Postmaster General Louis DeJoy told Congress on Monday that the Postal Service could be trusted to carry out the largest vote-by-mail program in American history without political bias, even as President Trump repeated baseless accusations that mail-in voting would be used by his rivals to rig the November election against him.

Under tough questioning by Democrats on the House Oversight Committee, Mr. DeJoy, a major donor to Mr. Trump and other Republicans, mounted an outraged defense of the modifications he has made at the Postal Service that have thrust the agency into a political firestorm, denying that they were motivated by partisanship. He refused to commit to reversing the changes, which he characterized as vital cost-cutting measures for a cash-strapped agency badly in need of an overhaul, and scolded Congress for failing for years to attend to the post office’s financial woes.

While he conceded that some of the changes he had put in place, such as reducing overtime and limiting trips, had caused service delays, Mr. DeJoy maintained that the issues were being rectified and hotly denounced suggestions from Democratic lawmakers that he was working to help Mr. Trump politically.

“I am not engaged in sabotaging the election,” Mr. DeJoy told lawmakers.

But even as he spoke, Mr. Trump was delivering an extraordinary diatribe against voting by mail in a surprise appearance at the Republican National Convention in Charlotte, N.C., where he sought to sow mistrust in the process and claimed without evidence that Democrats were “using Covid to steal the election.”

The performance made for an awkward contrast with Mr. DeJoy, who spent the day trying to reassure Congress about the Postal Service’s role in helping to administer an election without political influence. Reiterating comments he made last week before a Senate panel, Mr. DeJoy criticized the “false narrative” that he said was being promoted about both his intentions and the changes at the agency, which he described as necessary to address the Postal Service’s financial challenges. Civil rights groups, state attorneys general and Democrats have asserted instead that they are part of a concerted attempt, directed by Mr. Trump, to disenfranchise voters.

Mr. Trump has worked to stoke concerns about Americans’ ability to reliably cast their ballots by mail during the coronavirus pandemic, criticizing the Postal Service as a “joke.”

“All the Radical Left Democrats are trying to do with the Post Office hearings is blame the Republicans for the FRAUD that will occur because of the 51 Million Ballots that are being sent to people who have not even requested them,” he said on Twitter as the session got underway. “They are setting the table for a BIG MESS!”

Mr. DeJoy conceded on Monday that the president’s disparagement of mail-in voting was “not helpful.” But he said that while he was “very concerned with the deterioration in service,” the agency was “seeing a big recovery this week.” Pressed by Representative John Sarbanes, Democrat of Maryland, to put his assurances in writing, Mr. DeJoy committed to giving the panel “an update on the improvement of the service” by next Monday.

But Democrats were not satisfied with Mr. DeJoy’s explanation for the delays, and the hearing turned testy when Representative Stephen F. Lynch, Democrat of Massachusetts, accused Mr. DeJoy of “incompetence” and asked “how can one person screw this up” in just a few weeks. He repeatedly asked whether Mr. DeJoy, who began the job in June, would return the mail-sorting machines that had been removed from post offices.

“I will not,” Mr. DeJoy barked in response, adding that Mr. Lynch had spread “misinformation” during his questioning. Mr. DeJoy has previously argued that the machines are “not needed.”

Representative Jim Cooper, Democrat of Tennessee, asserted that Mr. DeJoy’s operational changes at the Postal Service amounted to an in-kind contribution to the Trump campaign because of the delays they had caused in the run-up to the November election. The postmaster general bristled, calling the claim “outrageous” and telling Mr. Cooper that he resented it.

He grew increasingly agitated under questioning from Representative Ro Khanna, Democrat of California, about restoring decommissioned sorting machines. After Mr. DeJoy acknowledged that replacing the machines would most likely cost less than $1 billion, Mr. Khanna pressed Mr. DeJoy on why the agency would not commit to restoring the machines to assuage the concerns of an anxious electorate.

“You have no way of getting us $1 billion,” Mr. DeJoy shot back. “We haven’t been funded in 10 years. You can’t pass any legislation. Get me the billion and I’ll put the machines in.”

The House approved a bipartisan bill on Saturday that would grant the beleaguered agency a $25 billion infusion to ensure it has the resources to address what is expected to be the largest vote-by-mail operation in the nation’s history and to cover revenue lost because of the pandemic, but it is unlikely to be taken up by the Republican-controlled Senate.

Representative James R. Comer of Kentucky, the top Republican on the Oversight Committee, chastised Democrats in his opening remarks for spreading a “baseless conspiracy theory about the Postal Service” and hastily moving over the weekend to pass the legislation.

He said Mr. DeJoy was taking good-faith steps to cut costs and noted that he took responsibility for the delays, which Mr. Comer called “temporary growing pains.” And he pointed out that the recent removal of blue mailboxes and mail sorting machines was long planned and consistent with actions taken under Mr. DeJoy’s predecessor.

“I am disappointed at the hysterical frenzy whipped up around this issue by my colleagues on the left and their friends in the media,” Mr. Comer said.

But Representative Gerald E. Connolly, Democrat of Virginia, told Mr. DeJoy that there was ample reason for lawmakers — and voters — to be skeptical of his motives.

“Six weeks into the complex and awe-inspiring new job in the midst of a global pandemic and just weeks before a consequential national election where the Postal Service will play an unprecedented role,” he said, Mr. DeJoy “decides to announce a sweeping reorganization that he admits could slow down mail and will undoubtedly infuse uncertainty and confusion throughout the Postal Service and into our neighborhoods all across America.”

Democrats also seized on Mr. DeJoy’s financial records — his extensive donations to Republican officials and his continuing financial ties to companies that contract with the Postal Service — and asked whether he could credibly run an independent agency. Mr. DeJoy vehemently responded that he could, and that he had complied with all the ethics obligations required of him. As the hearing wore on, he appeared to grow weary at times trying to prove that his intentions were good.

“I am a Republican, sir,” Mr. DeJoy said, responding to a question from Representative Peter Welch, Democrat of Vermont, about the millions he gave to Republicans. “For the record, I give a lot of money to Republicans.”

Mr. DeJoy said his decision to cut down on late and extra shipments of mail was based on a “fundamental, basic principle: Run your trucks on time.”

“I would not know how to reverse that now,” he said. “Am I to say, ‘Do not run the trucks on time?’ Is that the answer that we are trying to get me to say here today?”

“You can blame me for this,” he concluded, “but these conditions have been around long before my time, and they need to be addressed.”

As the hearing wound toward a close, Democrats quizzed Mr. DeJoy about the agency he leads. Representative Brenda Lawrence of Michigan, who worked at the Postal Service for three decades, asked whether he knew the section of the United States code enumerating the agency’s mandate.

Representative Katie Porter, Democrat of California, asked him the price of a first-class stamp. Mr. DeJoy answered correctly, but was unable to recall the cost of mailing a postcard.

“I’ll submit that I know very little about a postage stamp,” he told Ms. Porter.

Mr. DeJoy also could not say how many Americans had voted by mail in the 2016 election.

“I’m glad you know the price of a stamp, but I’m concerned about your understanding of this agency,” Ms. Porter said. “And I am particularly concerned about it because you started taking very decisive action when you became postmaster general.”