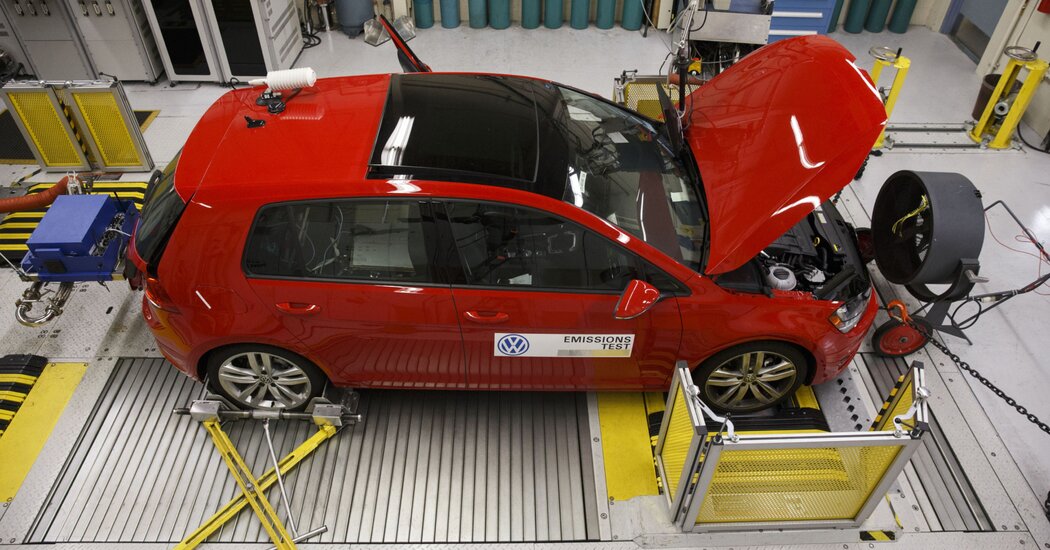 WASHINGTON — California on Monday finalized a legal settlement with five of the world’s largest automakers that binds them to comply with its stringent state-level fuel efficiency standards that would cut down on climate-warming tailpipe emissions.

Monday’s agreement adds legal teeth to a deal that California and four of the companies outlined in principle last summer, and it comes as a rejection of President Trump’s new, looser federal rules on fuel economy, which would allow more pollution into the atmosphere.

Mr. Trump was blindsided last summer when the companies — Ford, Honda, BMW and Volkswagen — announced that they had reached a secret deal with California to comply with that state’s standards, even as the Trump administration was working to roll back Obama-era rules on fuel economy. A fifth company, Volvo, said in March that it intended to join the agreement and is part of the legal settlement that was finalized on Monday.

After last summer’s announcement, Mr. Trump escalated his legal and rhetorical attacks on California. He accelerated the release of a rule to revoke California’s legal authority to set its own state-level standards, writing on Twitter that doing so would “produce far less expensive cars for the consumer, while at the same time making the cars substantially SAFER.” His administration dismissed the California deal as a meaningless “voluntary stunt.”

But with the publication of Monday’s legal agreement, the “stunt” is no longer voluntary.

“We went into this voluntarily, but it is now binding, it’s enforceable,” said Spencer Reeder, director of government affairs and sustainability at Audi of America, who helped to negotiate the agreement on behalf of Volkswagen, Audi’s parent company.

The differences in fuel efficiency requirements will have profound impacts on the climate. Increasing fuel efficiency means vehicles burn less gasoline and emit less greenhouse gas pollution into the atmosphere. Mr. Trump’s rollback of the Obama-era rule on fuel economy amounts to the single largest step he has taken to erase his predecessor’s policies to fight climate change.

The five automakers’ deal with California amounts to a rebuke to that rollback.

And because the deal extends beyond California’s borders, the impact could be substantial. Thirteen other states follow California’s state-level standards and have agreed to enforce the new agreement. The fate of the separate standards is expected to be decided by the Supreme Court, which will most likely render judgment on a multistate lawsuit that seeks to nullify the Trump administration’s federal rule or at least to retain states’ authority to set stricter rules.

The automakers that sided with California say that their agreement will lock them into selling more fuel-efficient, lower-polluting vehicles across all the states, regardless of the White House occupant.

“This represents consistency from a policy point of view,” said Bob Holycross, vice president for sustainability, environment and safety engineering with Ford.

“Whether it is from one political party to another or the changes from elections or what the makeup of Congress is, we have to have regulatory certainty beyond just political cycles governing the investments we make,” he said.