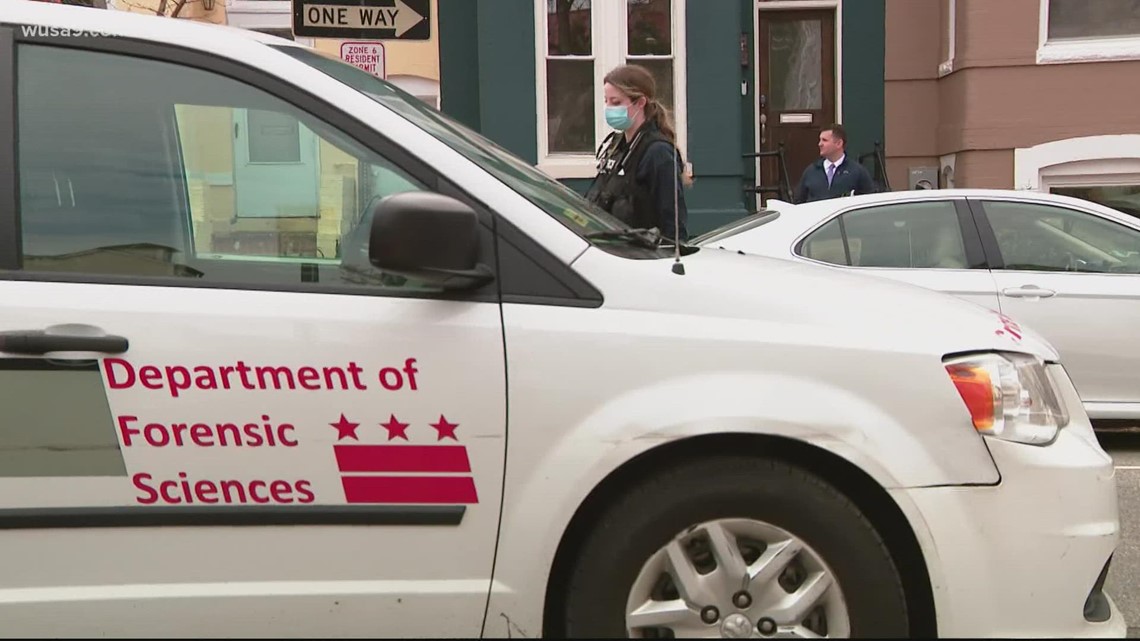 Lauren Handy and eight others were indicted this week on felony charges stemming from the 2020 invasion of an abortion clinic.

WASHINGTON — DC Police discovered five fetuses at the home of an anti-abortion activist in Capitol Hill on Wednesday, the department has confirmed to WUSA9.

Officers responded shortly after noon to a home on the 400 block of 6th Street SE to investigate a tip about potential bio-hazard material in the residence. Once inside, they located the fetuses. The remains were collected by the D.C. Office of the Chief Medical Examiner.

The home was occupied by Lauren Handy, an anti-abortion activist who was indicted along with nine others Wednesday by a federal grand jury. Handy is accused of felony conspiracy against rights for a blockade inside a D.C. abortion clinic in October 2020.

WUSA9’s camera was outside as DC Police homicide and forensic services detectives took evidence out in red biohazard bags and coolers from the rowhouse’s basement.

Handy declined to speak on camera Wednesday, but told WUSA9 she expected the raid to happen “sooner or later.” She also declined to say what was in the coolers, saying only that “people would freak out when they heard.”

“There doesn’t appear to be anything criminal about that — except for how they got into that house,” Benedict said.

Benedict said the investigation that led officers to Handy’s home was separate from the federal investigation that resulted in her indictment Wednesday. He declined to comment on whether the department was working with agencies in other states, saying it was “day one” of the case.

When I asked anti-abortion activist Lauren Handy what homicide detectives pulled out of her house Wednesday, she only said, “people will freak out when they hear.” @DCPoliceDept now says it found 5 fetuses. @wusa9 pic.twitter.com/9Uvm7JY9dQ

D.C. Superior Court records show Handy has a history of legal issues related to her anti-abortion activities. A D.C. charter school filed a civil complaint against her for trespassing in December 2015. She was arrested for unlawful assembly outside the school earlier that year, and at different locations in 2019 and in January for unlawful entry and blocking an entrance. Only of those cases resulted in more than a ticket. That case stemmed from a March 2019 arrest at the Washington Surgi-Clinic — the same clinic in the indictment Handy now faces. The charge was dropped in July 2019 for want of prosecution.

In the indictment unsealed Wednesday, prosecutors say Handy called the clinic pretending to be a woman named “Hazel Jenkins” who needed an abortion and made an appointment for the morning of Oct. 22, 2020. That morning, Handy allegedly approached a clinic employee and said she was Hazel Jenkins there for her appointment. When the employee opened the door, the indictment says, Handy and the other co-defendants forced their way into the clinic. In the process they allegedly knocked the clinic employee over, causing her to injure her ankle.

Once inside, the defendants allegedly moved chairs to block the entrance to the clinic’s treatment area and used chains and rope to tie them together.

The DOJ just unsealed an indictment against anti-abortion activist and “Catholic anarchist” Lauren Handy and eight other defendants for forcibly blocking a clinic in D.C. in late 2020. Handy and Goodman have charges pending in a similar case in Michigan. pic.twitter.com/pKJz6psjTJ

While inside, one of Handy’s co-defendants, Jonathan Darnel, allegedly live-streamed the blockade, saying at one point, “We have people intervening physically with their bodies to prevent women from entering the clinic to murder their children.”

The indictment charges all nine defendants with conspiracy against rights and clinic access obstruction. The first count is a felony carrying a maximum sentence of up to 10 years in prison.

Charged in the indictment are:

Handy, who founded the anti-abortion group Mercy Missions, hasn’t limited her anti-abortion activities to D.C. In 2019, she and another group of protesters that also included Goodman, were charged with a felony for allegedly resisting arrest at an abortion clinic in Michigan. That charge was reduced earlier this year to misdemeanor trespassing.

Laura Meyers, CEO of Planned Parenthood of Metropolitan Washington, said the group of anti-abortion activists was familiar to her.

“They have protested at our facility on 4th Street many times and have been disruptive,” Meyers said. “They have harassed patients, they have obstructed patients and no one should have to experience that intimidation for trying to access health care.”

Darnel as well has been involved in other anti-abortion protests in the D.C. area. In 2019, WUSA9 reported that he joined a group of protestors who set up outside Dunbar High School with graphic anti-abortion posters.

WUSA9 is now on Roku and Amazon Fire TVs. Download the apps today for live newscasts and video on demand.

Download the WUSA9 app to get breaking news, weather and important stories at your fingertips.

Sign up for the Get Up DC newsletter: Your forecast. Your commute. Your news.

Sign up for the Capitol Breach email newsletter, delivering the latest breaking news and a roundup of the investigation into the Capitol Riots on January 6, 2021.